Please ensure Javascript is enabled for purposes of website accessibility
Log In Help Join The Motley Fool
Free Article Join Over 1 Million Premium Members And Get More In-Depth Stock Guidance and Research
By David Jagielski - May 11, 2021 at 6:33AM

The global company has many different paths for growth moving forward.

Last week, Tilray (TLRY) and Aphria formally merged to form a new company. It instantly became the industry leader in the Canadian pot market. Their annual pro forma revenue when they announced the deal in December 2020 totaled 874 million Canadian dollars, which is 73% higher than the CA$506 million that industry giant Canopy Growth generated over its last four quarters.

And with a presence in multiple countries, there are many more markets that Tilray can turn to in order to generate more growth. Now that the deal is complete, investors may be wondering what the next steps are for the new company (which will retain the name "Tilray") and what they should expect. Let's consider the company's future and examine whether it is a good buy today. 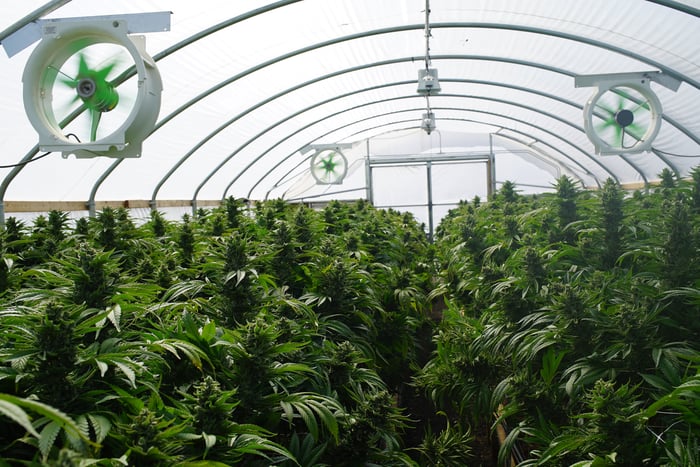 Here's how long it may take to integrate the businesses

As with any merger and acquisition, the two parties need to come together and make the necessary changes to ensure they are operating efficiently and that there are no redundancies. Tilray projects that within 18 months it will achieve pre-tax cost savings of CA$100 million (on an annual basis). That should give investors a hint as to how long the company thinks it will take to consider all the aspects of operations and when the new business will be running at an optimal level.

CEO Irwin Simon said that now that the deal is done, "our focus now turns to execution on our highest return priorities including business integration and accelerating our global growth strategy." The international cannabis market didn't represent a huge segment of the old Tilray's business. International medical marijuana sales last year totaled $33.9 million, and accounted for 16% of its gross revenue.

Aphria, however, was more dependent on sales outside of Canada for its growth. Its CC Pharma subsidiary in Germany drives nearly all of the company's distribution revenue. In the six-month period ending Feb. 28, distribution revenue totaled CA$178.8 million. That is 57% of the CA$314.2 million in net revenue it generated over that time frame.

Tilray hinted that perhaps once coronavirus restrictions ease, particularly in Canada and Germany, big moves may be on the way. In the press release announcing the deal's completion, Simon stated that the company "is poised to strike and transform the industry." That, combined with the focus on accelerating growth, suggests that there could be some wheeling and dealing in the new company's not-too-distant future. Expansion beyond just Canada looks inevitable too -- research company Brightfield group anticipates that the Canadian market will peak at approximately CA$8.6 billion by 2026. And while that is close to double the CA$4.6 billion analysts expect the market to be worth this year, the growth rate by the end of the forecast period will be less than 4%.

Beverages are another area of interest for investors

In November 2020, Aphria announced the acquisition of SweetWater Brewing Company. The move gave the business a presence in the U.S. market, potentially setting it up to sell cannabis-infused beverages there once it is legal to do so. A few years earlier, in 2018, Tilray partnered with Anheuser-Busch InBev to create cannabis beverages for the Canadian market. Together they have a joint venture called Fluent Beverage.

The global cannabis beverage sector is promising. GrandView Research projects it will be worth $2.8 billion in 2025 and grow at a compound annual growth rate of 17.8% until then, largely due to the opportunities in North America. This is still a young segment, and Fluent only launched its first CBD-infused beverage in Canada in December 2019.

However, with both companies showing interest in this segment of the market, there is lots of potential here, especially as they combine knowledge and capabilities.

Is the new Tilray a buy?

Analysts are bullish on the merger between Aphria and Tilray, with Owen Bennett from Jefferies setting a price target of $23 on the stock. Given its price of $15 to start the week, that would put its potential returns at more than 50%. However, investors should note that the analysis takes into account the U.S. market, which is anything but a certainty right now.

Although more and more states are legalizing marijuana, a Canadian-based company like Tilray needs federal legalization before it can enter the U.S. market. The SweetWater beverages that the company now has in its portfolio use hemp to merely emulate cannabis strains. And so while Tilray is certainly well-equipped to penetrate the U.S. once the path is clear (legally), that doesn't mean it will happen just yet.

Given the volatility in the marijuana sector, I would hold off on buying shares of Tilray right now. Over the long term, its prospects look great -- but as the two businesses integrate over the next 18 months, there could be some short-term pain and disappointing results along the way that could send its shares lower.