Please ensure Javascript is enabled for purposes of website accessibility
Log In Help Join The Motley Fool
Free Article Join Over 1 Million Premium Members And Get More In-Depth Stock Guidance and Research
By Sushree Mohanty - May 7, 2021 at 9:08AM

A huge spike in marijuana sales has brought these three pot stocks into the limelight.

The coronavirus pandemic that wreaked havoc on most sectors globally has spared the marijuana industry. Cannabis sales spiked amid the pandemic, especially during the lockdown when the drug was listed under essential services. Sales even surged last year in Canada, where revenue has been dampened in prior years due to a lack of legal stores.

The story was even better in the U.S, where legal cannabis sales in the U.S. grew 46% year over year to $17.5 billion in 2020. While the drug remains illegal on a federal level, state-by-state legalization is ramping up.

Both Canadian and U.S. marijuana stocks did exceptionally well last year. But there are three that have caught my attention with their remarkable performance and growth strategies in 2020. I believe these three pot companies have the potential to help investors earn some exciting returns over the next decade. 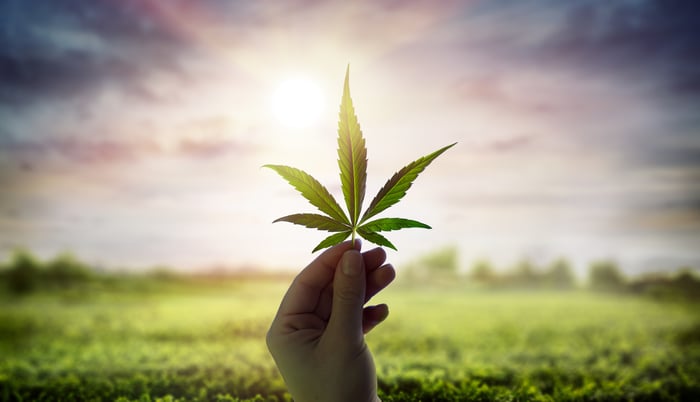 In December 2020, two Canada-based cannabis companies, Tilray (TLRY) and Aphria (APHA), signed an agreement to merge and form the largest cannabis company in the world in terms of pro forma revenue. The new entity will function under the Tilray name, with Aphria shareholders holding 62% of the new company. On April 15, shareholders of both companies voted in favor of the deal, originally set to close by the second quarter of 2021.

Tilray has yet to make it big in the cannabis space mainly because its sole focus is on medical cannabis. However, this merger deal has put it on the map and should allow it to grow further. In its recent Q4 2020, revenue was up by 20.5% year over year to $56.6 million. It also recorded positive adjusted earnings before income, tax, depreciation, and amortization (EBITDA) of $2.2 million, versus a loss of $35.3 million in the year-ago period.

Tilray is already strong in the medical cannabis market in Canada. With its existing Portuguese facility plus some new financial support from Aphria, it now has an upper hand in expanding in Europe as well. The European cannabis market could grow at a compound annual growth rate (CAGR) of 29.6% through 2027 to reach $37 billion, and Tilray's management believes this facility could cultivate roughly 40 metric tons of dried cannabis per year, giving the company a competitive edge in the EU and Israeli medical cannabis market.

A merger this big could take awhile to show its full potential. But a bigger company with access to combined capital and resources -- such as innovative products, high-class production facilities, wise growth strategies, and scale of operations -- will bear fruit over a decade.

After strengthening its position in its home state, Florida-based Trulieve Cannabis (TCNNF -0.08%) is slowly emerging as a strong contender in the U.S. cannabis space. The impressive thing about Trulieve is that it is already profitable, which is a rare attribute for a pot company. Its high revenue growth and consistent EBITDA made this possible.

After dominating the medical pot market, the company is set to do the same with recreational cannabis when Florida legalizes it (though this currently appears unlikely through at least 2022). The company is applying the same strategy in Pennsylvania, working to take over the medical cannabis market first before the state legalizes recreational pot (which, as in Florida, could take awhile). On April 5, Trulieve acquired three fully operating medical dispensaries under the name Keystone Shops in Pennsylvania, bringing its total retail stores to 83 nationally.

Massachusetts-based Curaleaf Holdings' (CURLF 1.97%) success is evident from its consistent revenue growth and positive EBITDA, which it demonstrated with a stable balance sheet throughout every quarter of 2020. In its fourth quarter, which ended Dec. 31, adjusted EBITDA came in at $54 million, versus $14 million in Q4 2019, while revenue jumped 205% year over year to $230 million. With aggressive growth strategies and carefully planned acquisitions, Curaleaf has positioned itself strongly in the U.S. cannabis market.

The rate of its expansion -- from 54 stores across 17 states at the start of 2020 to 104 dispensaries across 23 states by this April -- shows the company's remarkable ability to grow even amid a pandemic. It still holds 37 retail licenses to open additional stores in the U.S, and management plans to use 23 of those in 2021, strengthening its footing across the nation.

The company is also spreading its roots into the European market with its proposed acquisition of EMMAC Life Sciences Group, Europe's largest independent cannabis company. It plans to close this deal by the second quarter of 2021. Curaleaf's growing national and international footprint will help drive revenue and EBITDA growth, moving it closer to profitability.

These three pot companies should be growing ever faster as legalization opportunities arise globally. Trulieve has already started making profits. Rising revenues, stable balance sheets, and consistent EBITDA will bring Tilray and Curaleaf closer to profitability, too. All these factors will put them in a favorable position to take advantage of the evolving global marijuana market.

The U.S. legal cannabis market could grow at a compounded annual growth rate of 21% to reach more than $41 billion by 2025. Note that this estimate is just for places where marijuana is legal now -- it doesn't include all the states that may also legalize cannabis by then, with a strong probability of federal legalization, too. In that case, the number could be higher, which will provide ample expansion opportunities for these three.

Rather than putting all your eggs in one basket, my advice would be to have a small stake in each of these three pot stocks with the potential to bring in higher returns over the next decade.