Shares of CSX (NASDAQ:CSX) rallied 14.1% in the month of November, according to data provided by S&P Global Market Intelligence. While positive developments around a coronavirus vaccine triggered buying activity in transportation stocks, including airlines and railroads, the stamp of approval from a leading bank's research arm further fueled investor optimism in CSX stock.

After bearing the brunt of a slowdown in freight activity because of the coronavirus disease 2019 (COVID-19) shutdowns, CSX impressed investors with its third-quarter numbers released in late October.

Despite an 11% drop in year-over-year revenue, CSX's operating ratio remained intact at 56.9%. That's a remarkable feat, reflecting the company's aggressive efforts to curtail costs during a challenging time. Operating ratio is a key railroad metric that measures a company's operating expenses as a percentage of its revenue. The lower the ratio, the better. 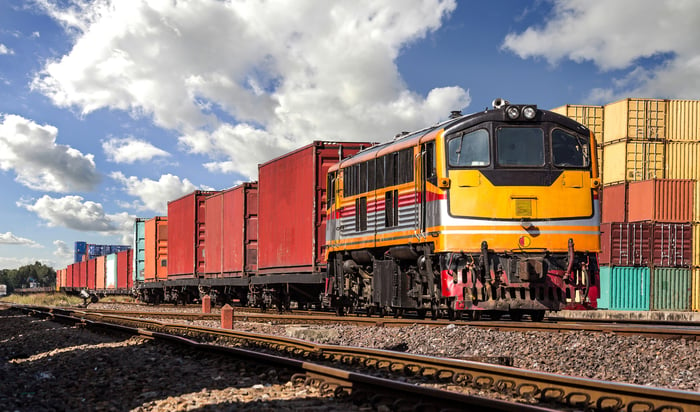 Around the same time, Credit Suisse named CSX as its "top rail pick" based on the company's success with precision scheduled railroading (PSR). PSR is a service model aimed at maximizing asset efficiency. CSX kicked off its PSR program in 2017 and has displayed a remarkable improvement in its operating ratio since.

On Nov. 30, CSX also announced it is acquiring New England's Pan Am Railways to expand its reach in "Connecticut, New York, and Massachusetts while adding Vermont, New Hampshire, and Maine to its existing 23-state network."

Railroads keep the economy moving, so it's not uncommon for stocks like CSX to rally when the economy recovers or is in expansion mode. To CSX's credit, its operating ratio in Q3 stood out to reflect management efficiency. If the company can continue to maintain a low ratio, CSX shares could be headed for a strong 2021.