The Dow Jones Industrial Average (DJINDICES:^DJI) has fully recovered from the plunge it suffered in March when the COVID-19 pandemic began in earnest. The Dow recently topped 30,000 for the first time ever, helped along by positive vaccine news. That record came despite rising cases of COVID-19 and new lockdown measures in some states.

Not all Dow components have performed as well as the index itself. Shares of Intel (NASDAQ:INTC), International Business Machines (NYSE:IBM), and Cisco Systems (NASDAQ:CSCO) are all down this year, and all three trade at a steep discount to the market. With many stocks historically expensive after surging over the past few months, it may be time to jump aboard these cheap Dow stocks. 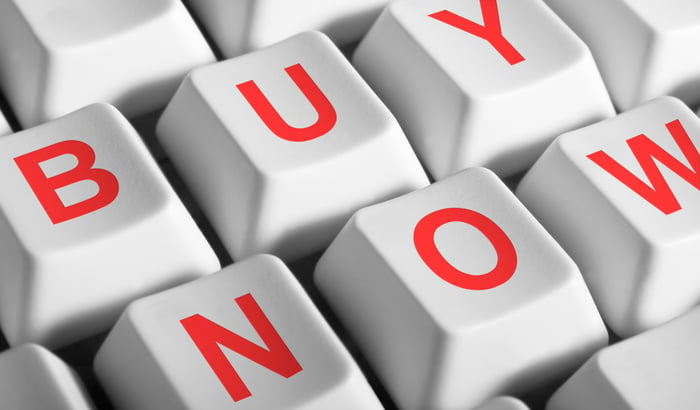 Admittedly, chip-giant Intel is dealing with some major problems. For years, Intel was the overwhelming market leader in both the PC and server-chips markets. From around 2011 through 2017, rival Advanced Micro Devices wasn't even a factor. And in both markets, chips based on the x86 instruction set, only available to Intel and AMD, have long been the standard.

Things have now changed. AMD has been churning out great products for the past few years, with its latest Ryzen PC chips beating Intel chips pretty much across the board and its EPYC server chips gaining market share. Apple is officially moving away from Intel chips for its Mac computers, announcing the first models powered by custom chips based on the ARM instruction set. And graphics chip company NVIDIA is in the process of acquiring ARM Holdings, likely with plans to make a big push for ARM CPUs in the data center.

As all of this is happening, Intel continues to struggle with manufacturing. The company's 10nm process was repeatedly delayed, and the company disclosed earlier this year that its upcoming 7nm process had been pushed back, as well. Meanwhile, other chip companies are outsourcing manufacturing to third-party foundries that aren't having the same issues.

While this seems like a lot of reasons to not buy Intel stock, value investors shouldn't be deterred. The best time to buy a stock is often when sentiment has completely turned against it. That's what's happening with Intel right now.

Intel currently trades at a price-to-earnings (P/E) ratio below 10, a historically low level for the chipmaker. Yes, earnings could take a hit as the company grapples with increased competition. However, the S&P 500 trades for a whopping 37 times earnings, so Intel stock is very cheap relative to the market.

The company won't be down-and-out forever. Manufacturing remains a problem that needs to be fixed, but Intel has signaled that it's open to turning to third-party foundries for some products. And the company is breaking into new markets while abandoning lines of business that don't make much sense: Intel recently launched its first discrete graphics chips in decades and agreed to sell its commodity NAND memory chip business.

Intel's turnaround will take time and require patience from investors. Profits could decline as competition eats away at the company's market share. But with such a pessimistic valuation, Intel stock looks like a bargain.

Another tech giant dealing with its fair share of issues is IBM. The company has been transforming itself for years, increasing its focus on cloud computing, artificial intelligence, and other growth areas while dialing back its dependence on legacy businesses. The cloud business is big, with $24.4 billion of revenue over the past 12 months, but consistent revenue growth has been a challenge.

IBM recently doubled down and then tripled down on cloud computing, specifically hybrid cloud computing. Last year, the company paid a whopping $34 billion for Red Hat, the software company behind the popular enterprise Linux operating system and  OpenShift container application platform. This year, IBM announced the planned spinoff of the managed infrastructure-services business, a move that will allow the company to pour more resources into growth businesses like hybrid cloud computing. The spinoff will also remove a slow-growth business with about $19 billion of annual revenue, which should make returning to sustainable revenue growth easier.

IBM has all the ingredients to once again become a company that can deliver for investors, something it's failed to do for years. And because the stock has been a perennial loser, down more than 40% from its 10-year high and down more than 7% this year, a successful comeback could drive huge gains for investors. Profits are depressed right now due to the pandemic, but the stock still trades for just 14 times earnings.

Investing in IBM has looked foolish for a long time. If the company can execute on its plan, that won't be the case forever.

Networking-hardware giant Cisco looks like the most troubled of these Dow tech companies. Sales were down 9% in the most recent quarter as Cisco's customers pulled back on spending amid the pandemic. Sales had also declined by 9% in the prior quarter.

But Cisco's core business of selling switching and routing hardware to large companies and organizations is prone to cycles, so the current downturn is nothing new. During times of economic uncertainty, Cisco's large customers tend to delay spending. While the current cycle is more extreme than usual, thanks to the pandemic, it will likely play out in the same way as previous cycles. Sales drop as customers pull back; then they rebound as those customers play catch-up. 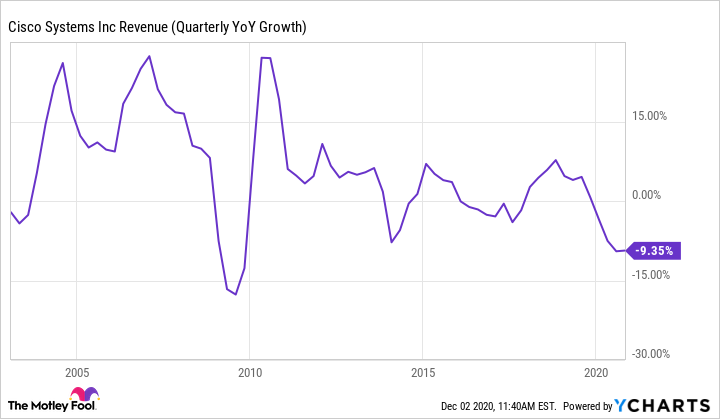 Cisco is the most expensive stock of the bunch, trading for just under 18 times earnings, but it's also the least troubled despite its recent performance. The company has remained dominant in its core markets over the years despite low-cost competition and the rise of cloud computing. Cisco controlled 57% of the Ethernet switch market, 65% of the enterprise router market, and 35% of the service provider router market in the first quarter of this year, according to Synergy Research Group.

For those looking for a lower-risk option than Intel or IBM, Cisco is good choice.