Please ensure Javascript is enabled for purposes of website accessibility
Free Article Join Over 1 Million Premium Members And Get More In-Depth Stock Guidance and Research
By Keith Speights - Dec 8, 2020 at 6:05AM

One of the biggest milestones in the history of the cannabis industry was achieved last Friday. The U.S. House of Representatives voted overwhelmingly in support of a bill that would decriminalize marijuana at the federal level. This legislation would remove marijuana from the list of controlled substances and allow individual states to enforce their own laws related to cannabis.

Now that such a momentous moment has arrived, many investors are no doubt on the hunt for great stock picks. I think that there's one marijuana stock to buy after the historic House vote to decriminalize marijuana. That stock is Innovative Industrial Properties ( IIPR -2.55% ). 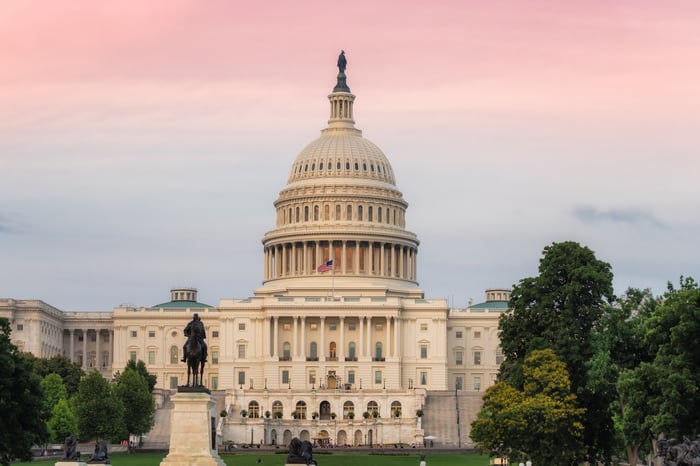 Before I explain why I like IIP so much, allow me to first provide some context about the recent House vote. It is without question a historic and significant step for supporters of marijuana legalization. It's also almost certainly a hollow victory.

The next step for the bill passed by the House is to go to the Senate. Pretty much everyone on Capitol Hill expects the legislation to be dead on arrival.

For one thing, Senate Majority Leader Mitch McConnell personally decides which bills come before the Senate for a vote. Sen. McConnell ridiculed the legislation, stating that "the House of Representatives is spending this week on pressing issues like marijuana. You know, serious and important legislation befitting this national crisis."

McConnell's remarks highlight the other problem for the marijuana decriminalization bill -- its timing. Democrats and Republicans in the U.S. Congress are attempting to reach a compromise on additional legislation to help Americans and small businesses who have been hurt financially by the ongoing COVID-19 pandemic. Even some senators who might be in favor of decriminalizing pot could be under pressure to hold back support right now because of more pressing priorities.

Benefiting from the status quo

Innovative Industrial Properties is the best pick among marijuana stocks in my opinion because it benefits from the status quo. How? We have to understand IIP's business model.

Leading U.S. cannabis operators like Cresco Labs and Green Thumb Industries can't list their shares on major U.S. stock exchanges because producing and selling marijuana remains illegal at the federal level. These companies, both of which are IIP's tenants, would benefit from federal marijuana decriminalization because it would likely clear the way for them to list their shares on the Nasdaq or New York Stock Exchange (NYSE).

That's not an issue for Innovative Industrial Properties. Its stock already trades on the NYSE with no problems because, unlike its tenants, the company doesn't actually handle marijuana at all.

Federal decriminalization of pot would increase the chances that other companies would enter the cannabis real estate market. It would also probably ease the path for financial reform legislation that would make it easier for cannabis operators to access financial services, including bank loans.

Both of these developments would increase competition for IIP. However, with the Senate practically guaranteed to block the marijuana decriminalization bill passed by the House, IIP is one of the very few obvious winners in the cannabis industry.

Of course, just because IIP wins more than others from a legislative logjam doesn't automatically make it a stock to buy right now. There are other reasons that do make it a great pick, though.

IIP's revenue continues to skyrocket, nearly tripling year over year in the third quarter of 2020. While many U.S. cannabis operators aren't quite profitable yet, IIP is: Its earnings more than tripled in Q3. The company has a clear path to keeping up its tremendous growth by adding more properties. As icing on the cake, IIP offers a fantastic dividend that's growing fast and currently yields over 3%.

But what if the day comes in the not-too-distant future where marijuana is truly decriminalized at the federal level in the U.S.? While IIP could face increased competition, its market would also almost certainly expand significantly. My take is that this stock will be a winner with the status quo and a winner if things change.