Biotech stocks have been on fire for much of 2020. Indeed, the industry benchmark, iShares NASDAQ Biotechnology ETF (NASDAQ:IBB), is up more than 27% year to date. That's far better than the S&P 500's 14% return over the same period. There are also many companies within the ETF that are outperforming both benchmarks.

When it comes to this industry, valuation and revenue growth are critical. One needs to carefully balance the two and be careful not to pay too high a price even for the companies with most promising drug pipelines. Today, let's look at how two stocks, Regeneron Pharmaceuticals (NASDAQ:REGN) and Gilead Sciences (NASDAQ:GILD), meet these criteria and why they are among the best biotechs to buy in December. 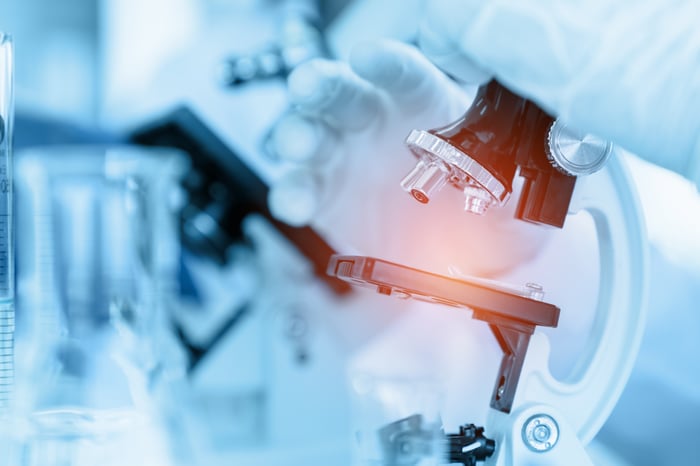 To say that Regeneron is an innovative biotech would be an understatement. In the third quarter of 2020, the company's sales and earnings per share (EPS) increased by 32% and 25% year over year, to $2.29 billion and $8.36, respectively. What's more, nearly all of its growth momentum came from just three drugs and their U.S. sales (Regeneron partially licensed their non-U.S. revenue to development partners).

First up is Eylea, Regeneron's drug that is used to treat retinal diseases. The company sold more than $1.32 billion worth of the treatment in the U.S. during the quarter, up 11% year over year.

Next up is Dupixent, an anti-allergy drug that surpassed more than $1 billion in quarterly worldwide revenue for the first time, an astonishing increase of 69% year over year. Regeneron is currently trying to expand the drug's label into combating eight more diseases, which would potentially increase the addressable market of patients to 4 million, from about 3 million today.

Lastly, sales of the company's anti-PD-1/PD-L1 immunotherapy Libtayo more than doubled from $48 million in Q3 2019 to $97 million. Immunotherapeutics involve stimulating the body's immune system to combat diseases including cancer. Libtayo does this by hindering the function of PD-1/PD-L1 proteins found on the surface of T-cells that inhibit the cells' ability to fight cancer cells. Not only is the biologic already a leading treatment in a type of carcinoma, but Regeron will expand its label to treat other cancers as well.

Libtayo is pending approval by the U.S. Food and Drug Administration as a treatment for basal cell carcinoma and non-small cell lung carcinoma. The agency could approve the drug for commercialization sometime in 2021.

Those are potentially tremendous treatment opportunities for Libtayo. Overall, the PDL1 immunotherapy market is worth greater than $21 billion globally and is growing at 42% year over year.

If that wasn't enough, Regeneron also has eight new therapeutic candidates in clinical trials. All things considered, the company is also trading at a reasonable price for its growth, with a valuation of six times sales and 17 times earnings. For biotech investors who do not wish to pay too high a price for momentum stocks, I'd highly recommend Regeneron.

Gilead is becoming one of the fastest-growing large-cap biotechs this year thanks to remdesivir, the first FDA-approved treatment for COVID-19. In Q3 2020, the drug brought in well over $873 million in sales, which is substantial considering it only received regulatory clearance in Q2 2020. The company's overall revenue in the quarter increased by about 18% year over year to $6.493 billion.

Aside from remdesivir, Gilead's core HIV segment has also been performing well. Its flagship treatment for HIV, Biktarvy, is now the top prescribed treatment for the condition in the U.S., parts of the E.U., and other regions. Gilead estimates that approximately 50% of people with HIV in the U.S. are taking Biktarvy.

This year, Gilead has also been flexing its muscles via acquisitions of smaller biotech companies to diversify its pipeline and increase its revenue stream. As an example, the company has acquired Immunomedics in a $21 billion deal for access to its breast cancer drug Trodelvy. Next, Gilead took over German biotech MYR GmbH and its treatment of chronic hepatitis delta virus for 1.15 billion euros. So far, they have been very good for Gilead's bottom line, with its quarterly EPS increasing to $2.11, a 29% growth from the same period last year.

For all its potential, Gilead is hugely undervalued. Right now, the stock trades for as little as three times revenue and nine times earnings. If that's not already cheap enough for a growth company, the stock also sports a nice annual dividend yield of 4.39%.