Emerging growth industries can be some of the most profitable in which to invest. From the rise of the internet, to electric vehicles, to cloud computing, hitching a ride with the early leaders in a new and exciting industry can lead to handsome gains.

But aside from pure innovation, another way an industry can grow from zero to very large is by going from illegal to legal! Not since Prohibition was repealed in 1933 has that happened. Now, there's a pretty good chance cannabis may be legalized in the U.S. (at least in several important respects, if not totally) at some point in the not-too-distant future. Even without full legalization, several high-probability regulatory rollbacks would be good for U.S. multistate operators.

Don't believe me? Farther below is a chart that says you should sit up and pay attention to the U.S. cannabis space. 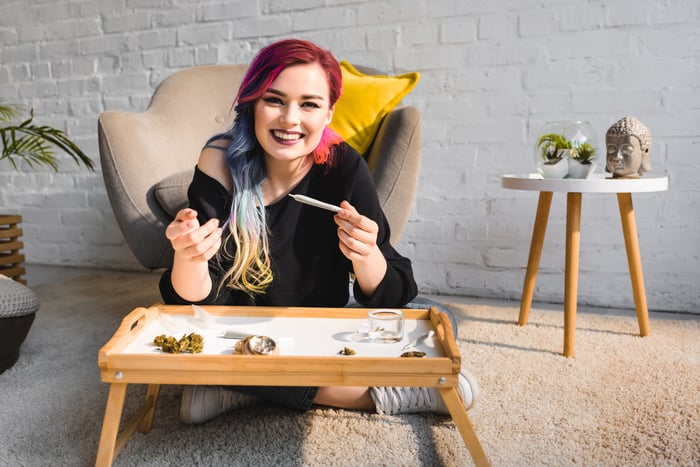 Some may be skeptical that U.S. politicians would ever legalize cannabis, but legislators also want to stay in office, and they listen intently to the will of their constituents. As such, it's pretty difficult to keep cannabis illegal for long if the following Gallup poll trend holds up:

As you can see, the last 20 years have seen a flipping of U.S. voters' opinions on legalizing cannabis, from roughly one-third of respondents favoring legalization in 2000 to over two-thirds favoring it today. It's an interesting progression, with favorability rising very fast from 1969 to 1977, before stagnating for about 20 years, and then resuming its fairly consistent climb over the next two decades.

The causes could be several, from younger generations more fully embracing legal cannabis, to more medical studies revealing therapeutic benefits for a variety of ailments, to state legalization initiatives proving to be successes. In 1996, California was the first state to approve medical marijuana, and in 2012, Colorado and Washington became the first two states to legalize recreational weed. Today, 35 states plus Washington, D.C., have some form of legal cannabis, with 15 now open to recreational adult use after recent ballot measures passing in Arizona, Montana, New Jersey, and South Dakota.

So it's likely that a younger, more tolerant generation; increasing evidence of medical benefits; and many states having legalized weed without major disasters have helped public sentiment along.

Will cannabis really be legalized by a new Congress?

Although the House of Representatives just passed the MORE Act, which would decriminalize cannabis on a federal level, it's a long shot in the Senate, which is likely to stay in Republican hands.

Nevertheless, there is other legislation that could potentially benefit current marijuana operators at the state level, and these measures are more likely to pass. That could be why these stocks have rocketed higher over the past three months. 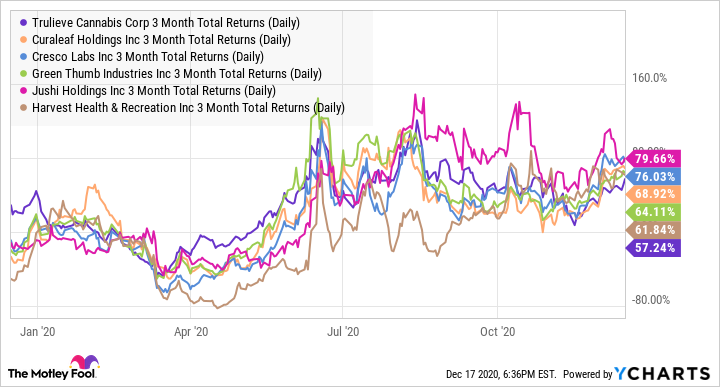 Cannabis legislation that could pass in the new administration

The most likely bill to pass is the Secure and Fair Enforcement (SAFE) Banking Act, which could come to a stand-alone vote soon. The banking bill would allow multistate and national banks to serve cannabis companies, as long as these companies comply with state laws.

That bill passed the House in 2019, but was held up in the Senate banking committee before the coronavirus hit. It's likely that, even if Republicans retain control of the Senate, Sen. Pat Toomey of Pennsylvania may take over the Senate Banking Committee from Mike Crapo of Idaho. Crapo held up the SAFE Banking Act last year after it handily passed the House with bipartisan support. But Toomey comes from Pennsylvania, a state where cannabis is medically legal, and has seen promising growth. He was recently quoted as saying, "I am open to working with my colleagues on how we could enable businesses that are operating legally in their respective states to be able to have ordinary banking services."

Recently, management for leading U.S. cannabis player Curaleaf (OTC:CURLF) said their people in Washington thought the industry was going to see the SAFE Act pass at some point soon. Curaleaf chairman Boris Jordan said that was important because it would not only remove friction in allowing consumers to transact in ways other than cash, but it would also lower the risk for cannabis companies, thereby lowering their cost of capital and letting them raise funds at lower interest rates.

Additionally, the new Congress may also consider the Strengthening the Tenth Amendment Through Entrusting States (STATES) Act. That law would allow cannabis businesses to avoid being prosecuted under the Controlled Substances Act, as long as they comply with state laws. That's important because it would allow cannabis companies to avoid having to comply with Section 280e of the tax code, which states that companies engaged in trafficking of illegal substances can't deduct expenses involved with their production and transportation.

As long as that chart holds, expect movement

While people have contemplated federal movement on cannabis for years without much movement, the recent Gallup poll shows that it's likely only a matter of time. Pro-legalization sentiment just crossed 50% during the Obama administration, but there wasn't much of a chance of repeal during the anti-cannabis Trump administration.

However, as public sentiment has continued to accelerate upward, and with a new Democratic administration about to take office and pro-cannabis ballot measures going five-for-five in November, there's a pretty good chance of something happening in the near-to-medium term. And that's good news for U.S.-based cannabis companies in 2021 and beyond.