Please ensure Javascript is enabled for purposes of website accessibility
Free Article Join Over 1 Million Premium Members And Get More In-Depth Stock Guidance and Research
By Dave Kovaleski - Dec 21, 2020 at 10:31AM

These two top investment banks are showing new energy as they enter 2021.

The end of one year or the start of another is a great time to review your portfolio. That exercise might be extra helpful in 2020. How did each company do in the past year? Were they materially changed, for better or worse, by the economy or the pandemic? Are there sectors or stocks out there that you may have overlooked that are now in a better position for long-term growth?

These are all good questions to ask. In my review, I have found several good options in the financial sector, which, for the most part, struggled more than most in 2020. But there were also some strong performers in the sector that managed to not only survive, but thrive, and remain poised for good things going forward.

For such a big name in the financial sector, Morgan Stanley ( MS -0.71% ) has flown below the radar this year, at least as far as investors are concerned. But the investment banking and asset management giant made some big moves in 2020. 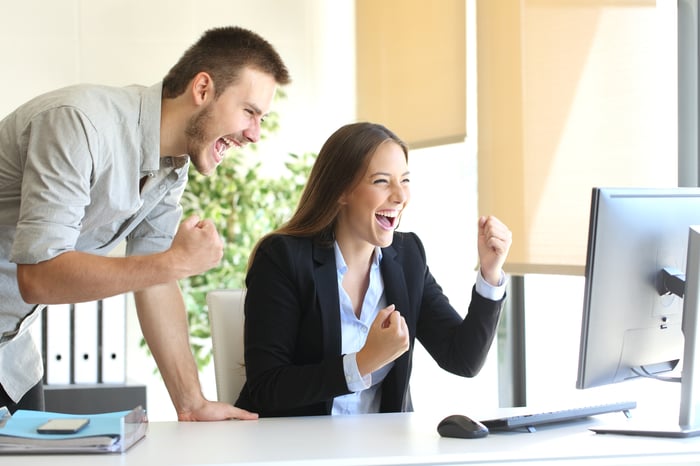 Bolstering wealth and investment management not only gives Morgan Stanley added revenue streams, but also accomplishes the firm's goal of generating a greater percentage of income from sources that are more durable and balance-sheet light. After the acquisitions are integrated, the wealth and investment management businesses will account for roughly 57% of profits, up from 26% in 2010. Further, Morgan Stanley's investment banking business, its primary source of revenue, should expect solid earnings as merger and acquisition activity is expected to pick up next year coming out of the recession.

On top of all this, Morgan Stanley has a low price-to-tangible-book-value ratio (P/TBV) at about 1.4 and a low price-to-earnings ratio (P/E) of 10.9 at Monday morning's prices, with a solid return on equity of 11.6%, a strong capital position, and a common equity tier 1 ratio of 17.3%. It all adds up to a good buy.

Goldman Sachs is a great bargain

Like Morgan Stanley, Goldman Sachs ( GS -0.73% ) has been working to diversify its revenue stream beyond its traditional investment banking roots.

Goldman's largest revenue generator is its fixed-income and equity trading business, which saw 29% year-over-year growth in the third quarter to $4.5 billion. The asset management business saw revenue jump 70% in the last quarter to $2.7 billion, while investment banking, led by a surge in underwriting, was up 7% to $1.7 billion in revenue. The consumer and wealth management business segment is its smallest with $1.5 billion in revenue, up 13% year over year. But the consumer banking portion of that arm is its fastest growing, due to the $50% revenue growth of its online bank, Marcus, which had $326 million in revenue in the quarter.

Overall, revenue was up 30.8% year over year and net income was up 94% to $3.5 billion. As one of the market leaders in both investment banking and institutional trading, Goldman benefited from higher trading activity due to the market volatility and an increase in underwriting as more businesses needed help with capital during the downturn. Also, Goldman Sachs didn't get hit with a high provision of credit losses like its competitors because its consumer banking business is much smaller. It was a strong quarter, but it largely went unnoticed by investors as the P/TBV value is 1.1, which means it's trading at roughly tangible book value. Its forward P/E is also low at 9.7.

It should also be noted that Goldman Sachs is looking to acquire a large commercial bank to build out that side of its business. The company has been linked to several banks and could well make a splash in 2021. Earlier this year it acquired a small wealth management company, Folio Financial, to build capacity there. Its market-leading position in two business segments, and its commitment to further diversifying revenue streams, should make Goldman Sachs a good investment for a long time.

It is not often that you have an opportunity to get companies like Morgan Stanley and Goldman Sachs at their current low valuations. Both companies recognize the opportunities ahead of them and are poised to go after them. It makes them stocks I'd consider buying right now.