With the market volatility we have seen in the past month, it's a good time for investors to look around for stocks that may be good values. In the financial sector, in particular, there are some good companies that are trading at low prices relative to their earnings and book value.

Goldman Sachs is one of the top investment banks in the world, with a rich history dating back more than 150 years. The company, however, has been in transition the past couple of years, diversifying from its investment banking roots to consumer banking through its digital bank Marcus, alternative investments, and other areas -- in addition to its strong trading and asset management businesses -- to broaden its revenue stream. 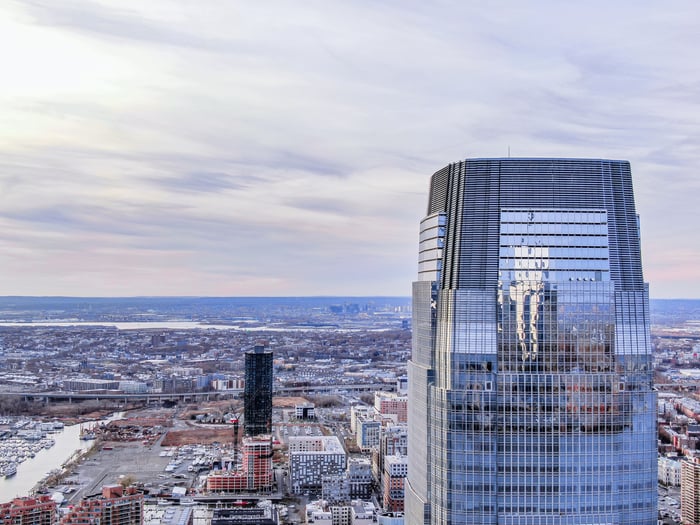 The strategy seems to be working, as the company posted strong third-quarter earnings and saw growth across the board. Net income jumped 94% year over year to $3.5 billion, or about $9.78 per share, as revenue climbed 30% to $10.8 billion year over year. The investment banking segment saw revenue jump 7% year over year to $1.9 billion, led by a 60% spike in underwriting revenue. Global markets, which is the fixed income and equity trading segment for institutional businesses, reported a 29% increase in revenue to $4.5 billion, while asset management climbed 71% to $2.7 billion. The consumer and wealth management segment, the company's smallest business at $1.5 billion in revenue, saw a 13% increase. But consumer banking, through its Marcus platform, rose 50% to $326 million.

There were several factors that drove the revenue gains, including increased mergers and acquisition activity as the company ranked first in announced M&A deals in the quarter. Underwriting was also strong, due in part to a spike in initial public offerings. In the Global markets space, revenue gains were driven by fixed income, currencies, and commodities (FICC) intermediation, while asset management was buoyed by a rise in the stock market. Finally, consumer banking revenue gained due to higher credit card balances.

A major differentiator for Goldman Sachs this year has been the fact that it hasn't been hit by high provision of credit losses like its rivals have. High provision of credit losses has dragged down other major banks, but because Goldman Sachs's consumer banking arm is much smaller, it had just a fraction of credit allowances -- just a $278 million reserve build in the quarter, which is comparable to the third quarter of 2019. In the previous quarter, it was about $1.6 billion. In contrast, JPMorgan Chase (NYSE:JPM) had a reserve build of $611 million in the third quarter after setting aside $10.5 billion the previous quarter.

But the real story here is Goldman Sachs's valuation. For a company that generated this level of earnings and posted a return on equity of 17.5% in the third quarter, it is extremely undervalued. It is currently trading below its book value with a price-to-book ratio of 0.70, which means the market doesn't recognize its value compared to its assets on the books. Its price-to-earnings ratio is about 10.5, which is low and another sign of an undervalued stock. Furthermore, it has a great liquidity, with a common equity tier 1 capital ratio of 14.5% that increased 120 basis points in the quarter.

For a company with the track record of Goldman Sachs, with market-leading positions in investment banking and institutional trading and a diversifying revenue stream, this bank stock is just too cheap right now to ignore.