Please ensure Javascript is enabled for purposes of website accessibility
Log In Help Join The Motley Fool
Free Article Join Over 1 Million Premium Members And Get More In-Depth Stock Guidance and Research
By Bram Berkowitz – May 22, 2020 at 7:00AM

PNC recently came into a large amount of cash after selling its entire stake in BlackRock, making it clear that it is looking to make a big deal.

Last week, PNC Financial Services Group (PNC -0.87%), the holding company of PNC Bank, said it would sell its entire stake in BlackRock, prompting rumors that it could soon make a big splash with an acquisition. PNC CEO and Chairman William Demchak did not deny the chatter, telling CNBC that ideally PNC would look to acquire another bank that drives the company's overall strategy of becoming a national player in both retail banking and commercial and industrial (C&I) loans.

History tells us Demchak will likely look to find a candidate trading below book value at a decent discount. In 2008, during the Great Recession, PNC acquired National City Corp. for $7 billion less than National City's tangible book value, according to The Wall Street Journal. That acquisition has proven to be a success, and Demchak has made it clear he would like to replicate it. "Look, if there was another National City less than book value that we can do ... of course, we would do it, but that's a value question," he said on an earnings call last July.

Let's take a look at how each might help PNC move forward based on C&I loans, deposits, and maybe even investment banking. 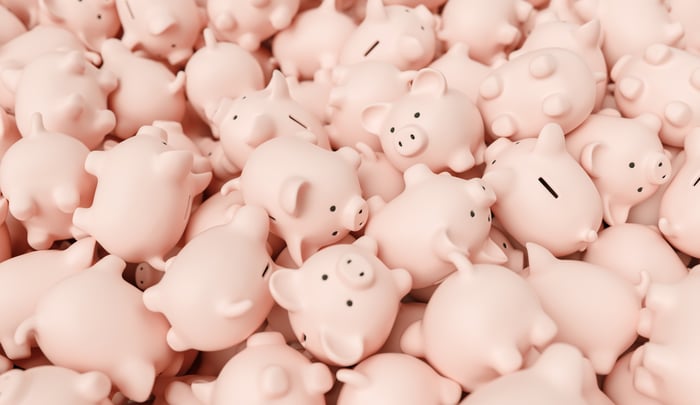 KeyCorp, which has $156 billion in assets to PNC's $412 billion, would be a big fish to land. Through Thursday's close, it traded for about 67% of book value, and it's on KBW's list of banks that may soon cut its dividend. But C&I loans make up over half of the bank's total loan book. KeyCorp also has an investment bank division that brought in $116 million in fees in the first quarter of the year, and $181 million in the fourth quarter of 2019. This division would pair nicely with PNC's capital markets team.

One thing we can also look at is how deposits might mix at two institutions. All deposit data is from the FDIC as of June 30, 2019, the most recent data available, and it shows the percentage of market share a given bank has in terms of deposits in a given state. The acquisition of KeyCorp would bring a lot of geographic diversity with it. It would launch a presence in eight new states that PNC has virtually no presence in, although some of those states are pretty far from PNC's current geographic footprint. It would also give PNC some nice tailwinds in Ohio and Indiana.

Citizens Financial, whose assets total $177 billion, is the only northeast bank on analysts' lists of potential acquisitions. The company was trading around 45% of book value at Thursday's close, and was the second-largest bank on KBW's list of dividend-cut candidates. About 38% of the bank's total loan book is composed of C&I loans, and the bank does offer merger and acquisition advisory services. Although this bank is farther east than most of the others, it does not surprise me to see it as a target, considering PNC has been eying the Boston market for quite some time. Last July, PNC executives said they were planning to launch a brick-and-mortar presence in the city -- the bank already has some employees in Boston through its subsidiaries.

As you can see below, the acquisition of Citizens would also come with a lot of good geographic diversity. PNC would instantly gain the No. 1 market share in Rhode Island and New Hampshire, and grow its No. 1 position even more in Pennsylvania. PNC would also become the No. 3 in deposit market share in the competitive Massachusetts market, and make some nice gains in Ohio, Michigan, Connecticut, and Vermont.

The $133 billion asset Regions Financial recently traded around 60% of book value. C&I loans make up about 48% of its total loan book, and the bank operates mostly in Alabama and Texas. From a deposit standpoint, the acquisition wouldn't move the needle in Texas, but it would instantly make PNC the No. 1 in market share in Alabama by a decent amount.

First National Bank of Pennsylvania, which has $35 billion in assets, recently traded around 49% of book value. Headquartered in Pittsburgh like PNC, the two management teams wouldn't need to drive far for a meet-and-greet, and there could be some tremendous cost savings in a potential deal, considering the two institutions combined had more than 600 branches in Pennsylvania as of June 2019. C&I loans made up about 23% of the total loan book, and F.N.B. also operates in Maryland, Ohio, North Carolina, and Washington, D.C.

Comerica, at roughly $76 billion in assets, recently traded around 62% of book value. Nearly 63% of the company's loan book is made up of C&I loans, and it is also on KBW's dividend cut list. The bank operates heavily in California, Texas, Michigan, and Florida, which would help PNC establish a presence in California and Texas. PNC has been planning to open branches in Houston and Dallas.

Additionally, purchasing Comerica would significantly help PNC in Michigan. In fact, based on market share as of 2019, it would give the bank the No. 1 deposit market share in Michigan. Currently, JPMorgan Chase leads with 19.63%.

A Fox Business News report recently came out hinting that Goldman Sachs might be looking for a merger as the investment bank's profits wane, and PNC is apparently on a short list. It's hard to know exactly what to make of this considering Goldman just made a small purchase itself, acquiring a boutique wealth management custodian and technology company called Folio Financial. But considering that PNC is allegedly on the short list; factoring in that M&A activity will continue to slow as the coronavirus persists; and given the impact any merger or acquisition of Goldman Sachs would have on the industry, it's hard to ignore this one.

Goldman recently traded around 79% of book value. Earnings in the first quarter of 2020 were down nearly 52% from the first quarter of 2019, and Berkshire Hathaway (BRK.A -0.06%) (BRK.B -0.95%) recently dumped most of its stake in the investment bank, even as it continued to hold most of its other bank stocks. Goldman Sachs may not be a commercial bank, but its acquisition would instantly make PNC one of the top investment banks in the world.

It's partly out of PNC's control

Goldman Sachs would be the biggest move PNC could likely make. But I also think an acquisition of KeyCorp or Citizens Bank would be game-changing as well. Both Citizens and KeyCorp would increase PNC's asset size by at least 35%, giving PNC a much larger national deposit presence. KeyCorp would also give PNC an investment bank division, albeit a much smaller one than Goldman Sachs.

However, one thing to remember is that banks are not bought, they are sold, meaning that the bank getting acquired typically needs to raise its hand if it wants a deal to happen. PNC has done its part by selling its stake in BlackRock and making it pretty clear that it is looking to shop around. Now, it will have to wait to see who answers the call.