Please ensure Javascript is enabled for purposes of website accessibility
Log In Help Join The Motley Fool
Free Article Join Over 1 Million Premium Members And Get More In-Depth Stock Guidance and Research
By Bram Berkowitz - Updated May 20, 2020 at 1:39PM

Many say the bank could be looking to make a big acquisition, similar to one it made in 2008.

PNC Financial Services Group (PNC 1.56%), the holding company of PNC Bank, grabbed headlines by announcing its intention to sell its roughly $17 billion stake in BlackRock (BLK 3.18%), the world's largest asset manager. The bank, which has $412 billion in assets, will conduct the sale of its 34.8 million common and preferred shares of BlackRock (22.4% ownership) through a registered offering and buyback. BlackRock has agreed to repurchase $1.1 billion worth of its stock from PNC upon completion of the offering.

The sale will end a storied partnership between PNC and BlackRock that began about 25 years ago when the bank bought the business from Blackstone Group's then-leader, Steve Schwarzman. The deal, which will add plenty of cash to PNC's coffers, occurs at an uncertain time, as banks are bracing for loan losses due to the coronavirus pandemic. The question is, what is PNC's plan for its new pile of cash? Is it adding to its rainy day fund or thinking more opportunistically? 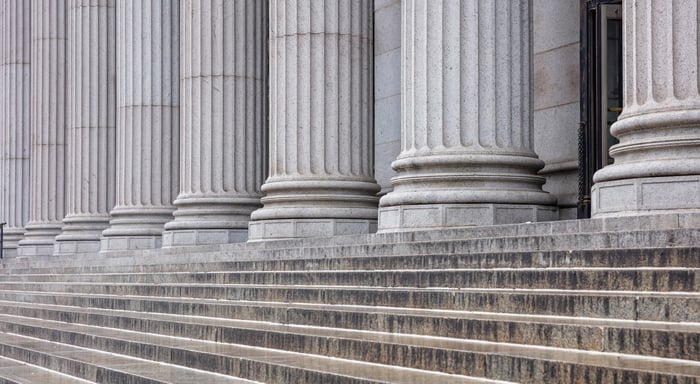 Most see the move as opportunistic

If the words of bank executives and analysts are to be believed, then it would appear the bank is gearing up for a big move, perhaps an acquisition.

"As good stewards of shareholder capital, we have consistently reviewed options to unlock the value of our investment," PNC Chairman and CEO William S. Demchak said in a statement. Furthermore, Demchak said: "We feel the time is now right to do just that, realizing a substantial return on our investment, significantly enhancing our already strong balance sheet and liquidity, and leaving PNC very well-positioned to take advantage of potential investment opportunities that history has shown can arise in disrupted markets."

Kyle Sanders, an analyst at Edward Jones, told Bloomberg that a move right now would be consistent with PNC's past behavior. "The sale of BlackRock shares likely signals that PNC is looking to make a sizable deal during a period of market disruption," he said.

In 2008, in the midst of the Great Recession, PNC acquired National City Corp. in a deal worth a little bit more than $5 billion. National City was among a string of banks that sold after they got into trouble with subprime mortgages and were offered little recourse by regulators. The Office of the Comptroller of the Currency told National City at the time that it would not receive any capital from the government-led bailout. PNC ended up purchasing National City for $7 billion less than National City's tangible book value, according to The Wall Street Journal.

In 2012, PNC made another big move, acquiring RBC Bank, the U.S. subsidiary of Royal Bank of Canada, for $3.45 billion, but has since only made several smaller purchases of more targeted companies in the capital markets and equipment-financing businesses.

How is PNC faring during the coronavirus pandemic?

All banks are struggling right now, as the stay-at-home and distancing measures brought on by the coronavirus pandemic have made it difficult for many borrowers to make repayments on their loans. In the first quarter of the year, PNC reported a 28% drop in its profits on an annualized basis.

The bank also recorded a $914 million credit provision, which is the cash banks set aside to cover potential loan losses. That was nearly five times the $189 million credit provision the bank took in the first quarter of 2019. PNC has about $19.3 billion of its $265 billion in total loans exposed to industries impacted by the virus, such as restaurants, retail, cruise lines, and healthcare facilities, among others. The bank has another $4.6 billion in outstanding loan balances in the oil and gas industries.

But the bank appears to be decently positioned from a liquidity standpoint. Its common equity tier 1 (CET1) capital ratio, a measure of its core capital to risk-weighted assets, ended the first quarter at 9.4%. The bank only has to maintain a 7% CET1 to avoid regulatory restrictions on capital distributions. And CFO Robert Reilly said on the bank's recent earnings call that he believes the bank could maintain its normal dividend through the year under an "extreme adverse scenario." Reilly also said the bank had approximately $140 billion of readily available liquidity from diverse sources.

Watch for an acquisition

Considering its acquisition of National City in 2008, don't be surprised if PNC makes another move, especially if some banks face severe financial stress. But even if the economic situation doesn't get that bad, the bank could still look to make an acquisition. After all, before the coronavirus hit, BB&T and SunTrust had just closed on their landmark merger at the end of 2019 to create Truist Financial (TFC 1.43%) with more than $463 billion in assets. Many believed the transaction would prompt a wave of larger regional bank mergers.