Please ensure Javascript is enabled for purposes of website accessibility
Free Article Join Over 1 Million Premium Members And Get More In-Depth Stock Guidance and Research
By Will Healy - Dec 21, 2020 at 8:49AM

Qualcomm has positioned itself as the essential 5G stock, but the market hasn't yet figured that out. Here's why.

Investors continue to seek ways to profit from the launch of fifth-generation (5G) networking services. But when it comes to benefiting from this upgrade, they might want to establish a strong connection with Qualcomm ( QCOM 4.71% ).

The semiconductor company's essential role in the 5G market should take Qualcomm stock dramatically higher in the coming years. Here are three reasons why.

1. The demand for 5G smartphone chipsets

AT&T, Verizon, and T-Mobile have spent the last few years and tens of billions of dollars developing a nationwide 5G network. 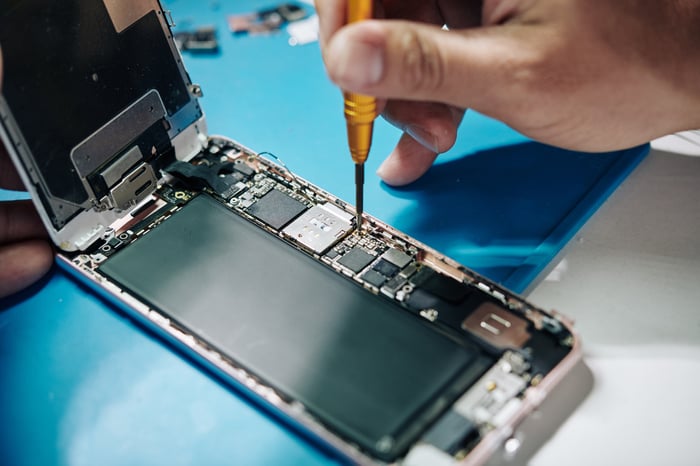 With 5G's faster speeds and lower latency, engineers expect it could easily be 10 or more times faster than the previous 4G technology.

Samsung began selling 5G phones last year. However, coming off the recent release of the Apple iPhone 12, the 5G upgrade cycle has reached a new plateau.

Hence, almost every smartphone user will probably want to upgrade to this technology at some point. Grand View Research predicts the market for smartphone chipsets will grow at a compound annual growth rate of 63%. Consequently, some expect 2021 will become a defining year for the company.

For now, smartphone manufacturers have only one company they can choose to obtain a needed 5G chipset -- Qualcomm.

Despite this situation, both the government and Qualcomm's competitors have failed to label Qualcomm a monopolist in a legal sense.

In the end, Apple's settled its lawsuits, and Qualcomm persuaded the courts to overturn a previous monopoly decision. This is because customers and even regulators want 5G chips more strongly than they wish to curtail Qualcomm's market power.

Still, although Apple settled in court, it also bought Intel's smartphone chipset business. This could someday give Qualcomm a competitor. However, unless and until that day comes, all of the benefits of 5G chipset growth will accrue to Qualcomm.

3. The valuation does not reflect the opportunity

Qualcomm's latest quarterly non-GAAP revenue rose by 35% from year-ago levels. Diluted earnings per share increased by 86% over the same period.

This is probably not a one-time number. Qualcomm also issued guidance for the first quarter of 2021. During this period, Qualcomm believes diluted EPS will reach $1.95 to $2.15 per share. Considering that Qualcomm earned a diluted EPS of $0.99 in first-quarter 2020, this would result in an approximate doubling of earnings.

This level of growth is not reflected in Qualcomm's current stock price. Despite stock price growth of almost 70% in the last 12 months, Qualcomm stock trades at a forward price-to-earnings (P/E) ratio of about 21.

Such a multiple usually reflects lower levels of profit growth than investors have experienced recently with Qualcomm. Hence, the relatively low valuation looks like a huge opportunity for investors. 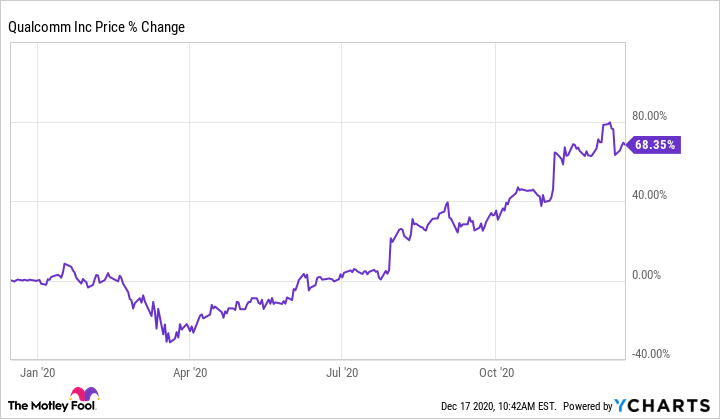 Not only is Qualcomm a buy, but it is also hard to imagine a better position for prospective buyers. Regardless of what happens with the overall economy, the world will almost certainly embrace the faster speeds of 5G.

Since only Qualcomm makes a critical 5G chipset, all of the benefits of the forecasted 63% CAGR will probably go to this chip stock. The massive earnings growth of Qualcomm reflects this.

What does not reflect the opportunity is the forward P/E ratio, which now stands barely above 20. Given the market conditions and the financials, tech stock investors should connect with this opportunity before the valuation and the Qualcomm stock price move much higher.