You don't need to have tens or hundreds of thousands of dollars to invest in the stock market. In fact, you can get your investment journey started with a far more modest amount of cash. A larger starting investment might build your portfolio faster. But the secret to successful investing isn't necessarily how much you invest, but where you invest and when.

If you have $1,000 to invest in the stock market, here are three amazing companies to build a winning portfolio around. Let's dive right in. 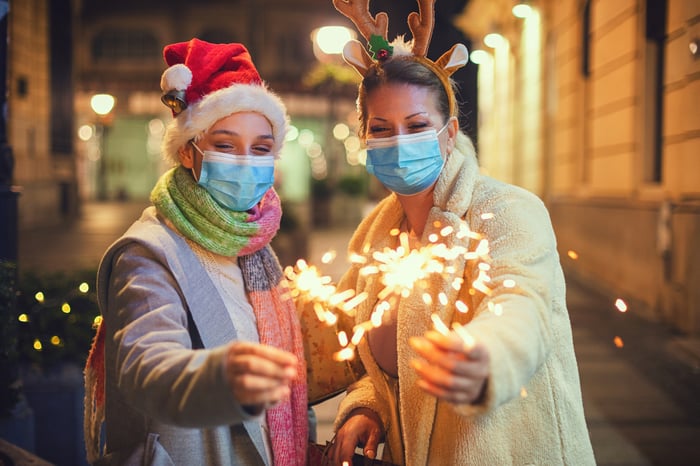 If e-commerce is the future of shopping, then Shopify (NYSE:SHOP) has already scooped up a sizable piece of that pie. Shopify is the second-largest e-commerce platform in the U.S., with a 20% market share, according to a 2020 study conducted by Oberlo. This is no small feat, given that estimates from Statista forecast that the U.S. e-commerce market will achieve a record $476.5 billion in sales by 2024.

E-commerce is one of the few sectors that has remained largely untouched by the ill fiscal winds of the coronavirus pandemic. Shopify's financial performance is a prime example of this industry's continued success despite broader market troubles. The company reported 47% year-over-year revenue growth during the first quarter. As the pandemic progressed and the number of people shopping online soared to an all-time high, Shopify's top line swelled accordingly. In the second and third quarters, the company's revenue was up 97% and 96% compared to the year-ago periods.

"More entrepreneurs are signing on to Shopify so they can quickly and easily put their ideas into action," CFO Amy Shapero stated in the company's Q3 report. "We continue to evolve our global commerce operating system to make it easier for merchants to get online and start selling, get discovered, and get their goods to buyers, while providing a delightful shopping experience."

Shopify has been able to amass significant liquidity this year. At the close of the third-quarter period, the company had $3.1 billion in cash and cash equivalents, whereas at the end of last year it had less than $700 million in cash. As for long-term liabilities, Shopify owes $915.1 million. Since the company doesn't pay a dividend, it can continue to add to its impressive cash reserves and whittle down existing debt.

Shopify's price surge has been a product of its insane popularity with investors in 2020, but the company was generating amazing returns long before the pandemic began. Looking back at the company's financial performance over the last few years, it reported 73% year-over-year revenue growth in 2017, 59% in 2018, and 47% in 2019.

Shares of Shopify come at a premium -- roughly $1,240 each and at 789 times trailing earnings. But thanks to fractional investing, you can buy Shopify without paying the price of an entire share. With analysts projecting that the company will grow its annual earnings by more than 100% over the next five years alone, it's not a stretch of the imagination that Shopify's price could rise higher, even if the market slumps again. Investing in this fantastic growth stock would be an extremely smart move as we transition into the new year.

Pfizer (NYSE:PFE) has earned lots of headlines lately, and for good reason. Investors and the world cheered on Dec. 11 when the company's COVID-19 vaccine, developed with BioNTech (NASDAQ:BNTX), became the very first coronavirus vaccine to receive emergency use authorization from the U.S Food and Drug Administration. This landmark news was preceded by the U.K.'s granting of a temporary authorization of the vaccine for emergency use on Dec. 2. and followed by the European Commission granting a conditional marketing authorization for the vaccine on Dec. 21.

The Pfizer-BioNTech vaccine, which interim data showed to be 95% effective, is still being studied in a global phase 3 trial that involves  more than 44,000 participants. Management has said that additional safety data is forthcoming, while the company is also planning studies of the vaccine on more sensitive populations, including younger children and pregnant women.

The vaccine will cost approximately $39 per treatment course, which involves a first dose followed by a second dose three weeks later. Pfizer and BioNTech already inked vaccine supply contracts with numerous countries earlier this year, including an agreement to supply 40 million vaccine doses to the U.K., up to 300 million doses to the EU, and up to 600 million doses to the U.S over the next year and beyond.

Investors should certainly expect to see a surge in Pfizer's revenues in the new year attributable to its COVID-19 vaccine, but it has much more to offer beyond this achievement. As one of the world's largest pharmaceutical companies, Pfizer boasts a broad portfolio of products to support future growth. Even though the company's revenue was down 8% during the first nine months of 2020 compared to the same period last year, its biopharma division grew 6% during this period.

Pfizer also recently finished merging its subsidiary Upjohn with generic drugmaker Mylan, the product being a brand new company called Viatris (NASDAQ:VTRS). Management previously stated that the goal of the new combined company would be to "drive a sustainable, diverse and differentiated portfolio of prescription medicines, complex generics, over-the-counter products and biosimilars." Viatris should be a major game-changer for Pfizer's revenue over the next few years. That, combined with Pfizer's existing portfolio (which now includes its COVID-19 vaccine) and broad pipeline featuring 92 products, can help the company recover from any short-term hit it's taken due to the pandemic.

There's one final reason to draw investors to Pfizer, and that's its robust dividend. With a yield of approximately 4.2%, the company's dividend is well-above that of the average stock on the S&P 500. Pfizer isn't a company to pick for fast growth, but if it's long-term value and dividends you're seeking, this stock should be on your buy list.

PayPal's (NASDAQ:PYPL) business model as an online payments system is ideal for sustainable growth in the pandemic era and beyond. The company's upside potential was equally evident prior to this year's market storm. PayPal grew its revenues 15% last year, and the company reported 18% year-over-year revenue growth in 2018.

PayPal has continued to impress investors in each of the three quarters it's reported in 2020. The company marked double-digit net revenue growth in each of those quarters compared to the year-ago periods -- 13% in the first quarter and 25% in the two subsequent quarters. The third quarter in particular was one of record growth for PayPal, in which it reported its revenue and total payment volume increased at the highest rate in the company's history. At last count, the company had 361 million active accounts on its platform, with 4 billion transactions taking place on PayPal during the third quarter alone.

PayPal is also in a great position in terms of its debt-to-cash ratio. The company has roughly $18 billion in cash and cash equivalents, as opposed to a far lesser $9 billion in debt. Management expects the company's full-year 2020 revenue to grow between 20% and 21% from last year. Analysts also project that the company will continue to achieve this approximate level of earnings growth each year over the upcoming five-year period. If you're on the hunt for a winning growth stock that won't expose you to too much risk, PayPal certainly makes the cut for a well-rounded long-term investment portfolio.