Investors are still excited about these strong performers.

Stocks continued to do well as Wall Street began the last week of 2020, with the market pushing further into record territory in mid-afternoon trading Monday, and the Nasdaq Composite ( ^IXIC -0.27% ) up by nearly 1% shortly after 2 p.m. EST. 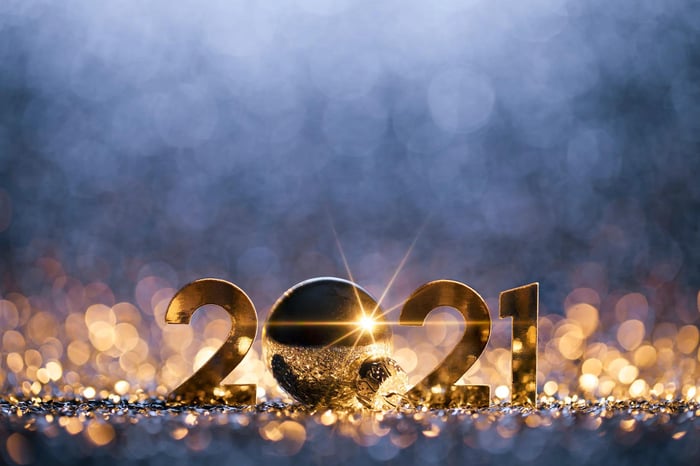 To be clear, the year-to-date gains for the FAANG stocks are impressive. Apple is leading the way, up by more than 85%, but Amazon and Netflix aren't too far behind. Even the lagging Facebook and Alphabet have managed to gain more than 30%, though those results fall short of the Nasdaq Composite's 44% rise year to date. 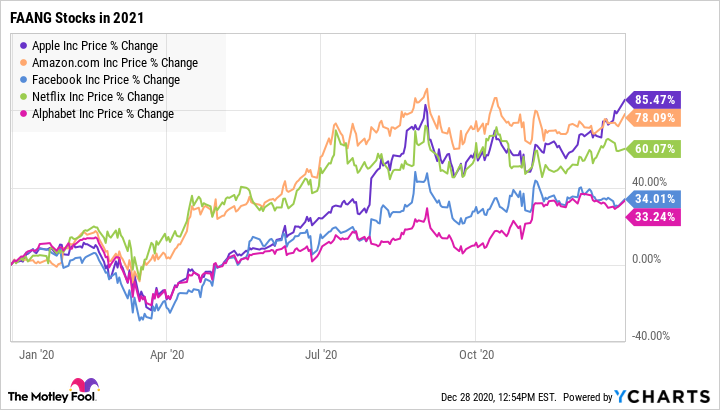 All five of these stocks still have plenty of growth potential. Apple will have an amazing quarter due to the release of its 5G-enabled iPhone 12, for which millions of Apple fans have been waiting through several previous upgrade cycles. Moreover, news that Apple is looking to get into the electric vehicle business shows that its plans for innovation go well beyond its flagship device.

For Amazon, optionality is the name of the game. There's hardly any industry beyond the reach of the e-commerce giant, which is currently taking a look at areas like real estate, pharmacy services, and grocery delivery.

Facebook hopes that it can get itself out of congressional committee rooms and find new ways to spur its revenue growth. Even as its namesake social media service matures, Instagram remains popular, and advertising sales could bounce back once the economy recovers further from the coronavirus crisis.

Lastly, Alphabet wants to see improvement after a somewhat sluggish 2020. Ad sales slumped during the worst period of pandemic-related economic shutdowns, but that should give the tech giant room to improve in 2021. Moreover, the breadth of its business provides it with chances to excel that many investors don't even have on their radar screens yet, especially in the company's "other bets" area.

The most vulnerable of the bunch?

If there's a FAANG stock that's most likely to face big challenges in 2021, it's Netflix. The company roared to unprecedented growth in the first half of 2020, but it'll be hard for it to keep up the pace. Even in the third quarter, a big slowdown in subscriber growth made investors nervous about the video streaming company.

Moreover, Netflix faces a lot of competition. New services from rivals have gained traction quickly, and the race to acquire and produce top-notch content will require it to lay out increasing amounts of capital. It'll be interesting to see how Netflix's recent subscription price hike will play in an environment in which there are so many alternatives.

Don't count out the FAANG stocks

The FAANG companies are all so big that they simply won't be able to match the growth rates of their much smaller counterparts on a percentage basis. Yet in terms of their importance, the FAANG stocks remain vital -- and they'll play a key role in determining the direction of the Nasdaq in 2021 and beyond.

This Nasdaq Giant Is Spoiling the Meme Stock Party

Stock Markets Sink, but Will Netflix Make Wednesday Even Worse?