This is a year most everyone wants to forget, but one that will likely linger with us a long time. The wounds it created in our social lives were replicated in the marketplace as businesses were forced to close, sometimes permanently, and often with disastrous consequences.

While bankruptcies hit record levels, especially in the retail sector, there were some spectacular flameouts in biotech and energy as well.

Here in reverse order are the 10 stocks that performed the worst in 2020 (as of market close on Dec. 24) while managing to stay solvent and above penny-stock territory, except for one. 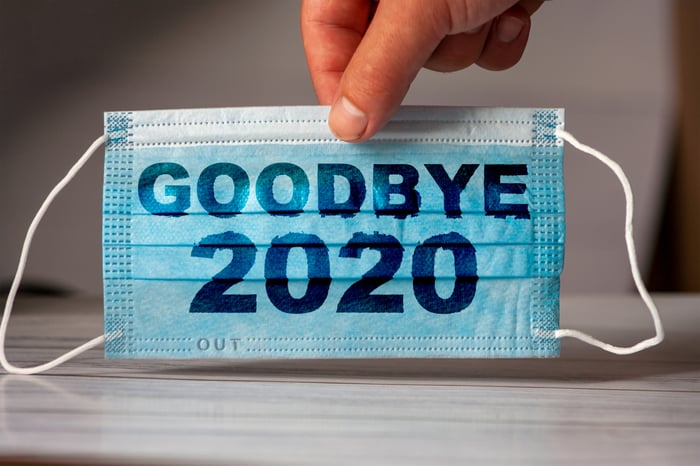 Unlike many oil and gas companies, NGL Energy Partners (NYSE:NGL) was actually able to keep rising through the first half of the year even after the master limited partnership slashed its distribution to investors. Because it was expecting to remain profitable after reducing capital expenditures, it forecast it would be able to remain free-cash-flow positive.

Yet as the year progressed and the effects of the pandemic only worsened, NGL's finances went south with it, and investors began to suspect it may not have cut spending enough. Ratings agency Moody's didn't like what it saw, either, saying it has a negative outlook on NGL because the pandemic limited its ability to refinance its debt, along with all the other problems the crisis wrought in the energy sector.

Irish biotech Amarin (NASDAQ:AMRN) was pummeled back in March after a trial judge in Nevada invalidated several of the patents surrounding Vascepa, a modified fish oil treatment that lowers triglycerides. The judge called the company's intellectual property "obvious" and nullified the patent, virtually wiping out Amarin's business in the U.S.

It regained a little of the ground it lost over the summer as it appealed the ruling, but got slammed again in September when it lost the case. Its stock limps along now at around $5 per share.

Washington Prime Group (NYSE:WPG) is another REIT wrecked by the pandemic, but unlike Invesco, Washington Prime operates shopping malls, which became ghost towns when retailers were forced to close.

Malls were already suffering from declining traffic, and the lockdowns sealed the fate of some. Both CBL & Associates and Pennsylvania REIT ended up in bankruptcy.

Washington Prime's problem is that many of its malls are not in top-tier areas and could see tenants abandon its properties if traffic doesn't bounce back.

Oil and gas refiner PBF Energy (NYSE:PBF) was weakened when oil prices plummeted below $20 a barrel, which led it to suspend its dividend and announce it was selling more than a half-billion dollars' worth of assets to raise cash to survive.

While refiners tend not to reflect oil prices, since their businesses operate more on demand for energy, even low oil prices couldn't revive the travel and tourism industry. Some politicians have even tried to effectively cancel Christmas by recommending people not visit relatives for the holidays.

COVID-19 vaccines do give rise to some hope for recovery sooner rather than later, but PBF Energy's stock continues to hover around $7 a share.

Another biotech crushed this year was Intercept Pharmaceutical (NASDAQ:ICPT). It was run down when the Food and Drug Administration denied approval of its obeticholic acid (OCA) treatment for non-alcoholic steatohepatitis (NASH), or inflammation of and damage to the liver caused by a buildup of fat.

While the FDA did extend an olive branch to Intercept to try again with more data, there's a lot of competition for treating NASH, and doctors typically just recommend patients lose weight to reduce body fat.

Drug manufacturer Tricida (NASDAQ:TCDA) also saw support for its stock crumble after the FDA said its application for acceptance into the Accelerated Approval Program for veverimer, its therapy for chronic kidney disease, was flawed.

While the FDA didn't elaborate on the deficiencies, veverimer is Tricida's only drug in clinical-stage development, so the denial is crippling its ability to advance.

Real estate investment trust (REIT) Invesco Mortgage Capital (NYSE:IVR) was an early casualty of the pandemic, suffering a near-death experience earlier this year as a liquidity crisis in mortgage-back securities led it to sell securities, slash its dividend, and vow to only invest in agency loans.

Invesco is a mortgage REIT, meaning it invests in mortgage debt rather than the real estate itself, as traditional REITs do. Although most of its mortgage-backed securities were guaranteed by the government (agency debt), about a quarter was in nonagency loans. That segment's collapse caused a cascading effect that nearly took Invesco down with it.

Yet another biotech stock on the outs is NextCure (NASDAQ:NXTC), which hasn't had a good 2020 -- like at all. It kicked off the year with a Securities and Exchange Commission filing that revealed Eli Lilly had ended research and development collaboration, then six months later said it was ending its trials for non-small cell lung cancer and ovarian cancer for its NC318 immunomedicine therapy based on response data and enrollment.

Then NextCure's chief medical officer resigned. Shares of the biotech that had traded as high as $70 per share now waffle around $10.

Although the U.S. has become a world leader in liquified natural gas (LNG) exports thanks to Cheniere Energy, the decline in pricing has impacted the industry, and in particularly upstarts like Tellurian (NASDAQ:TELL), which wants to break into the market by developing its own export terminals and pipeline infrastructure to support it.

While it has the financial wherewithal to ride out the storm, at least for a while longer, Tellurian did also just lose its CEO. She was, however, replaced by an industry pro from Sempra Energy, which could be why Tellurian's stock has doubled from its recent lows. Yet considering how far its stock is still below where it started 2020, it shows how low it had fallen.

The worst performer on the stock market in 2020 was marijuana producer Sundial Growers (NASDAQ:SNDL). It's actually one stock that is priced at penny stock levels (it currently trades for under $0.50 per share) but still has a market valuation above $300 million.

It started the year running low on cash just a few months after its IPO and was in violation of its debt covenants. Then things started to get really bad. The pandemic struck and it had to resort to asset sales to raise money. While it has eliminated all of its debt, it has also heavily diluted shareholders in the process and may need to effect a reverse stock split to keep its Nasdaq listing.