Please ensure Javascript is enabled for purposes of website accessibility
Log In Help Join The Motley Fool
Free Article Join Over 1 Million Premium Members And Get More In-Depth Stock Guidance and Research
By Taylor Carmichael - Apr 2, 2020 at 6:07AM

Amarin's stock dropped 70% after its patent for Vascepa was invalidated by a federal judge.

On Monday, Amarin (AMRN -3.65%) investors got some horrible news. A federal judge in Nevada declared that the company's intellectual property was "obvious" and its drug patent was invalid.

This was a complete shock to many investors, including yours truly. Amarin only has one drug, and now the company has lost the rights to it in the United States. Yesterday I was saying, "This is legalized theft." 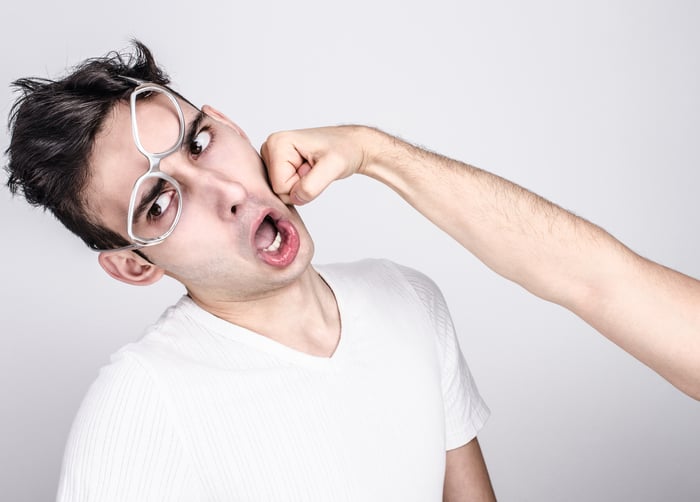 A brief history of Vascepa

The patent trial in Nevada was regarding Amarin's drug, Vascepa, a pill containing modified fish oil that reduces triglycerides, or fat in your blood. Amarin's scientific discovery was that one component of fish oil, the omega-3 fatty acid EPA, is helpful and good. The other major component of fish oil, DHA, is unhelpful and might even be bad for you. So Amarin removed DHA from fish oil, and created a purified version of EPA. That's Vascepa, and it's been approved since 2012 as a drug to reduce triglycerides.

Management believes that when you have high triglycerides, it's vital for your cardiac health to reduce them, and they wanted to market Vascepa in that manner. The U.S. Food and Drug Administration (FDA) said no way, that was pure speculation, the company would need to prove it. So Amarin enrolled 8,179 patients in a major five-year study, the Reduce-It trial.

The results were astounding. In people with high triglycerides (which includes roughly one-fourth of adult Americans), Vascepa reduced heart attacks by 31%, strokes by 28%, and cardiovascular death by 20%. Dr. Deepak Bhatt, professor of medicine at Harvard University, was the author of the study, and even he was surprised. "We might be at the dawn of a new scientific era," he said. Given all this, how is any of Amarin's IP "obvious"?

In fact, it's not at all obvious that one half of a fish-oil pill would reduce major adverse cardiac events in people with high triglycerides. The results of Amarin's Reduce-It study shocked doctors around the world.

After all this work and effort, to have an unelected judge seize Amarin's pill and give it to a couple of companies that have done none of the scientific research rather boggles the mind.

What will happen next?

One thing is obvious -- the company is appealing the decision.

So far, the FDA has not approved an abbreviated new drug application (ANDA), which is what a generic company would need before marketing concentrated EPA to the public. That's probably why the stocks of Hikma Pharmaceuticals (HKMP.Y -0.61%) (HKMP.F 2.30%) and Dr. Reddy's Laboratories (RDY -0.65%) aren't skyrocketing right now; Hikma is up 3.4% year-to-date and Dr. Reddy's is down 2.6%. Meanwhile, Amarin lost 70% of its market capitalization in a day.

How much those two makers of generic pharmaceuticals will profit from the invalidation of Amarin's patent is yet to be seen. Unlike the vast majority of drugs that go off-patent, Vascepa has had no real opportunity to prove itself in the marketplace. Doctors still have to be educated about the importance of lowering triglycerides, and about what this amazing study found.

Amarin is not just appealing the decision; the company is also seeking a preliminary injunction that would prevent the launch of generic versions of Vascepa until its appeal is heard. CEO John Thero said, "We believe we are favorably situated to obtain an injunction against generic launch pending appeal, subject to our posting a bond to secure generics' lost profits in the event that generics prevail on appeal."

Also, this ruling only applies in the United States. Amarin's patent rights remain valid in the rest of the world.

In the animated classic Alice in Wonderland, the White Rabbit said: "Don't just do something, stand there." That's wonderful counterintuitive advice. In a physical emergency, you might need to run and shout and wave your arms around; sometimes speed is essential. But when you're investing your money in a business, you should take your sweet time. That includes buying as well as selling. There is no rush.

In Amarin's case, the key is what will happen in the future. Of course, a monkey wrench has been thrown into the company's plans. Yet Amarin has a lot of cash -- $645 million (almost half of the company's new market cap). Before COVID-19 struck, the company had also had very impressive revenue growth.

Nobody knows how big this market will ultimately be; estimates vary wildly. Nor is it known whether the FDA will allow the generics to claim all the cardiac health benefits that Amarin found with Vascepa; it's entirely possible that the FDA will allow generic versions of the drug, but only to reduce high triglycerides. And, finally, from the brief legal research I've done, it appears the standard of review at the court of appeals will be de novo, which means the appellate court is not bound by the trial judge's ruling.

I think for now the best course is to do nothing, and wait and see how it all plays out.