Recently, Martha Stewart, the entertainment and lifestyle icon, launched a new set of cannabis-infused oils and edibles bearing her personal brand. Rather than targeting people that need medicinal cannabis or who want a recreational product, Stewart's brand purports that marijuana has a place in your daily wellness routine. If that isn't a sign that the cannabis industry has grown far beyond its roots, nothing is.

Stewart isn't competing in the wellness market alone, however. Canopy Growth (NASDAQ:CGC) is at the start of what could be a long collaboration with Stewart. Across the U.S. and elsewhere, the company is launching a lineup of next-generation "Cannabis 2.0" products like vapes, edibles, and marijuana beverages. At the same time, it seeks to evangelize cannabis-using icons like Stewart, thereby converting skeptical new customers and reaching new demographics. But will this stock be a worthwhile investment anytime soon? 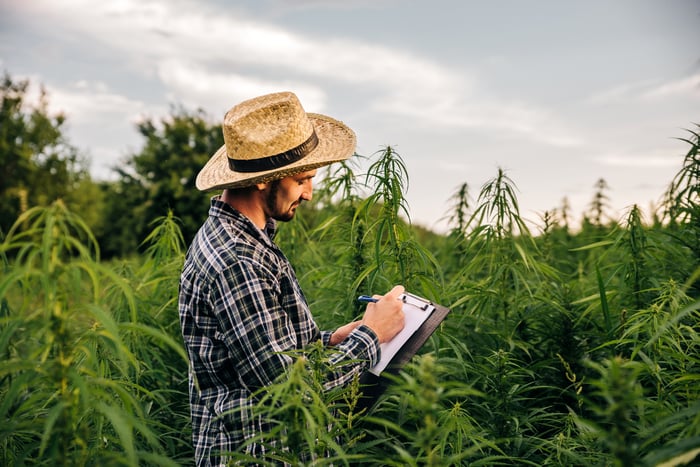 The case for Canopy

Canopy's strategy is to focus on Canadian recreational consumers, the American cannabidiol (CBD) market, and the German medicinal market. It thinks that the combined worth of these markets will be around $22 billion by 2023, which is more than large enough to safely share with several competitors. So far, its quarterly revenues are growing by 76.6% year over year, which indicates that its plan is working.

Between revenue growth and careful spending, the company's key financial metrics are continuing to improve. In the most recent quarter ending Sept. 30, its free cash flow had improved 57% compared to last year. This was made possible by reducing its workforce, spending less on research and development (R&D), and reducing production capacity. This led to selling, general, and administrative (SG&A) expenses falling by 19% year over year. The company has also taken an aggressive approach to trimming share-based compensation, which was a major driver of high operational expenditures last year.

It plans to continue making similar cuts and improvements, which will result in up to $200 million in cost savings over the next two years. Overall, potential investors should be very pleased with the progress so far, and it's a positive sign that management has set a concrete goal that it can be held accountable for meeting.

The company will doubtlessly use its partnership with Constellation Brands to distribute its products more efficiently. As a powerful competitor in the consumer packaged goods (CPG) industry, Constellation is the perfect companion for Canopy, especially as it moves further into the Cannabis 2.0 space. In particular, Canopy's Biosteel line of CBD beverages will benefit from being distributed through Constellation's retail network, which is slated to reach 100% penetration in the U.S. early next year. This will extend its leadership in the global cannabis-infused beverage market beyond its strong market share in Canada. Constellation will enable Canopy's other CBD brands to reach a wide swath of retailers too.

The case against Canopy

Despite all of these positive things, Canopy isn't profitable yet, and it might not be for the next year or beyond it. It reported a cash outflow of more than $190 million in the most recent quarter.

And its stock tumbled sharply on Dec. 9 when the company announced that it was closing a handful of its cannabis cultivation sites across Canada. These closures curbed 100% of its outdoor production footprint in the company. It's unclear whether further cuts are forthcoming, but if they are, investors should expect the market to react the same way. So long as its revenues continue to grow, however, you shouldn't think of production cuts as a large negative. New capacity can be rebuilt if it's needed to meet demand.

Canopy is making significant headway against the problems that prevented it from being profitable in the past. Its revenue growth, free cash flow, and earnings before interest, taxes, depreciation, and amortization (EBITDA) are trending in the right direction. Its target markets are growing, and management has a plan for how to gain market share.

But it still hasn't demonstrated that it can routinely make more money than it spends, and it probably won't make you a millionaire. Until the company reports several consecutive quarters of profitability, it's a risky purchase that I can't recommend. Right now, there's the start of a trend in the right direction, so keep an eye on how its cost cuts and margin improvements proceed over the next few quarters -- earnings might not be far off.