Cannabis stocks sound like a great way to make a buck. After all, marijuana is an in-demand product in an expanding multinational industry that has plenty of room to innovate, and there's no single company that has enough power to box out the other competitors from a share of the profit. Plus, we're still in the market's formational days, during which the major players will make their names and investors who choose wisely will make millions.

But for all its merits, Canopy Growth (NASDAQ:CGC) isn't the explosive grower investors crave. Even with its enviable 15.5% share of the Canadian cannabis market, its Martha Stewart CBD brand in the U.S., and an interesting knack for producing marijuana-infused beverages, the company isn't about to take shareholders to the moon. 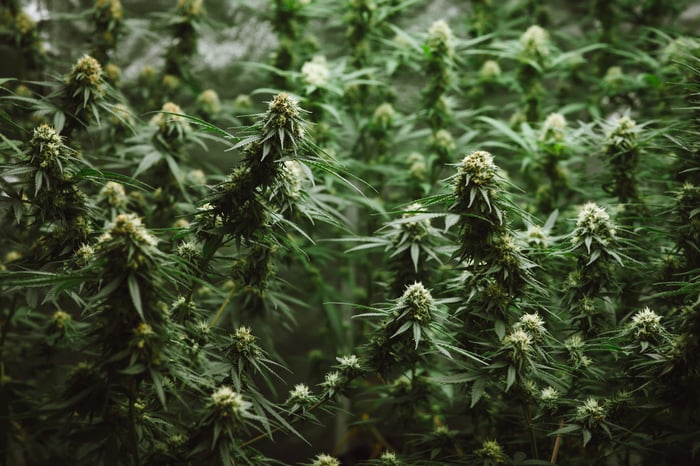 The biggest reason Canopy isn't a millionaire-maker stock is that it hasn't demonstrated the kind of revenue and earnings growth that would make that possible. Unfortunately, like many other cannabis companies, Canopy's ability to consistently turn a profit is anything but proven, and so its price hasn't exploded alongside its rising income from sales. And because marijuana is a physical product, Canopy -- unlike the millionaire-maker stocks in the tech industry -- can't increase its sales unless it spends more on cultivation facilities, manufacturing operations, marketing, and/or retail outlets. And all of that entails significant overhead. This means that a lack of profit today is a big deal because the company will have a hard time raising money for scaling up later on -- without diluting its shares or picking up new debt, at least.

Thanks to the strong performance of its high-value products, including cannabis oils and distillates, quarterly net revenue increased 77% year over year per the latest earnings report. And as a result of scaling down production capacity and excess labor, it reported a 19% drop in its selling, general, and administrative (SG&A) expenses. This contributed to its adjusted earnings before interest, taxes, depreciation, and amortization (EBITDA) increasing by 43% in the same period.

That's another piece of good news, and the growth here might look meteoric -- but there's a big catch. Even with these strongly positive figures, it still reported a loss of $85.7 million last quarter. As long as it keeps reporting losses, there's a very slim chance of any investment you make in this stock turning you into a millionaire. These losses were due in large part to significant negative changes in the fair-value of the company's financial assets, which will probably happen again in the future (even if it might not have as big of an impact). In short, the company is still losing plenty of money, even if its sales and overall efficiency have improved considerably over the course of the year.

Likewise, the company's trailing free cash flow is still deeply in the negative. Plus, its operational expenses actually increased year over year because management expected that some of its financial assets would lose money in the future, necessitating some additional savings to cover the anticipated losses. Management plans to cut up to an additional $200 million Canadian in excess spending, but that probably won't be enough to turn the tide toward profit on its own.

Could buying Canopy still make you wealthier in the long term?

Canopy's finances make it an unlikely candidate for millionaire-level growth. But the company does have a few things going for it that might lead its stock to outperform the market over the next few years. Specifically, it has a leading position in the German medicinal cannabis market, and it maintains a competitive stake in the Canadian recreational market. And if its 54% market share of the Canadian cannabis beverage market is any indication, consumers will respond favorably to these innovative recreational products as it continues expanding to the U.S. as the law permits on a state-by-state basis.

In the end, you shouldn't expect success in beverages to be sufficient to propel Canopy's stock to great heights, even when considering its cost reductions and rapidly rising revenue. While it's true that Canopy's stock will probably appreciate if it continues to report revenue growth, the company's major project is to prove that it can make more money than it spends. Until then, it's probably best to hold off on Canopy Growth unless you're willing to shoulder the risk.