Robinhood's 100 most popular stocks include quite a few that delivered sizzling performances in 2020. Investors now want to know which of these stocks will generate great returns in 2021.

My view is that there are quite a few stocks ranked among the most popular on Robinhood that could be big winners over the next 12 months. If I had to pick one most likely to soar in 2021, though, it would be ARK Innovation ETF (NYSEMKT:ARKK).

Sure, ARKK is technically an exchange-traded fund (ETF) that's on Robinhood's 100 most popular list. However, it trades like a stock. And I think it could provide investors the best shot at receiving an outsized return in the new year. 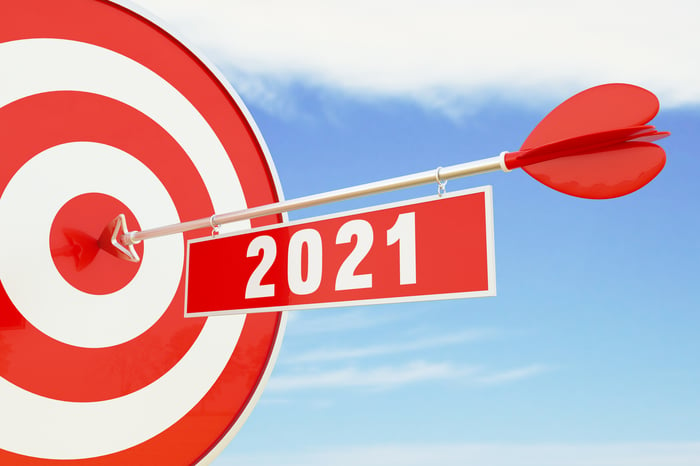 ARK Innovation ETF is a smart buy because it gives you lots of great stocks in one fell swoop. It typically holds between 35 and 55 individual stocks with the potential for disruptive innovation in their respective markets.

The ETF is managed by ARK Investment Management, which is led by founder and CEO Cathie Wood. She has a knack for identifying innovative, pioneering companies. To paraphrase the E.F. Hutton TV ad from years ago, when Cathie Wood talks, people listen.

Listening to her has paid well. Take a look at how ARKK performed compared to the S&P 500 index in 2020. 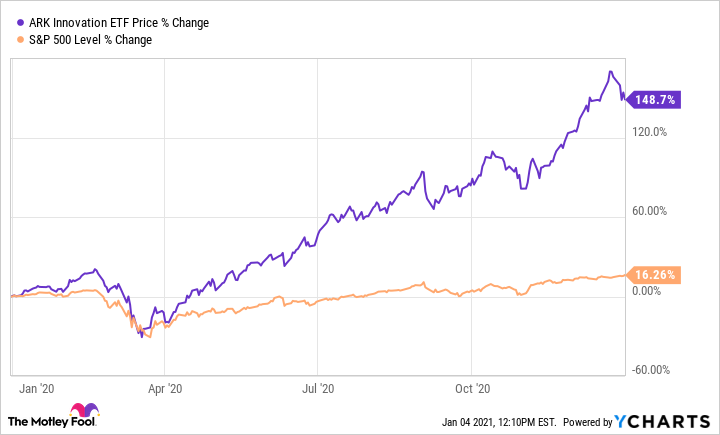 This performance last year wasn't a fluke. Since the inception of the ETF on Oct. 31, 2014, it has delivered a sixfold gain.

Just because ARKK has been successful in the past doesn't mean that its future will be bright. However, I think that the ETF's focus on disruptive innovators, combined with Cathie Wood's acumen, makes ARKK a great pick for 2021.

In particular, several of ARKK's top holdings appear poised to deliver strong gains this year. Roku (NASDAQ:ROKU), for example, soared 148% in 2020 (close to the same as ARKK itself). The market for streaming TV should enjoy continued momentum in 2021, sending Roku's share price even higher.

Wood is a big fan of healthcare stocks, especially those focused on genomics. She said in December, "The biggest upside surprises are going to come from the genomic space, and that's because the convergence of DNA sequencing, artificial intelligence, and gene therapies is going to cure disease."

ARKK's third-largest holding, CRISPR Therapeutics (NASDAQ:CRSP), ranks as a leader in CRISPR gene editing -- a disruptive innovation that's been hailed as the "biggest biotech discovery of the century." I expect major progress for CRISPR Therapeutics this year with its promising cancer cell therapies and experimental gene-editing treatments for rare genetic blood disorders.

Teladoc Health (NYSE:TDOC) is another healthcare stock that's high on ARKK's list. I'm also really optimistic about the telehealth services leader's prospects. My view is that Teladoc's acquisition of Livongo Health last year will give it a significant advantage in winning customers.

I'm on board with ARKK's bullish take on Square (NYSE:SQ) as well. The fintech stock ranks as ARKK's fourth-largest holding. My view is that Square will continue to outperform with its fast-growing Cash App peer-to-peer payment app. I also think that the increased availability of coronavirus vaccines will help small businesses recover, boosting Square's payment processing business.

Cathie Wood's adaptability is the primary reason I chose ARKK for this article. If anything happens to change her view on the prospects for a given company, she'll quickly adjust ARKK's position in the stock.

My Motley Fool colleague Jeremy Bowman recently wrote that Wood is the "star investor that investors should follow -- even more than Warren Buffett." I agree with Jeremy. The easiest way to follow this star is to buy the ARK Innovation ETF.