Amazon is buying planes, but it's a bit weirder than just that. 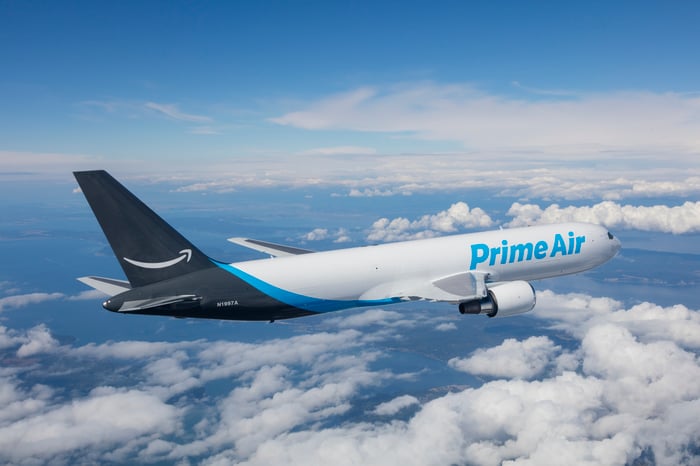 Why is it weird? Isn't it great news that Amazon is buying Boeings?

Well, sort of yes, but also sort of no. You see, Amazon isn't buying new Boeing airplanes, and it isn't even buying them from Boeing. Rather, as Bloomberg notes, the planes Amazon is buying for its Prime Air delivery service are all "used Boeing 767-300 planes" -- seven of which are being purchased from Delta Air Lines (NYSE: DAL), with four more coming from WestJet Airlines.

The former Delta jets are expected to join Prime Air in 2022, and the former WestJets will begin service this year, after first being converted from passenger airliners into an air freighter configuration.

If Amazon isn't buying jets directly from Boeing, though, why are investors taking this as good news for Boeing?

Because the short answer is that it isn't good news -- or at least not immediately. Over time, Amazon will presumably hire Boeing to maintain and perhaps make upgrades on its new airplanes, generating service revenue for the airplane-building giant. But the longer-term picture is even more important to Boeing. Bloomberg notes that this is the first time Amazon has ever bought airplanes outright, as opposed to leasing them from other companies. And if this is a sign of where things are heading, then there's every possibility that in future years, Amazon will buy airplanes directly from Boeing.

In that regard, after inducting the new planes into service, Amazon expects its Prime Air fleet to comprise about 85 planes by the end of 2022. The fleet is expected to more than double in size over time, moreover, to 200 aircraft.

And if that's correct, then Boeing should have plenty of opportunities to sell brand-new aircraft to Amazon in the future.