The Nasdaq Composite (NASDAQINDEX:^IXIC) continued to push further into record territory on Friday, with market participants starting to get the sense that stocks might be able to build on their outstanding performance in 2020. As of 2 p.m. EST, the Nasdaq was up about a half percent, staying ahead of other major market benchmarks that were on the decline Friday afternoon. The Nasdaq's gain for the year is nearly 2%.

Many investors think that tech stocks are the only place that Nasdaq investors are able to find the truly best gains. Yet there've been plenty of companies that have given shareholders outstanding performance over the past year. Two in particular are from the solar power industry -- both Sunrun (NASDAQ:RUN) and SunPower (NASDAQ:SPWR) quintupled investors' money in 2020. They've jumped out to a great start so far in 2021, and many see further promise for the two solar stocks. 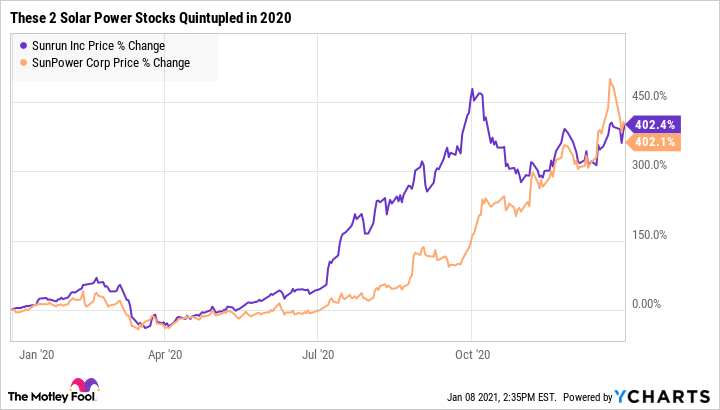 Sunrun shares were up another 3% after having been higher by as much as 7% earlier in the day. The company has benefited from a reawakened interest in solar power, even as low energy prices and a tough economy would have seemed to put pressure on solar.

Sunrun is now the largest installer of rooftop solar power generation systems in the U.S. market. With roughly 20% market share, Sunrun arranges to get homeowners to allow the company to install the systems. In exchange, homeowners get renewable electricity at reduced rates.

Sunrun has benefited greatly from low interest rates, because that makes financing its upfront expenses in solar installations much less expensive. With reliable monthly payments coming from its homeowner partners, Sunrun gets to pocket the difference -- and that's been a lucrative and growing amount recently.

Moreover, Sunrun is expanding. The company hopes to close soon on its acquisition of Vivint Solar, which would further boost its share of the U.S. residential solar market.

After quintupling in 2020, Sunrun shares are up another 35% just in the first week of 2021. That bodes well for the future, and shareholders are enjoying their day in the sun with the rising solar power player. 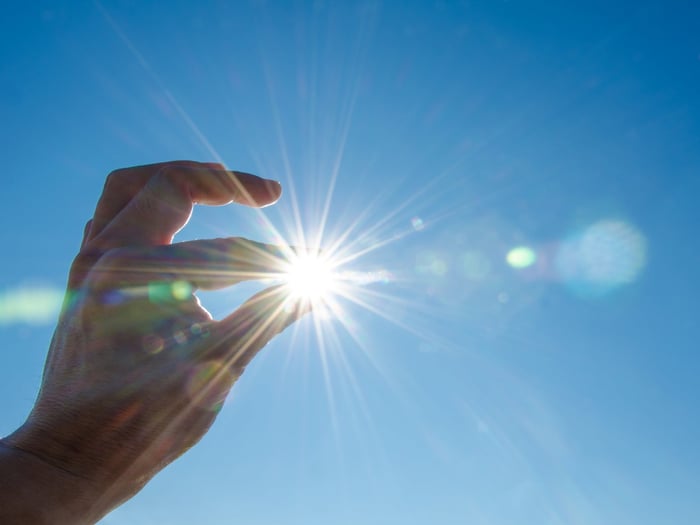 SunPower takes a moment in the shade

Meanwhile, SunPower (NASDAQ:SPWR) was down 6% on the afternoon. Nevertheless, the shares are higher by more than 15% so far this year, after a more than 400% rise in 2020.

SunPower is a much older player in the solar industry. The company has been operating for more than 20 years, and in that period, it's had a chance to participate in nearly aspect of solar power. Yet after experimenting with a vertically integrated model that's included installation and financing, SunPower now spends most of its efforts trying to specialize in offering innovative products and high-efficiency systems.

To help with that, SunPower has made a number of smart strategic moves. It's working with microinverter giant Enphase Energy (NASDAQ:ENPH) to get the equipment it needs to make every solar panel work its hardest. Meanwhile, SunPower's spinoff of its Maxeon (NASDAQ:MAXN) solar panel business allows it to source its panels from an independent third party, reducing its capital needs.

Going forward, SunPower has more exposure than ever to the success of solar power. With renewable energy poised to play a bigger role in U.S. energy policy in the future, both SunPower and Sunrun stand to benefit even more in 2021.