Renewable energy stocks have experienced a huge run-up in 2020, and Sunrun's (NASDAQ:RUN) has been no exception. The company's stock has gone from a ho-hum performer, delivering about half the returns of the S&P 500 since its IPO until the beginning of 2020, to vastly outpacing the index since then. What is making investors so enthusiastic about this solar innovator, and is the company positioned to live up to their expectations? How Sunrun is growing shareholder value

Sunrun is the largest installer and owner of rooftop solar systems in the U.S. It installs and owns about 20% of all the solar systems currently on U.S. homes. The reason Sunrun -- and not the homeowners -- owns all these systems is because it also finances them. Homeowners get to save on their electric bills for little or no cash up front, and Sunrun gets a long-term commitment for monthly payments, or "cash flows."

The difference between the value of these cash flows at present (or their net present value) and what it costs Sunrun to deploy these systems is what the company calls net earning assets and is at the core of Sunrun's value to shareholders. As of the third quarter of 2020, the company's net earning assets stood at $1.7 billion.

Thus, the company can increase shareholder value by financing and installing more systems, or by increasing the dollar value of each of these cash flows. And the company has found innovative ways to do both: sell more systems and collect more dollars from each system it sells.

Through the company's announced acquisition of Vivint Solar, it will add a large salesforce with robust expertise in door-to-door sales that has been growing Vivint's business at a healthy 24% annual rate.

Through the launch of Sunrun's Brightbox, a home battery product in mid-2019, the company has been growing the cash flows per home installation: A battery system commands a premium over a solar-only system, and in the third quarter of 2020 the company had grown the storage side of the business 45% from the same quarter a year ago. And it expects to double its battery attach rate in 2021.

But perhaps what sets the company apart from its main direct competitor, Sunnova Energy International (NYSE:NOVA), is its first-mover position in what is called virtual power plants, or VPPs. A VPP is an agreement to supply energy to a traditional utility at times of peak demand -- or what's called "grid services." Through these agreements, for example, Sunrun can sell the energy already stored (and normally sitting unused in its customers' home batteries) to the local utility when requested, and increase the dollar value of the cash flows it's already getting from the same homeowner. During its third-quarter 2020 earnings call, Sunrun said it expected that grid services would grow the net margin it derives from each customer by a whopping 25%, which will further improve net earning assets as VPP deployments grow.

And investors appear to be responding positively to these initiatives, as evidenced by how Sunrun's market capitalization has outpaced that of Sunnova in the wake of it announcing its acquisition of Vivint and its first VPP agreement in mid-2020. 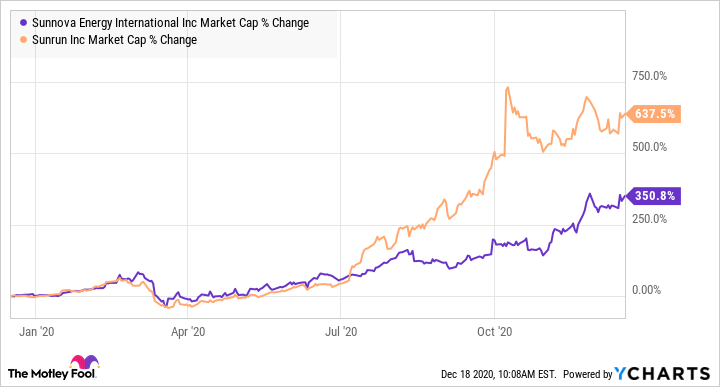 But where are the profits?

While Sunrun's earnings per share seem to be on an upswing since the middle of the year, the company has not been consistently profitable throughout its history. And its free cash flow has been negative and on a downward trend pretty much forever.

One way to become comfortable with this is to go back to the idea of committed future cash flows and the concept of net earning assets. At $1.7 billion in net earning assets, Sunrun could essentially decide to stop installing new systems, reduce its operating expenses to support collections and maintenance activities, become instantly profitable, and just collect cash flows valued at $1.7 billion for over two decades.

Besides being the largest installer and owner of rooftop solar in the U.S., Sunrun is among the top three overall owners of solar assets in the country -- and growing at nearly 30% yearly, even through a pandemic and a generally tough 2020.

It is also creating more value for shareholders for every new customer it signs up via its battery sales and VPP agreements. Additionally, this level of business is making it easier for the company to attract lots of capital at excellent terms, and to become a more efficient installer.

Efficiency was an area of concern at the time of the Vivint acquisition -- with Vivint spending up to $0.10 more than Sunrun for every revenue dollar it earned to bring customers in the door. But Sunrun seems to be finding other ways to bring down the cost of the systems it sells: It claims that it has improved the productivity of its salesforce by up to 40% from a year ago, resulting in savings of about $2,000  per system. A little quick math shows that these $2,000 in savings more than offset the additional customer acquisition costs brought in by Vivint. So Sunrun does seem to be using its scale to bring down overall costs.

While current stock valuations are a general concern for many investors, not just renewable energy investors, timing the market is a near impossibility. So waiting for valuations to come down maybe just as risky. And while the overall market may or may not correct at some point, Sunrun has demonstrated a resilient business model that will likely be worth a lot more five years from now than it is today.