We spent a lot of time on our smartphones in 2020. With the coronavirus pandemic keeping us indoors and socially distanced, we relied on our pocket computers more than ever. Some important mobile trends accelerated in 2020, and that was reflected in the apps we downloaded most frequently.

Apptopia recently released data on the most downloaded apps of 2020. Here are three stock-specific takeaways for investors. 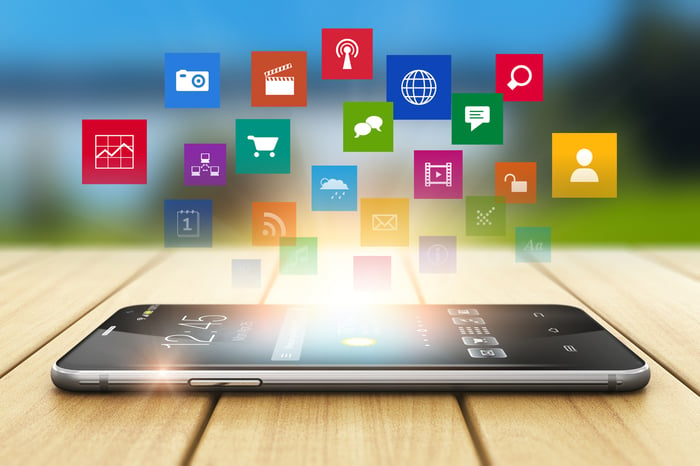 Americans downloaded DoorDash (NYSE:DASH) twice as much as they downloaded the Uber (NYSE:UBER) Eats app. That corresponds with data from Second Measure that shows DoorDash has twice the market share of Uber in the U.S.

But there are reasons to remain cautious of DoorDash's high-flying shares despite its strong position in the U.S. First, its position relative to Uber Eats global downloads remains unchanged from 2019. Uber Eats had nearly twice as many downloads worldwide versus the DoorDash app, which is more concentrated in the U.S. and Canada. That's despite Uber selectively trimming its Eats business in certain markets where it failed to establish a dominant market share.

The second factor to consider is Uber updated its main app to include Eats, making the Uber Eats app redundant for users in many markets. The main Uber app had 95 million downloads in the U.S. despite a massive reduction in travel this year. When combined with Uber Eats, Uber had 115 million total app downloads in the U.S. versus DoorDash's 39 million.

Investors interested in the food delivery space may want to consider whether DoorDash's stock is really worth its premium price over Uber.

Square (NYSE:SQ) saw its Cash App become the sixth-most-downloaded app in the United States in 2020. The app saw a big boost from tax refunds and government stimulus in the spring. On the company's first-quarter earnings call, CFO Amrita Ahuja said Cash App reached the top five apps on the iOS App Store at various points in April.

But Square has done a good job holding onto those users throughout 2020 and into 2021. Gross profit from Cash App more than tripled in the third quarter. Daily transacting Cash App users nearly doubled year over year.

Square continues to add new features to Cash App, and it's seeing strong adoption of them. Its most recent feature is stock trading, and 2.5 million users tried the service in less than a year, making it the fastest adoption rate of any service in Cash App. That's important because users that utilize multiple Cash App services generate three to four times the gross profit of those that just use peer-to-peer transfers.

The robust growth in downloads suggests Square saw strong inflow of new users throughout the year for its most valuable product.

Amazon is still the e-commerce leader

While Amazon (NASDAQ:AMZN) faced strong competition both domestically and internationally, it still remains at the top of the charts for smartphone shoppers. Amazon was the most downloaded shopping app in the U.S. and worldwide in 2020. That compares to 2018 and 2019, when it was bested by Chinese competitors in worldwide downloads.

Amazon's continued dominance in the U.S. is particularly notable in light of brick-and-mortar retail competitors like Walmart growing their market share of online commerce. Curbside pickup has become an important feature in the age of COVID-19, but Amazon has managed to serve its customers throughout.

What's more, Amazon appears to be making progress internationally, as global downloads climbed year over year. International sales growth accelerated from 13% to 31% in the first nine months of 2020, including 37% growth in the third quarter.

For investors looking to capitalize on the accelerating shift to e-commerce, the market leader may be their best option.

App downloads are a sign of adoption, especially as more of our economy moves to mobile devices. Remember, a download typically represents a new user or someone who got a new phone and deliberately opted to download the app again. Both bode well for net user growth. Investors should take a closer look at the trends fueling growth at Uber, Square, and Amazon, and evaluate the opportunity to buy their stocks.