Please ensure Javascript is enabled for purposes of website accessibility
Log In Help Join The Motley Fool
Free Article Join Over 1 Million Premium Members And Get More In-Depth Stock Guidance and Research
By Keith Speights - Jan 15, 2021 at 6:12AM

Both of these biotechs could be big winners in the COVID-19 vaccine market.

Here's a story of two biotechs. Both of them scrambled to develop COVID-19 vaccines last year. One of them, Moderna (MRNA 1.01%), ranked as one of the first two companies to win emergency use authorizations for its vaccine in the U.S., the U.K., and Europe. The other drugmaker, Novavax (NVAX -3.78%), hasn't reported late-stage results for its COVID-19 vaccine candidate yet.

Which of these two biotech stocks do you think was the bigger winner in 2020? Based only on the facts presented above, you might go with Moderna. However, Novavax actually delivered a staggering return of 2,700% last year -- more than six times greater than Moderna's performance.

What does that indicate about which of these stocks is the better pick now? Nothing. Here's what you'll really need to know to decide between Novavax and Moderna. 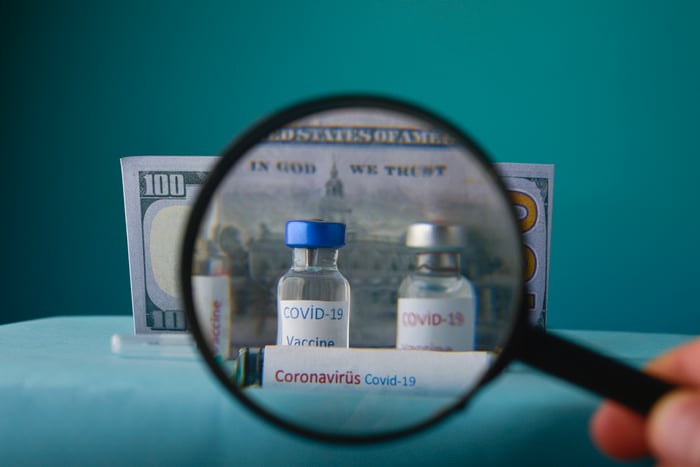 Probably the strongest argument for buying Novavax right now is that its market cap doesn't come close to reflecting the potential for its two lead pipeline candidates. Even after the jaw-dropping gains of last year, Novavax's market cap is still only around $8 billion.

Assuming all goes well with those studies, NVX-CoV2373 could make $3.8 billion this year, according to Bernstein analyst Ronny Gal's estimates. Achieving that sales level shouldn't be a problem for Novavax, considering that it's lined up big supply deals with multiple countries.

Then there's the company's other lead candidate -- flu vaccine NanoFlu. Novavax reported positive results last March from a late-stage study evaluating NanoFlu in a head-to-head matchup with Sanofi's FluZone Quadrivalent. NanoFlu came out on top over the current market leader. Novavax needs to complete a manufacturing lot consistency trial before filing for regulatory approval of its promising flu vaccine.

Estimates vary as to how much money NanoFlu will generate if approved. Peak annual sales of $1.7 billion are within the realm of possibility, though. Novavax is also exploring potentially combining NanoFlu and NVX-CoV2373 for post-pandemic use.

Some investors might think that Moderna is overvalued, with its market cap at close to $50 billion. But there's a good case to be made that the stock still has plenty of room to run.

Moderna should make at least $11 billion this year from its COVID-19 vaccine mRNA-1273. That number could very well rise if the company can increase its production output. If Moderna can generate this level of revenue on an annual basis, its current market cap isn't too steep at all.

The company recently announced good news that improves its prospects of strong recurring revenue. Moderna CEO Stephane Bancel stated that mRNA-1273 should provide protection against infection from the novel coronavirus for at least a year and potentially up to two years. That suggests that Moderna could rake in billions of dollars every year from booster shots.

Perhaps the best argument for buying Moderna, though, is its long-term platform potential. The company has maintained for quite a while that if its messenger RNA (mRNA) technology works for one disease, it could work for many diseases.

Moderna's pipeline already includes 13 clinical programs plus 10 preclinical programs. With major revenue soon to roll in, look for the company to dramatically increase its clinical development of mRNA vaccines and therapies.

Which of these two COVID-focused biotech stocks is the better buy? I think that Novavax is the best coronavirus stock for 2021. The company should have significant catalysts on the way soon. It's hard not to like Novavax's risk-reward proposition.

Over the longer term, though, my prediction is that Moderna will be an even bigger winner than Novavax. I expect we'll see many safe and effective mRNA vaccines launch over the next decade and beyond. I'm also cautiously optimistic about the prospects for using mRNA technology in fighting cancer and other diseases.