E-commerce has surged as a result of conditions created by the coronavirus pandemic, and top players in the space have delivered eye-catching returns. However, investors should know that the online retail revolution is still just getting started.

With that in mind, we put together a panel of Motley Fool contributors and asked each member to profile a top e-commerce stock to buy in 2021. Read on to see why they think Amazon (AMZN -1.51%), Etsy (ETSY -3.85%), and MercadoLibre (MELI 0.38%) are poised to crush the market. 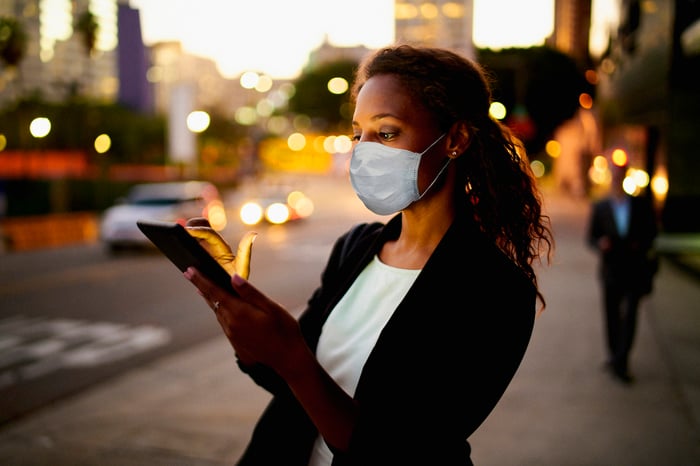 Keith Noonan (Amazon): Naming Amazon as a top e-commerce stock won't win points for originality. Investors who bought the stock at virtually any point in its publicly traded history have enjoyed market-crushing returns. It's still a great time to buy Amazon stock.

Amazon currently controls roughly half of the U.S. business-to-consumer e-commerce market. The online-retail giant has also shown that it's better at innovating than just about any other company out there.

In addition to its industry-shaping e-commerce service, Amazon leads the cloud computing market. The company is also building a fast-growing position in an industry that's parallel to online retail: digital advertising. Recent research from Cowen estimates that the company's platform will account for roughly 13% of global ad sales, excluding the Chinese market.

There's considerable overlap in the technology and data required to drive e-commerce, cloud computing, and digital advertising businesses forward, and that makes Amazon stronger as a whole. The company can also be counted as an early leader in potentially revolutionary trends including artificial intelligence, robotics, and autonomous vehicles.

Amazon is one of the best businesses in the world, and it's demonstrated a market-shaping penchant for innovation. The company's already massive size means it will have a harder time delivering relative growth compared to smaller players in the space, but Amazon stands out as a dependable industry leader that offers an attractive risk-reward dynamic for growth investors.

Joe Tenebruso (Etsy): If you're ever in need of a personalized, hand-made gift, chances are you'll eventually find yourself on Etsy.com. Buyers have flocked to the e-commerce marketplace during the pandemic to find goods they couldn't find elsewhere -- a trend that's likely to accelerate in the coming years.

Etsy excels at connecting makers with consumers. The number of active sellers on its platform surged 42% year over year to nearly 3.7 million in the third quarter, while the number of buyers soared 55%, to 69.6 million. Etsy earns a small fee from each transaction. Collectively, those fees added up to $341.6 million in the third quarter, a year-over-year increase of 141%. Etsy also offers sellers a range of services, from which it generated $109.9 million, up 95% from the prior-year period.

Face masks have been another major growth driver for Etsy during the COVID-19 crisis. This is a segment in which sales are likely to decline. But while many people have joined Etsy's marketplace for masks in the past year, they're likely to stay for its ever-growing selection of handcrafted goods. Gross merchandise sales (GMS) excluding masks on Etsy's marketplace climbed 93% to $2.2 billion in the third quarter.

Yet despite this torrid growth, Etsy has just scratched the surface of its long-term expansion potential. The company expects its online market opportunity to grow to $437 billion by 2023. With so much growth still to come, investors who buy Etsy's shares today should be well rewarded.

This leader is shaping powerful trends

Jamal Carnette (MercadoLibre): MercadoLibre is often referred to as "Latin America's Amazon," but even that lofty designation might be understating its true potential. Shares have been on fire over the last year, rocketing 160% higher as the pandemic has shifted many purchases online, but the long-term growth story is just getting started.

However, true in-the-know investors are more excited about the company's Mercado Pago digital payment platform. Initially conceived to support payments on MercadoLibre's site, it has expanded to include off-platform transactions, like grocery stores, and as a person-to-person money transfer mechanism. Mercado Pago continues to grow at a rapid clip, with total payment volumes growing 161% on a currency-neutral basis and off-platform volume growth coming in at 197% during the third quarter.

It's not often you find companies with two highly scalable businesses, but that's what MercadoLibre has with its e-commerce marketplace and digital payment solutions. Additionally, with MercadoLibre you have multi-decade growth drivers as internet penetration will boost e-commerce and the number of underbanked and unbanked citizens will boost demand for its digital payments solutions. Perhaps it's time to call MercadoLibre the "Amazon and PayPal of Latin America."

Why MercadoLibre Stock Was Down 13% Today

Why MercadoLibre's Stock Dropped 18.1% in April