Please ensure Javascript is enabled for purposes of website accessibility
Log In Help Join The Motley Fool
Free Article Join Over 1 Million Premium Members And Get More In-Depth Stock Guidance and Research
By Billy Duberstein - Jan 17, 2021 at 7:15AM

EV stocks have been all the rage, but these tech stalwarts are better values.

Electric vehicle stocks have boomed in the current market environment, thanks in no small part to Tesla's (TSLA 5.20%) meteoric rise. Now, other EV-centric companies are scrambling to tap into the enthusiasm for all things electric by going public and raising money.

However, investors should be careful. Just because another company throws its hat into the EV ring doesn't mean it's the next Tesla. Meanwhile, Tesla itself may be fully valued, or extremely overvalued, depending on whom you ask. Furthermore, the auto business is highly capital-intensive, meaning EV upstarts will have to lay out significant cash now in hopes of making profits one day -- a goal that's still uncertain.

With the mania for EVs at all-time highs, more value-conscious investors may wish to look at the following top tech stocks that also play into next-gen automotive trends. 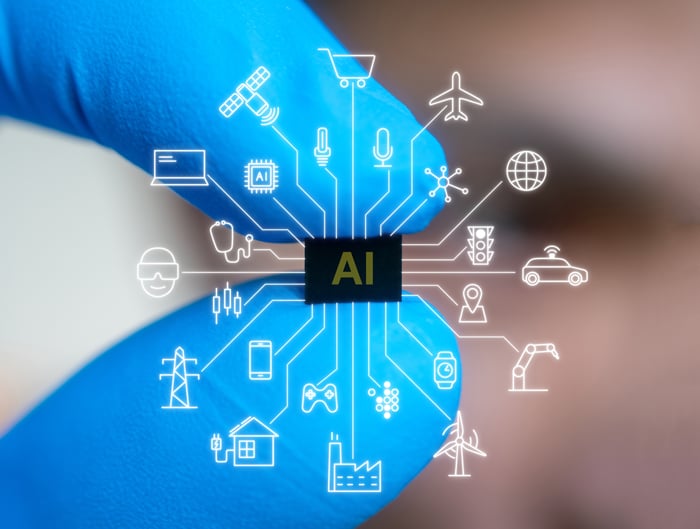 If autonomous takes share from human-driven cars, or if Tesla takes the EV crown versus another competitor, one thing's for sure: Every vehicle will be much smarter than the generation before it. Why? More semiconductors. Two of the premier auto-centric semiconductor producers out there are Microchip Technology (MCHP 0.60%) and NXP Semiconductors (NXPI 1.05%).

Microchip's portfolio is the broader of the two, spanning microcontrollers, microprocessors, FPGAs, RFID chips, memory products, and many other general-purpose semiconductors spanning auto, industrial, aerospace and defense, data center, communications equipment, and other segments. Back in the last "mostly normal" quarter ended in March, Microchip made 15% of its revenue from the automotive segment, and 28% from the industrial segment. Both are relevant for the production of next-gen vehicles.

The company has assembled such an impressive roster of chips via a string of acquisitions under aggressive but disciplined CEO Steve Sanghi. Microchip's most recent and largest was the purchase of Microsemi back in 2018 for $8.24 billion, funded completely with debt.

While that has somewhat strained Microchip's balance sheet, Microchip has already paid down about $1.8 billion of that debt since that time, all while maintaining its dividend and living through both the trade war and the COVID-19 pandemic.

Despite the big dip in automotive chips during the first half of 2020, NXP still expects the automotive end-market to grow at an average 7% to 10% over the next three years. For the whole company, management expects 5% to 7% growth.

Compared with the rest of the expensive technology sector and even some other semiconductor stocks, both Microchip and NXPI look very reasonably priced at 24 and 22 times next years earnings estimates, respectively. On the other hand, Tesla trades at 18 times next year's sales estimate.

Beyond the rise of EVs, the next big thing could be autonomous vehicles. Though probably a decade away from significant use at least, autonomous vehicles could still be a huge business over the long run. While Tesla is building its own autonomous system, Alphabet's (GOOGL 0.10%) (GOOG 0.20%) Waymo subsidiary has been at the game even longer.

While some analysts had initially valued Waymo in the hundreds of billions of dollars, Waymo raised outside money for the first time in early 2020, at a valuation of about $30 billion. Still, the participating investors were a who's who of the venture capital world, including Andreessen Horowitz, Silver Lake, Fidelity, and T. Rowe Price (TROW 1.00%). That's a pretty good boost to Waymo's credibility, showing this "moonshot" project may actually have real-deal technology.

In October, Waymo announced that it would expand its autonomous vehicle program in Phoenix, AZ, to allow all customers ride without a human safety driver. Previously, Waymo had invited only a handful of people to ride in its autonomous cars with a safety driver present.

Of course, Waymo is just one long-term bet for Alphabet, which seems undervalued based on the sum of its businesses across Search, YouTube, digital ad exchanges, and its exciting cloud computing unit.  Look for Alphabet's core digital ad businesses, where it gets the overwhelming majority of it revenue, to bounce back this year as the economy recovers from the coronavirus.