The stock market had another day of relatively quiet trading on Friday. Once again, the Nasdaq Composite (^IXIC 0.00%) stood out as the leader, pushing further into record territory. As of 3 p.m. EST, the Nasdaq was up about 0.2%, building on its huge gains in 2020 and so far in 2021.

Beginning investors often mistakenly believe that the Nasdaq's stocks all move roughly in unison. However, there's been a huge divide in the market for years, and it has gotten especially pronounced more recently. On Friday, the different moves from Magnite (MGNI 5.62%) and CSX (CSX 0.78%) tell both sides of the stock market story.

A big boost for Magnite

Shares of Magnite were higher by 7% on Friday afternoon. The advertising platform provider got a nice vote of confidence from Wall Street stock analysts.

The latest catalyst for Magnite came from Craig-Hallum, which boosted its price target on the shares from $25 to $45. Retaining the company's buy rating, Craig-Hallum explained that Magnite's opportunity to cash in on the fast-growing connected television advertising market gives it a strong chance to accelerate its sales gains in the coming year and beyond. Moreover, as the economy improves, Magnite should benefit from trends toward greater ad spending overall.

With the stock having quadrupled in just months, some skeptics are concerned that when you look back at the separate revenue figures for The Rubicon Project and Telaria, which combined to form Magnite last year, sales have actually declined from previous-year levels. In particular, growth in revenue from mobile and desktop channels has been much slower than the connected TV results.

Nevertheless, bullish investors have the upper hand with Magnite right now. That's no guarantee of future success, but it's symbolic of how Nasdaq investors are treating stocks with strong momentum right now. 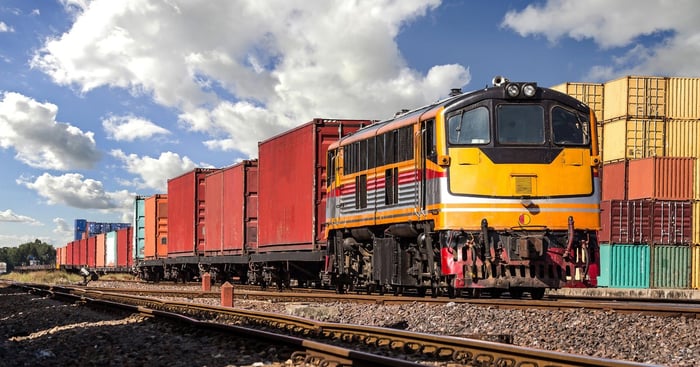 Meanwhile, railroad giant CSX was down 4%. The company reported quarterly financial results that left shareholders less than convinced about the future course of the transportation industry.

CSX's numbers were mixed. Revenue was down 2% from the previous year's fourth quarter, as lower fuel surcharge revenue and declines in coal-related revenue offset growth in the intermodal segment. Net income was down 1% year over year as well.

CSX's segments show how the business has shifted recently. Demand from e-commerce has dramatically increased intermodal shipments, and CSX saw an 11% boost in intermodal volume during the quarter. However, coal and mineral shipments have suffered from weak demand, and a difficult pricing environment for coal in particular has hammered what was once a massive source of business for the railroad industry broadly.

Competitive pressures from elsewhere in the industry have also weighed on CSX. Results from railroad rival Union Pacific (UNP 0.15%) showed it dealt with same challenges as CSX, with revenue and earnings moving lower even though efficiency levels have been on the rise. Railroads are doing what they can to make the most of a tough situation, but there's only so much that CSX and its peers can accomplish without a broader cyclical upturn. Many are hopeful that they'll get that turnaround in 2021, but shareholders in CSX seem less than certain.

These 4 Soaring Nasdaq Stocks Just Got an Unexpected Gift