Please ensure Javascript is enabled for purposes of website accessibility
Log In Help Join The Motley Fool
Free Article Join Over 1 Million Premium Members And Get More In-Depth Stock Guidance and Research
By Adam Levine-Weinberg - Jan 24, 2021 at 9:10AM

Democratic control of the White House and Congress may lead to investments that boost EV adoption, but that won't necessarily help Tesla.

Tesla (TSLA 7.43%) stock has rallied wildly over the past year, gaining more than 700%. Solid growth in vehicle deliveries and margin expansion have both contributed to the stock's surge. Tesla's inclusion in the S&P 500 index also helped.

Still, these factors can't fully explain Tesla's incredible rise. Tesla stock has doubled just since the middle of November, even though it hasn't reported earnings. It has risen 20% in the first three weeks of 2021, adding about $150 billion to its fully diluted market cap. 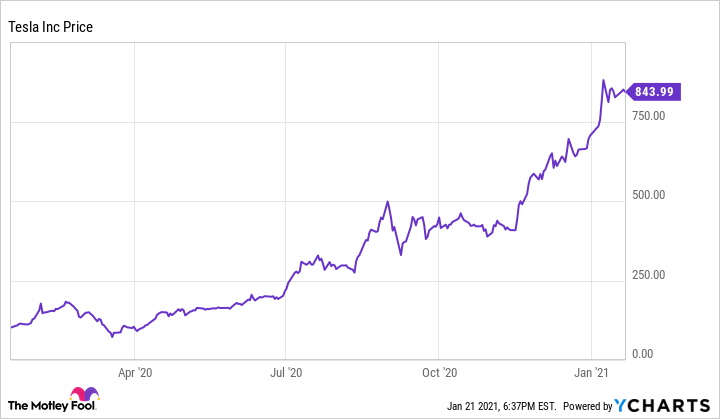 Investor optimism about a "blue sweep" -- Democratic control of the presidency, the Senate, and the House of Representatives -- seems to have provided extra juice to Tesla's rally in recent months. Many investors and pundits expect stronger government support for the electric vehicle industry with Democrats in control. However, the blue sweep could hurt Tesla just as easily as it could help the EV pioneer. Let's take a look.

Democrats tend to support aggressive efforts to combat climate change, including measures to boost EV sales. Most notably, the 2009 American Recovery and Reinvestment Act created a tax credit worth up to $7,500 for buyers of EVs and plug-in hybrids.

Those credits begin to phase out once an automaker sells 200,000 qualifying EVs or plug-in hybrids in the U.S. Tesla and General Motors both hit that milestone a couple of years ago, and the credits have phased out entirely for their vehicles. No other automaker has reached the 200,000-unit mark yet, and none are likely to get there until 2022 and beyond. Some investors hope that the government will restore Tesla's eligibility for EV tax credits or help it in other ways now that the Democrats control the presidency and both houses of Congress.

At first glance, these hopes don't seem outlandish. During his campaign and during the transition period, President Biden expressed support for removing the sales cap for the EV tax credit program. Furthermore, most experts agree that tax credits accelerate EV adoption. However, the Democrats hold razor-thin margins in both the House and the Senate. Biden will need to win the support of moderates to pass legislation. Expanding eligibility for the plug-in EV credit will only benefit Tesla and GM right now. That could make the measure controversial, particularly because Tesla is doing just fine without the credits.

Biden has spent more energy promoting a plan to install 500,000 public EV chargers by 2030. The goal is to support EV adoption by making fast chargers as ubiquitous as gas stations. That proposal stands a much greater chance of being implemented. Senator Joe Manchin of West Virginia -- a key swing vote -- has expressed firm support for infrastructure spending. Moreover, installing all of those chargers could create hundreds of thousands of jobs spread all across the country.

Whereas lifting the cap on the EV tax credit would boost demand for Teslas, a big investment in public charging infrastructure will mainly help its competitors. After all, Tesla drivers already have ample access to fast charging for road trips thanks to the company's Supercharger network. There are fewer fast-charging options for buyers of other automakers' EVs. Thus, Biden's charging station plan could level the playing field by fixing one significant problem for buyers of non-Tesla EVs.

Tesla's popularity is growing for many reasons. Customers like its vehicles' styling, performance, and in-car technology, as well as the brand's overall image. The Supercharger network certainly represents a competitive advantage today, but losing that advantage won't cause Tesla's growth to stop.

That said, if the Biden Administration removes charging worries as a barrier to the purchase of non-Tesla EVs, it will help other brands sell significantly more EVs. Over time, that could make those brands seem like legitimate competitors to Tesla in the EV market.

If Tesla stock were still trading at its early 2020 valuation, this wouldn't be a big deal. But with a fully diluted market cap approaching $1 trillion, Tesla is pricing in a level of market share that would be unprecedented. The more help other automakers get in transitioning to EVs, the lower the likelihood of Tesla capturing a 20%-plus share of the global auto market over the next 10 to 15 years (as Elon Musk hopes). That makes the blue sweep potentially bad news for Tesla.