The company will focus on antiviral and anti-inflammatory treatments for patients infected with COVID-19.

Pharmaceutical giant Merck (MRK 1.37%) officially threw in the towel on its efforts to develop a COVID-19 vaccine. The company said it's discontinuing the development of two candidates, V590 and V591, after a review of results from phase 1 studies indicated that they were unlikely to provide adequate protection against the coronavirus. It will instead focus its COVID-19 research and production capabilities on two therapeutic drugs for the disease.

Merck had hinted at a conference last month that the efficacy rates of Moderna's mRNA vaccine and the one developed by collaboration partners Pfizer and BioNTech were better than it had expected, and set a high bar for its efforts. As it turned out, V590 and V591 produced immune responses that were inferior not only to those produced by other vaccines, but to those seen in patients who have recovered from COVID-19 infections. 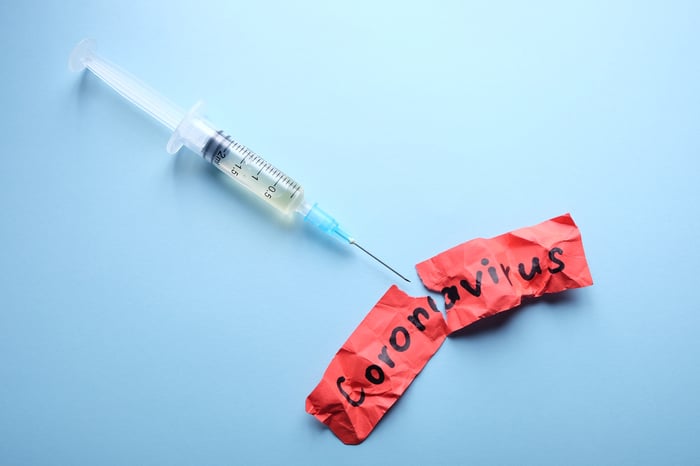 Merck is the second-largest vaccine seller in the world, but had hesitated to develop one for COVID-19, falling months behind in the race. Eventually, it launched programs to develop single-dose vaccine candidates based on proven technology, one using the viral vector Merck uses in its approved Ebola vaccine, and one from a company it acquired last year in the hope of getting multiple shots on the COVID-19 goal. Instead, Merck will take a non-cash charge to its fourth-quarter earnings for the programs.

However, the pharma company still has high hopes for two COVID-19 treatment candidates. MK-7110 is an anti-inflammatory drug that appears to reduce the risk of death or respiratory failure in moderately to severely ill COVID-19 patients by as much as 50%. Phase 3 trial results for it are expected in the first quarter. Molnupiravir (MK-4482) is an oral antiviral being evaluated in partnership with Ridgeback Biotherapeutics. Its trials are expected to be completed in May. If successful, that drug could compete with Gilead's remdesivir, which faces some skepticism over its efficacy.