It's rare that an FDA-approved drug is known more by its generic name than its brand name. It's also rare that a drug receives widespread publicity well before it reaches the market. Both scenarios, however, apply to Gilead Sciences' (NASDAQ:GILD) remdesivir, which is marketed under the brand name Veklury.

Remdesivir generated sales of $873 million in the third quarter, its first full quarter on the market. There's no question whatsoever that Gilead's COVID-19 drug will become the big biotech's newest blockbuster in Q4. But will the success story for remdesivir only a be short-lived one? 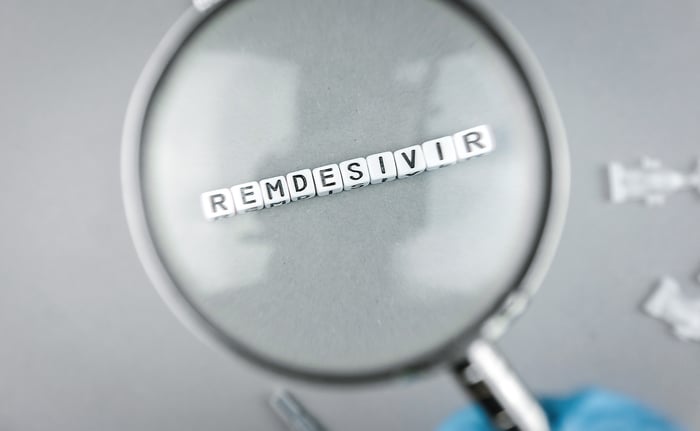 Gilead's huge Q3 sales for remdesivir were made before the results from the largest clinical study evaluating the drug in treating COVID-19 patients were released. That's probably a good thing for the company.

Last month, the World Health Organization (WHO) announced data from the Solidarity clinical study that included more than 11,000 people across 30 countries. This study evaluated four drugs as potential treatments for COVID-19 -- remdesivir, hydroxychloroquine, HIV combo lopinavir with ritonavir, and interferon-β1a.

The results of the study weren't what Gilead wanted. None of the drugs reduced patient deaths. The clinical study also found that remdesivir didn't impact the duration of hospitalizations.

It's important to note that the Solidarity study results haven't been published in peer-reviewed journal yet. Gilead quickly responded to the WHO study, stating that the data "have not undergone the rigorous review required to allow for constructive scientific discussion, particularly given the limitations of the trial design." In particular, the company pointed out that the Solidarity study "prioritized broad access, resulting in significant heterogeneity in trial adoption, implementation, controls and patient populations." Because of this, Gilead maintained that "it is unclear if any conclusive findings can be drawn from the study results."

Still, the Solidarity study has sparked a controversy about remdesivir and caused increased skepticism about the drug among some in the scientific community. It's possible that this could make some physicians less likely to prescribe remdesivir.

Even if skepticism about remdesivir has no impact at all on the drug's sales, Gilead has bigger worries. Arguably the most significant threat to remdesivir is the potential for more effective therapies to take away market share.

For example, a clinical study has already determined that dexamethasone appears to be effective in reducing deaths in hospitalized patients with COVID-19. The steroid helps suppress the immune system response, thereby preventing the body's immune system from attacking healthy tissues as it fights the novel coronavirus.

Antibody therapies could also become key weapons in the fight against COVID-19. Regeneron's preliminary results from a phase 2/3 study of REGN-COV2 found that the antibody cocktail significantly reduced viral load and patient medical visits, including hospitalizations and emergency room visits. Although enrollment of patients requiring high-flow oxygen or mechanical ventilation in the study was put on hold because of safety concerns, REGN-COV2 could still be an important therapy for treating patients with less severe cases of COVID-19.

A blockbuster but not a silver bullet

Gilead is fully aware of all of these factors, of course. The company noted in its Q3 results that Veklury (remdesivir) "generates revenue within a highly dynamic and complex global health environment, which continues to evolve."

Unfortunately for Gilead, it faces similar issues in other areas as well. The biotech's attempts to expand behind its HIV and hepatitis C franchises still haven't delivered huge wins yet. Its cell therapies obtained with the 2017 acquisition of Kite have yet to generate a positive return on investment. Gilead's big bet on moving into the immunology arena ran into a major obstacle with the FDA's thumbs-down on approval of filgotinib in treating rheumatoid arthritis.

Yes, remdesivir will be a blockbuster for Gilead. However, it's not a silver bullet that solves all of the problems for the beaten-down biotech stock.