Please ensure Javascript is enabled for purposes of website accessibility
Log In Help Join The Motley Fool
Free Article Join Over 1 Million Premium Members And Get More In-Depth Stock Guidance and Research
By Bradley Freeman - Jan 29, 2021 at 7:06AM

These two promising businesses operate in niche spaces that the market is yet to recognize.

One of the most compelling parts of owning stocks is that the potential gains are unlimited, while losses are limited to one's original investment. Several small companies have delivered life-altering returns to investors over the very long term on the way to becoming much larger companies -- and several more will do so in the future.

Here, we will explore two small caps with immense upside that could very well grow into big caps in the coming years.

1. CuriosityStream is ideally positioned in entertainment

CuriosityStream (CURI -3.53%) is a streaming service born with a focus on factual entertainment -- a niche area providing it with a few key advantages. This service was launched by John Hendricks, the founder of Discovery Channel, after he quit as chairman of Discovery, Inc. (formerly Discovery Communications) in 2014.

Factual content comes with production costs ranging from 5%-10% of the cost of scripted content. This affordability should allow the company to build a content library of several thousand shows with a budget a fraction of the size of competition such as Netflix or Disney. 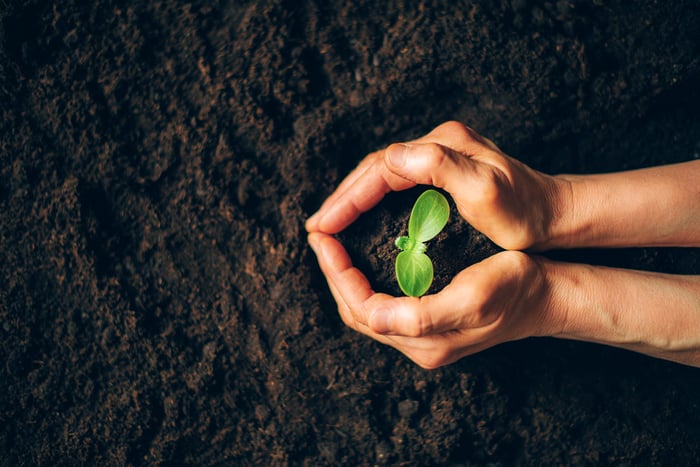 Furthermore, the service's sole focus on factual, educational content makes CuriosityStream a perfect partner for universities. Discovery Channel, on the other hand, has shifted more and more to reality content over the years -- content not well suited for educational purposes. CuriosityStream's advisory board consists of several higher-ups at esteemed universities, offering more signs of this endeavor being potentially promising.

With an enterprise value of roughly $717 million, if the company can perform financially like it thinks it can, shareholders should be quite happy.

This year, the company expects to grow sales by 80% to roughly $71 million. For the years 2021-2023, the company is forecasting a 68.8% compound annual growth rate (CAGR) to reach $202 million in revenue. By 2022, CuriosityStream is expecting to become profitable, and double profits to $29.8 million the following year.

To reach these ambitious goals, the company thinks it will need just over 79 million subscribers by the end of 2023, and the company is on track to reach it goal. It has crossed the 13 million-mark as of its most recent quarter. The future is always uncertain, meaning these company targets could always fall short. Still, based on management calculations, investors have reason to trust that it can deliver.

John Hendricks' decades at the helm of the cable network likely gives him a great feel for the factual entertainment business and puts him in a unique position to forecast subscriber and revenue goals. Hendricks also brought several former Discovery executives to CuriosityStream with him. And finally, his recent CuriosityStream stock buying spree is encouraging to say the least.

This company has plenty of execution left to do. If it can succeed, the future should be immensely bright.

Green Thumb Industries (GTBIF -3.81%) is a multi-state operator in the U.S. cannabis industry, and it's firing on all cylinders.

Based on average analyst estimates, Green Thumb trades at a forward sales multiple and a forward earnings multiple of 7.65 times and 66.1 times, respectively. This combination of growth, profitability, and affordability is quite hard to come by in today's public markets.

Growth for the cannabis sector as a whole should also provide the company with a long runway for expansion. According to New Frontier Data (an independent third party) the U.S. cannabis market is poised to explode to $35 billion in sales by 2025, powered by a brisk CAGR of 18%.

Cannabis legalization is not slowing down, either. In the last election cycle, every single piece of state cannabis legislation passed convincingly (in red and blue states). Legalization in states like New Jersey offers Green Thumb another large area to grow into, and also puts more pressure on places such as New York to legalize as well. COVID-19 only adds to the need to collect more taxes, and cannabis legalization would do just that while also benefiting Green Thumb's business.

CuriosityStream and Green Thumb industries are in the early innings of their respective life cycles. Both have plenty left to prove, and for both, executing could lead to explosive shareholder returns. I own both and strongly believe you should consider the two as long-term investments.