Please ensure Javascript is enabled for purposes of website accessibility
Log In Help Join The Motley Fool
Free Article Join Over 1 Million Premium Members And Get More In-Depth Stock Guidance and Research
By Billy Duberstein – May 1, 2019 at 10:44AM

The emerging cannabis industry in the United States is really taking off -- as have the industry's investment bankers!

There have been an absolute slew of cannabis mergers in recent months, as the largest players join forces with others in complementary states, since it's still illegal to transport cannabis products over state lines. At the same time, every player is honing its strategy. Does the company emphasize products or retail locations? Technology or real estate? Market share, growth, or profitability?

Green Thumb Industries (GTBIF -4.00%), a U.S. cannabis company based out of Chicago, has definitely gone with an emphasis on products, taking a page out of the branded consumer packaged goods industry. The company's core products include Rhythm vaporizer pens, DogWalkers pre-rolls, and the Feel Collection tinctures.

Green Thumb isn't totally neglecting the four-wall retail space, either, but the company has chosen to bid on licenses only in states with a limited number of available licenses, therefore seeking to open its Rise-branded stores only in areas with limited competition. These include Pennsylvania, Ohio, Maryland, Illinois, and Massachusetts, with Florida on the way.

However, Green Thumb recently made a very posh acquisition that not only expands the company's geographic reach but also gets it into the "High End" of cannabis brands – literally. 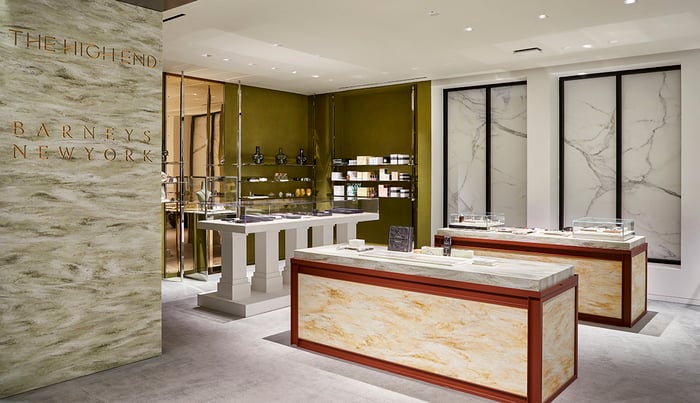 The Hermes of marijuana

In February, Green Thumb acquired Beboe, a luxury cannabis brand founded in California in 2017. California is the largest U.S. market, but doesn't have a limitation on licenses, which is why Green Thumb had previously focused on other states. Nevertheless, Beboe products, which include rose-gold vaporizer pens, edibles, and CBD-infused drinks, have already earned their way into 125 retail locations in California and Colorado. The company was founded by fashion executive Clement Kwan and celebrity tattoo artist Scott Campbell, who has tattooed the likes of Johnny Depp and Jennifer Aniston and has been dubbed the "Hermes of marijuana" by The New York Times.

At the time of the acquisition, Beboe had already inked a deal with luxury department store Barney's New York (Private) to open a new kind of head shop. The Beboe-Barney's luxury store is called the High End, and it opened on the fifth floor of Barney's flagship Beverly Hills store in late March.

The partnership is likely to be beneficial to both. Beboe gets exposure to clientele with disposable income more likely to pay premium prices for luxury cannabis goods, while Barney's generates some buzz for itself (pun intended), just as the legacy department store model is on the decline.

Unsurprisingly, Green Thumb is paying for Beboe in stock, though the exact terms weren't disclosed. The company did disclose in its press release that the amount was "non-material."

What Green Thumb gets

The deal does a number of things for Green Thumb. With one transaction it gains geographic exposure to the California and Colorado markets, as well as a high-end luxury brand to fill out its brand portfolio. Green Thumb is doing what many food and apparel companies have done, which is to amass a portfolio of brands geared toward different customer segments.

In addition, Green Thumb is rapidly expanding its production facilities in the other eastern states where it operates, and the acquisition will allow the company to produce and distribute Beboe products in these additional states, which could lead to significant revenue synergies as well.

Finally, Beboe's management team may add significant retail expertise to Green Thumb's executive bench. Kwan had previously worked at fashion brands Diesel and Dolce & Gabbana, which may jibe nicely with Green Thumb's CEO Ben Kovler, who is heir to the Jim Beam fortune and has similar expertise in parallel industries.

Is CPG really the way to go with CBD?

These marketing and branding moves are all very exciting, but investors should remember that the legal cannabis industry is still very nascent, and it is entirely unclear what kind of brand premium people will pay for manufactured cannabis products. It's also not as if the "luxury cannabis" ethos is unique -- other companies are making similar plays at both the retail and the product level.

In addition, the traditional branded consumer packaged branded goods industry is under heavy pressure from private labels. MedMen (MMNFF 4.42%)seems to understand this and is focusing on its retail locations over products (though it also recently started its own private label brand, Statemade).

Just because a company has a well-known brand doesn't mean it will succeed. Nevertheless, Green Thumb is making significant moves to expand its reach. The company earned a vote of confidence from legendary hedge fund manager Lee Cooperman last fall, so it's always worth noting when the company makes a new move.