Last week was a bumper one for department store chains. J.C. Penney (OTC:JCPN.Q), Macy's (NYSE:M), Kohl's (NYSE:KSS), and Nordstrom (NYSE:JWN) all soared more than 10% as the retailers reported third-quarter earnings.

However, the surge in the stocks seemed to be more a result of low expectations rather than strong performance. 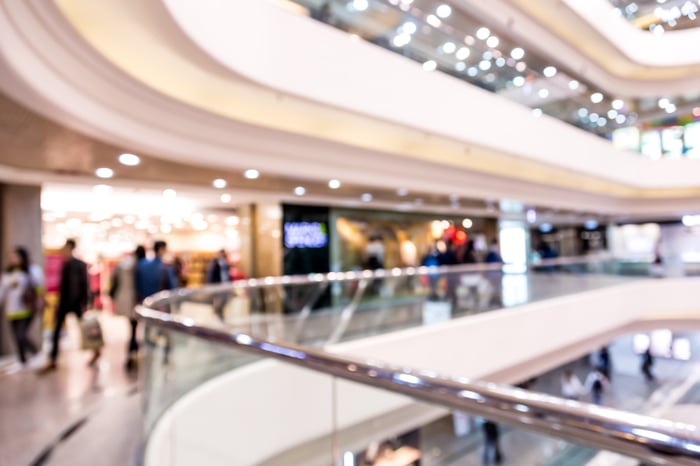 Of the four companies, only Nordstrom reported positive same-store sales growth, at 2.4%, which was in part due to the shift of its annual anniversary sale to the third quarter. That key metric, which strips out the effect of newly opened stores, fell 2.7% at Macy's, 0.8% at J.C. Penney, and 1.7% at Kohl's.

There were positive signs in addition to comparable sales growth at Nordstrom. Macy's raised its full-year comparable sales guidance from a loss of 3%-4% to a decline of 2.5%-3%. Bottom-line results were better than expected at Kohl's, and J.C. Penney maintained its guidance of positive earnings per share for the full year, which it hasn't done since 2011. A number of CEOs also expressed confidence about the upcoming holiday season, though comparable sales expectations were modest.

Still, there's good reason to think things might get worse for the department store chains before they get better.

While department store chains search for ways to drive traffic to their stores, the competition from e-commerce, namely Amazon.com (NASDAQ:AMZN), keeps heating up. Over the last year, Amazon has added dozens of new fulfillment centers and expanded its Prime Now program, which offers delivery within one hour. It's also added millions of new Prime members, meaning it's ready to grab an even greater share of holiday shopping this year -- and the fourth quarter is always a banner one for e-commerce. Last holiday quarter, the percentage of retail sales happening online spiked to nearly 8.7%. This year, it could come close to 10%.

Department stores are fully aware of this shift. Macy's is closing its underperforming stores, and physical retailers are trying to leverage the omnichannel platform, or combing physical and online, in any way possible, but it's often not enough.

In the third quarter, Nordstrom was able to grow comparable sales largely because sales at Nordstrom.com were up 20%. However, comps at its full-line stores fell 4.5% and are down 6.3% through the year, indicating a structural, lasting problem at its core business. Its attempt to diversify with the acquisition of the e-commerce business Trunk Club also seems to have backfired as the department store took a $197 million goodwill impairment charge on the brand in the last quarter.  The company stated, "While this business continues to deliver outsized top-line growth, current expectations for future growth and profitability are lower than initial estimates."

Macy's, meanwhile, is busy selling off its core real estate, but expanding its off-price Macy's Backstage chain and the beauty-products chain Bluemercury. Earnings per share plummeted 70% in its last quarter.

Kohl's has seen flat or declining profits for five years, and despite efforts to jump-start omnichannel sales, comps remain down.

J.C. Penney may have the best strategy of the group as it is increasingly pivoting to experience-based services like hair salons, as well as expanding its partnership with Sephora. The company is also targeting plus-size women's clothing, and launching appliances to take market share from Sears. However, apparel sales were weaker than expected, causing the company to lower its comparable-sales guidance for the year.

With the rise of e-commerce, brick-and-mortar retailers increasingly need to offer experiences rather than just products. Malls understand that. That's why they're turning away from department stores, and toward restaurants, movie theaters, gyms, and alternative tenants such as churches and offices.

The department store, which thrived in the 20th century as a central place where customers could pick up a wide range of products, is increasingly becoming obsolete, because consumers prefer specialized stores or simply shopping online. While the recent enthusiasm on Wall Street is certainly welcome for department store investors, there is no easy fix for this problem. Moving toward experiential shopping is a step in the right direction, but it's not a cure-all.