The U.S. marijuana market is projected to hit $80 billion upon full federal legalization, with an annual growth rate reaching 20% over the next 10 years. There is now approximately 66% bipartisan support for marijuana legalization (compared with just 17% in 1971), showing the likeliness of the drug's imminent arrival into consumer markets.

As a result, investors are buying up shares of U.S. growers en masse. Year to date, shares of mid-cap cannabis company Green Thumb Industries (OTC:GTBIF) have appreciated by more than 36%. That's a staggering outperformance, considering the S&P 500 index saw no change during the same period.

Despite a remarkable rally, I think Green Thumb's momentum will continue rewarding shareholders for the long term. Let's take a look at why everyone is talking about this leading U.S. marijuana grower. 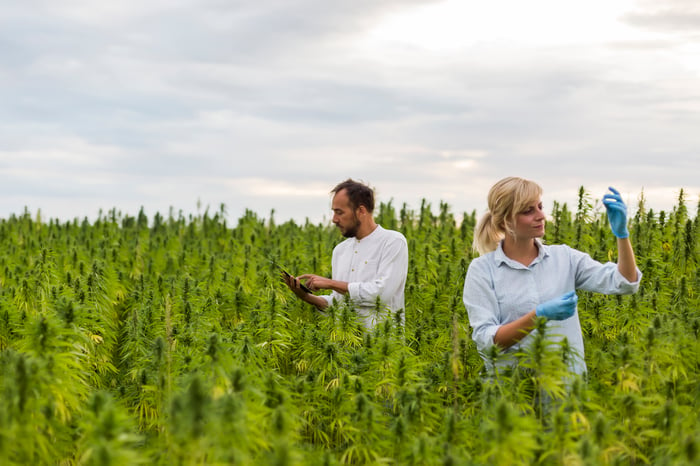 Green Thumb operates 13 manufacturing facilities spanning 12 states that produce six consumer cannabis brands. As reported in its last investor presentation June 8, the company has more than 46 retail stores open, with most of them seeing more than 50% growth in same-store sales over last year.

If that growth sounds like a lot, it is -- but in reality, it's also an understatement. In the first quarter of 2020, the company's revenue grew by a whopping 268% over the prior-year period, to $102.6 million. At the same time, its gross profit more than quadrupled, from $12.8 million in Q1 2019 to $53 million in the most recent quarter. The company's gross margin also improved to 52%.

That's not all. The company also reported adjusted earnings before interest, taxes, depreciation, and amortization (EBITDA) of $25.5 million. At an adjusted EBITDA margin of more than 25%, Green Thumb is one of the most profitable companies the cannabis sector has ever seen. And it is unlikely that these expansion efforts will slow down, as Green Thumb has acquired licenses to open up to 96 stores across the nation, more than double the number it operates today.

Green Thumb is doing a fantastic job managing its balance sheet. The company's cash amounts to $71.5 million, and it has $92.9 million in debt. Additionally, the company has more than $850 million in shareholder equity and $1.2 billion in total assets. Considering Green Thumb is profitable, I see no reason why the company would need to sell new stock (thereby diluting existing shareholders) or go deeper into debt to continue its operations, like the majority of marijuana companies.

Green Thumb is trading for about 7 times price-to-sales and 29 times price-to-EBITDA. At first glance, these levels may seem a little expensive. However, it is important to keep in mind investors are getting a lot in return for the price they pay.

For a company that is growing its revenue by more than 200% year over year, returning a profit, and rapidly expanding across the U.S., Green Thumb's valuation is far cheaper than those of many other marijuana companies that are struggling to impress shareholders. Hence, I think Green Thumb would be a solid growth stock for cannabis investors.

Why Is Everyone Talking About Green Thumb Industries Stock? @themotleyfool #stocks $GTBIF Next Article
Current