Please ensure Javascript is enabled for purposes of website accessibility
Log In Help Join The Motley Fool
Free Article Join Over 1 Million Premium Members And Get More In-Depth Stock Guidance and Research
By Jim Halley - Jan 29, 2021 at 7:23AM

Pfizer already is putting its COVID-19 vaccine into people's arms, while Johnson & Johnson's is waiting to be approved.

Pharmaceutical companies Pfizer (PFE 3.59%) and Johnson & Johnson (JNJ 1.75%) are two of the biggest players in the race to vaccinate the world against COVID-19. Pfizer's vaccine, produced in coordination with BioNTech, was granted Emergency Use Authorization (EUA) by the U.S. Food and Drug Administration (FDA) on Dec. 11, giving it a head start on all other coronavirus vaccines in the U.S.

Normally, vaccines take years to develop, not months. Johnson & Johnson's vaccine, which may come out as early as February, may ultimately be the preferred option, however, for practical reasons and because of the strength of the company's manufacturing as the largest pharmaceutical company in the world with more than 130,000 employees. Let's dig in to determine which is the better coronavirus pick today. The race is a marathon, not a sprint

Pfizer's vaccine must be shipped at around negative 70 degrees Celsius, requiring special freezers, before it is thawed for use. It is then administered in two doses roughly three weeks apart. It works by stimulating recipients' bodies to produce spike proteins that mimic those on the virus, using instructions delivered via messenger ribonucleic acid (mRNA). Those proteins spur their immune systems to produce antibodies that will fight SARS-CoV-2, the virus that causes COVID-19.

Johnson & Johnson's vaccine candidate is still in a phase 3 trial, but it could be given its EUA by the FDA as early as February, according to the Department of Health and Human Services. J&J's vaccine requires only one dose, and it can be stored in a typical refrigerator, creating fewer logistical problems. Instead of RNA, it relies on deoxyribonucleic acid (DNA) to prompt the recipient to fight SARS-CoV-2; it does this by using a weakened version of one common-cold virus, adenovirus 26, to carry genetic material from the spike protein found in SARS-CoV-2 into the body, causing the immune system to produce antibodies that defend against it.

Pfizer obviously has a head start. Yet according to USA Today, just 6% of people in the U.S. have received one coronavirus vaccine shot and only 1% have already received two doses. Pfizer said it produced more than 70 million doses by the end of December, and along with BioNTech, has pledged to produce 2 billion more for the U.S. by July.

Johnson & Johnson's vaccine, which has easier cold-storage requirements and better portability and requires just a single dose, might end up dwarfing its rivals. The company said this week that it is on track to produce 100 million doses of its vaccine by the end of June. Pfizer's vaccine was shown to be 95% effective at preventing coronavirus infection.. In interim results, The New England Journal of Medicine reported only that the efficacy of Johnson & Johnson's vaccine was above 90%.

Johnson & Johnson's vaccine may have an edge by being nearly as effective but much more practical and easy to distribute.

Looking past the coronavirus side of things

If you're buying either of these pharmaceutical stocks purely for a coronavirus bump, you're looking at them the wrong way. Both stocks have great long-term potential.

Pfizer stock offers an annual dividend of $1.52 per share, one of the best dividends among major pharmaceutical companies, with a current yield of 4.18%. Its cash dividend's payout ratio is 80.65, so there's concern the dividend could be slashed, as it has increased more than 171% over the past 10 years, meaning earnings growth has slowed compared to the company's dividend growth. One reason that yield is so high is that Pfizer's revenue numbers have declined for two consecutive years, and its stock has fallen more than 3.5% over the past year. In the third quarter, the company's revenue was $12.1 billion, down 4% year over year. And through the first nine months of 2020, it was $35.9 billion, down 8% over the same period in 2019.

Johnson & Johnson is a Dividend King, having increased its dividend for 58 consecutive years. Its annual dividend was $4.04 per share last year after a 6.3% raise, giving it a current yield of 2.36% and a safe cash dividend payout ratio of 56.39. Johnson & Johnson's shares are up more than 13% over the past year. J&J just released its fourth-quarter report, showing that the company had a solid quarter, with reported revenue of $22.5 billion, up 8.3% year over year. Its yearly revenue, despite pandemic headwinds, was up for the fifth consecutive year -- although annual net income was down 2.7%, in part because of $5.1 billion in net litigation expenses related primarily to opioid cases. 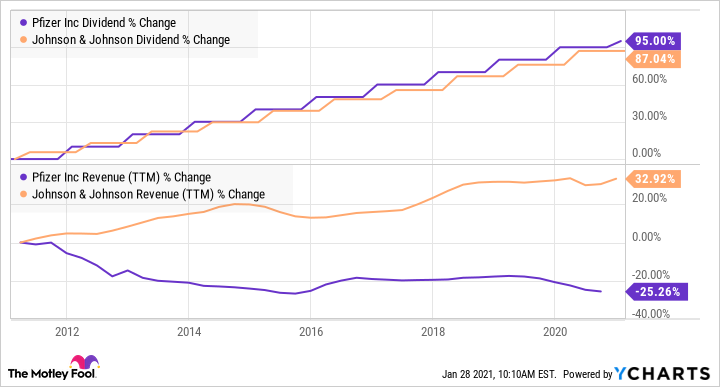 Of the two stocks, I'd go with the safer choice of Johnson & Johnson. We're still in the early stages of coronavirus vaccine sales, and Johnson & Johnson will have little problem catching up because its vaccine will be more adaptable and useful given current distribution capabilities. Looking beyond coronavirus concerns, while Pfizer is mainly a pharmaceutical company, J&J is much more diversified; its pharmaceutical segment leads the way, but its other two divisions -- consumer health and medical devices -- are big revenue drivers which, while slowed by the pandemic, will likely spring back once the pandemic ebbs. Johnson & Johnson's diversification allowed it to push through the pandemic, and if its vaccine takes off (as many expect it will), the company could be in for a record year.