Please ensure Javascript is enabled for purposes of website accessibility
Log In Help Join The Motley Fool
Free Article Join Over 1 Million Premium Members And Get More In-Depth Stock Guidance and Research
By Rich Duprey - Jan 29, 2021 at 8:03AM

There is a good reason to buy the retailer's stock, but it's not the one driving shares higher now.

Bed Bath & Beyond (BBBY -6.72%) has turned from a company reeling toward irrelevance to one that, while not firmly on the path to growth, is at least heading in the right direction with leadership that has a solid grasp of what it needs to achieve next.

Yet the meteoric rise of its stock in the past week is not tethered to the reality of that comeback. Rather, it's part of a game being played to punish short-sellers who have staked out large positions betting the home goods retailer will fall.

That's why I'm ignoring all the hype surrounding its rise, and why you should too. 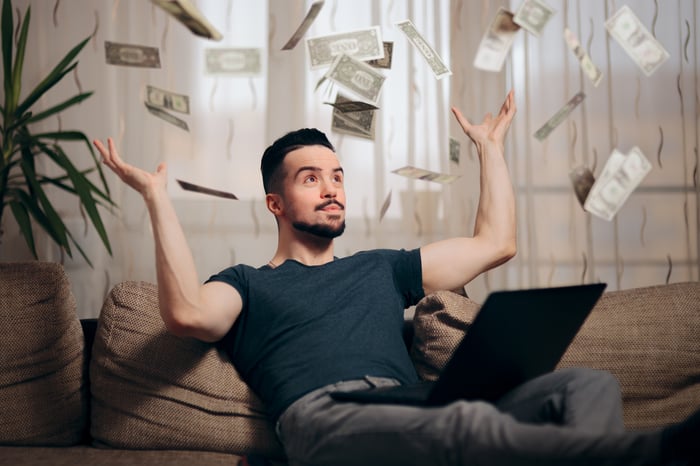 It was the outsize short position in video game retailer GameStop (GME -4.49%) that got investors in a Reddit subforum to band together to buy the stock. Noticing the number of shares sold short exceeded the number that existed, they bought out-of-the-money options, which forced the option sellers to buy the underlying stock to hedge their risk.

That caused the stock to rise, which created this self-perpetuating feeding frenzy of buying more options to cause more stock to be bought. In the wake, GameStop's stock is up 447% this week and is nearly 1,915% higher in 2021.

It's estimated short-sellers lost $5 billion on GameStop stock, leading traders to look for other names that had big short bets against them, like AMC Entertainment (AMC -6.74%) and National Beverage (FIZZ 0.53%). Bed Bath & Beyond surfaced, too. 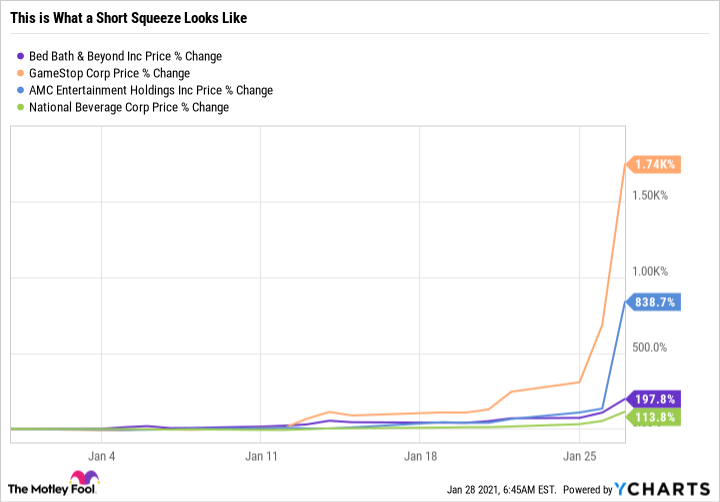 Of the 150 stocks that are heavily shorted (or have more than 20% of their shares outstanding sold short), 118 are trading higher over the past week and more than 90 of them are up by double-digit percentage rates. It's even more dramatic year to date, with nearly 80% showing double-digit gains.

But what goes up must come down, at least in instances where a stock's sudden burst higher is divorced from a company's fundamentals. And in Bed Bath & Beyond's case, although investors have reason to hope the retailer can grow once more, there's no good argument in favor of the shares' having doubled in value in the past week or tripled so far this year.

That's why investors shouldn't trade their hope for the hype. Bed Bath & Beyond is focused once more on its core operations after having shed virtually all its ancillary businesses. Gone are Cost Plus World Market, Christmas Tree Shops, One Kings Lane, and PersonalizationMall.com. Here to stay are the primary chains of its namesake stores buybuy BABY and Harmon Face Value.

As it weeds out the underperforming stores, Bed Bath & Beyond is committed to remodeling those that remain while also spending $250 million over the next few years to modernize and improve its supply chain.

The retailer still has more work to do. Fiscal third-quarter sales were down 5% year over year and net sales are down 18% year to date, though a portion of that is tied to selling off its extraneous operations. When calculated according to generally accepted accounting principles (GAAP), net losses also nearly doubled in the third quarter, but on an adjusted basis Bed Bath & Beyond reported its second consecutive quarter of profit growth.

CEO Mark Tritton looks like he's doing a bang-up job of taking a retailer on the verge of collapse and making it into a stable business that has a good shot at being a force in home goods once again.

That is a fine reason to invest in Bed Bath & Beyond's stock; just don't do it because you want to catch the tail of a hype machine. When the short-sellers finally capitulate and the internet randos running up the stock finally move on to the next hot topic, that's when investors with a long-term investment horizon should be emboldened to buy in.