Please ensure Javascript is enabled for purposes of website accessibility
Log In Help Join The Motley Fool
Free Article Join Over 1 Million Premium Members And Get More In-Depth Stock Guidance and Research
By Rekha Khandelwal - Feb 2, 2021 at 8:03AM

Shares of fuel cell maker Ballard Power Systems (BLDP 6.07%) have surged 45% so far in January, after rising 225% in 2020. An extremely positive outlook for the promising technology is driving fuel cell stocks higher. Adding to the momentum is governmental support for advancing fuel cells. But despite widespread enthusiasm, it may not be a great idea to buy Ballard Power stock right now. Let's see why.

Ballard Power's operations go back more than 40 years, though it was listed in the U.S. 25 years ago. Since its U.S. listing, the fuel cell manufacturer has grown its revenue nearly 10-fold. Ballard Power's key focus markets are Europe, China, and California -- geographies that are leading the transition to cleaner energy sources. It has made good headway in each of these markets.

The recent growth of fuel cell electric vehicles (FCEVs) in China is particularly impressive. While the U.S. currently has the highest number of FCEVs on the road, China recorded the most new sales in 2019. In the buses and light-duty trucks segment, China has the lead. The country accounted for 97% of all fuel cell buses and 98% of all fuel cell trucks in use worldwide at the end of 2019. China's government has implemented policies supporting fuel cell technology and is targeting 1 million FCEVs and 1,000 hydrogen refueling stations by 2030. Ballard Power controls 45% of China's FCEV market, so it's well positioned to benefit from this growth.

Ballard Power also has a strong position globally in the fuel cell buses segment. It has more than 80% share in the European market and 95% share in the California market.

While Ballard Power's revenue growth looks impressive, it has been lagging its peers recently. 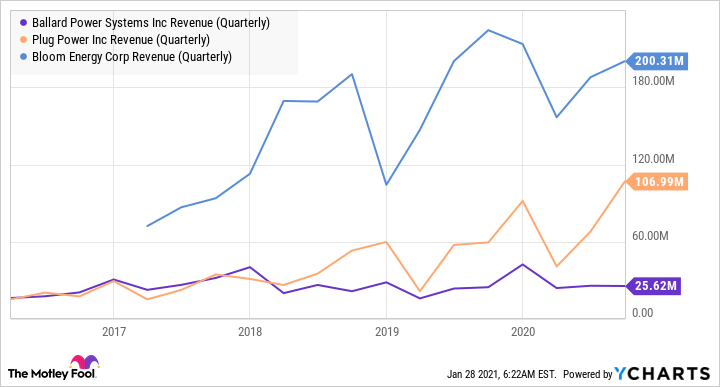 More importantly, the company's top-line growth doesn't gets translated into bottom-line profits. Ballard Power has been incurring losses through all these years of revenue growth. 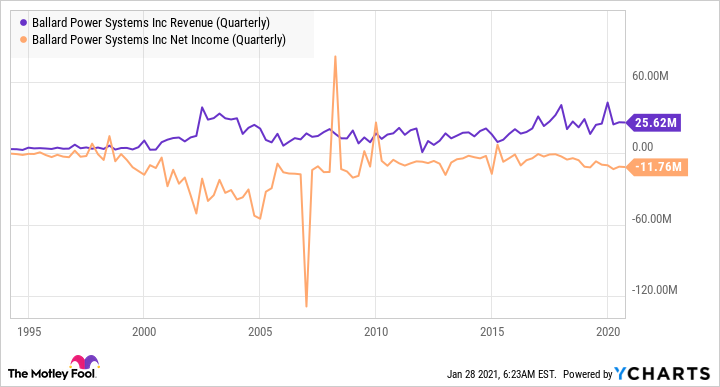 What's more, it doesn't have any concrete plan toward profitability -- even today. But with falling costs and increased fuel cell adoption, Ballard Power is well placed to become profitable. Certainly, it makes more sense to analyze what the company may achieve in the future, rather than dwelling on how it fared in the past. Let's focus our attention on that.

While there are several roadblocks to the widespread adoption of hydrogen fuel cells, let's assume that it pans out as Ballard Power estimates. The company expects around $5.2 billion in revenue in 2030. That's a compound average growth of 46% annually, a lofty target. But let's say it manages to achieve that.

Based on the revenue for the last four quarters and the average diluted shares outstanding at the end of 2020, Ballard Power stock is trading at a price-to-sales ratio of nearly 70. 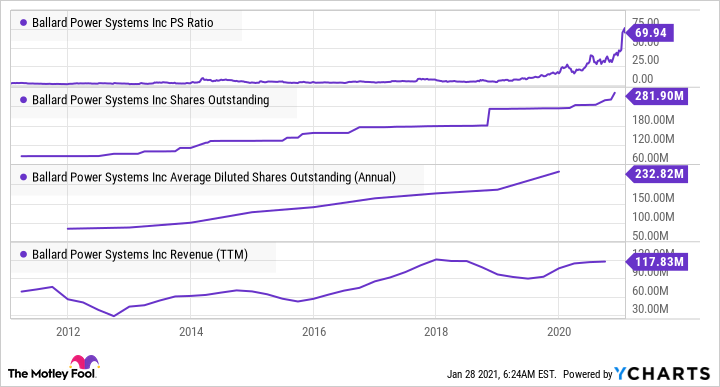 Let's just assume that the number of shares outstanding doubles in the next 10 years -- a very conservative assumption if the company grows revenue at the rate it is hoping, and considering that the shares outstanding have already doubled in just the last five years. Even then, the company's price-to-sales ratio at $5.2 billion revenue is 3.7 -- much higher than the broader market today. And we are talking about revenue that the company may generate 10 years down the line.

This calculation shows the extent of Ballard Power System stock's overvaluation. The stock has a market capitalization of around $10 billion today, with annual sales of roughly $100 million, and no profits. To me, it doesn't make sense, unless the company has some technology or know-how that can't be replicated. But that doesn't seem to be the case.

If making hydrogen fuel cells does become profitable someday, bigger and financially stronger players would likely enter the market, pressuring margins and commoditizing the product. For that reason, I would stay away from Ballard Power System stock at least until the company shows profits or the stock trades at a level more in line with the current financial situation of the company.