Please ensure Javascript is enabled for purposes of website accessibility
Log In Help Join The Motley Fool
Free Article Join Over 1 Million Premium Members And Get More In-Depth Stock Guidance and Research
By Jason Hawthorne - Feb 2, 2021 at 6:12AM

A new leadership team is betting that it can make long-read genome sequencing more competitive.

In the world of genome sequencing, Illumina (ILMN 1.13%) is the undisputed market leader. Pacific Biosciences of California (PACB 3.39%), or PacBio, has been viewed as more of an also-ran since it went public in 2010. Its "long-read" gene sequencing technology was traditionally less accurate than Illumina's competing "short-read" approach, and it comes at a higher cost.

However, after new leadership was brought on and a product update was delivered, its shares have jumped by 700% since the beginning of August.

Is the company finally ready to compete in the growing $5 billion gene sequencing market, or will this hot stock blow up shareholders' portfolios when reality sets in? 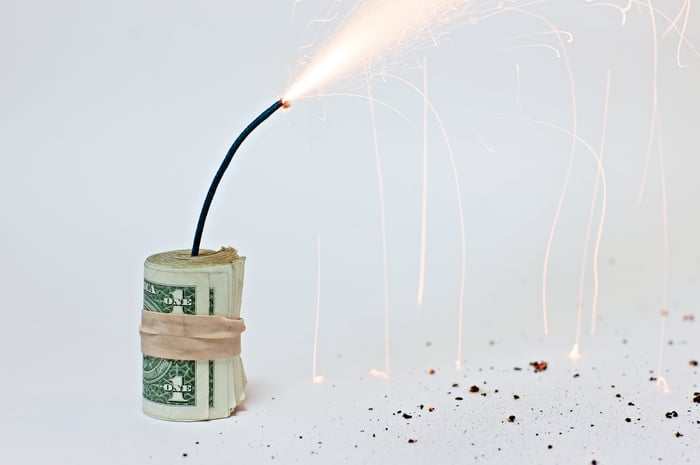 If it weren't for the Federal Trade Commission (FTC), PacBio would already be part of Illumina. Plans for a $1.2 billion merger that was first announced in November 2018 fell apart in January 2020 after the agency objected on anti-competitiveness grounds. For its trouble, Illumina paid PacBio a $98 million termination fee.

After that, PacBio hit the reset button, announcing a new CEO at the beginning of August, a new CFO in September, and a new chief operating officer and chief commercial officer during the fourth quarter. In the midst of the management overhaul, the company launched its Sequel IIe system, which lowered the cost and data processing requirements for long-read sequencing. The market definitely sees the potential. After the recent run-up in the stock price, PacBio's market capitalization has now grown by a greater percentage than Illumina's over the past decade. However, Illumina's stock price is up by 540% over that time, compared to only 116% for PacBio, as the latter has had to continually sell new shares to raise money and keep paying the bills, diluting its stockholders. 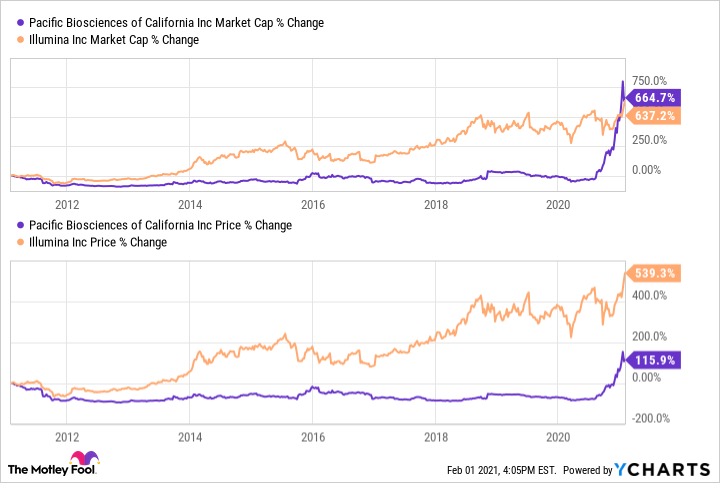 All of the excitement will need to translate into financial results if the stock is to maintain its recently achieved altitude. For now, PacBio's customers are reopening from shutdowns, and utilization of its systems is back to pre-pandemic levels. However, COVID-19 delayed several large projects and erased the typical government orders at the end of their fiscal year, which closed Sept. 30. Management guided for some improvement in the fourth quarter compared to earlier in 2020, but year-over-year sales declines are still expected.

Thanks to the merger termination fee from Illumina, the company was sitting on more than $200 million in cash at the end of the third quarter, and it added $87 million to that cushion by selling more shares in November.

A lot to live up to

The stock market is forward-looking, and shares of PacBio have definitely gotten ahead of results, but perhaps not that far ahead. During the company's third-quarter earnings call, its new CEO pointed to a strong sales pipeline, as well as plans to dramatically increase the size of the global salesforce, which stood at about 20 people in November. The cash on the balance sheet will come in handy as the company does not generate funds from operations, and has acknowledged that it will take a few quarters to get new salespeople on board and trained.

Although short-read gene sequencing has been the standard, PacBio is betting that its new instrument can increase the number of applications where long-read sequencing is cost-effective. The two approaches are mostly complementary, so the company won't have to unseat Illumina to grow. However, it will require customers to purchase additional equipment, which can be a harder sell in times of economic uncertainty. Long-read gene sequencing may be essential for reading some portions of the genome -- among them, areas that may hold the keys to understanding conditions such as autism and Alzheimer's disease -- but Illumina isn't likely to stand still on the technology front.

PacBio could be on the cusp of living up to high expectations, or it could be poised to continue a long history of disappointing shareholders. As the pandemic is brought under control, investors should be able to gauge how eager customers are for the new Sequel IIe product. Over the next few quarters, they should also expect updates on how quickly the new leadership team is growing PacBio's salesforce and how well the group is performing. If the company stumbles, management will need to issue more shares to buy itself more time. If that happens, the stock could lose much of the progress it has made over the past six months.