Please ensure Javascript is enabled for purposes of website accessibility
Log In Help Join The Motley Fool
Free Article Join Over 1 Million Premium Members And Get More In-Depth Stock Guidance and Research
By Zhiyuan Sun - Feb 3, 2021 at 7:19AM

This marijuana stock once turned its early investors into multi-millionaires -- assuming they sold at the right time. Can it make investors rich again?

In 2018, Tilray (TLRY) reached the pinnacle of the Canadian marijuana craze. Within a month of its IPO, the stock shot up from $17 to $300. That monstrous rally was fueled by a short squeeze that pitted retail enthusiasts against institutional bears such as Citron Research -- not unlike what's currently happening with GameStop (GME 0.92%).

However, just when shareholders' initial investments were multiplying many times over, investors began noticing the company's lack of fundamentals and exited en masse. Now more than two years since the roller-coaster ride, Tilray's shares are down over 90% from its all-time highs.

As it turns out, when a bubble bursts, the stock price can remain severely depressed for an extended period -- and undervalued -- even when the underlying company's fundamentals begin catching up. Market participants are wary of jumping in due to the fear of another capitulation. That said, I believe that Tilray's fundamentals are improving, and it's a matter of time the market will recognize its potential. 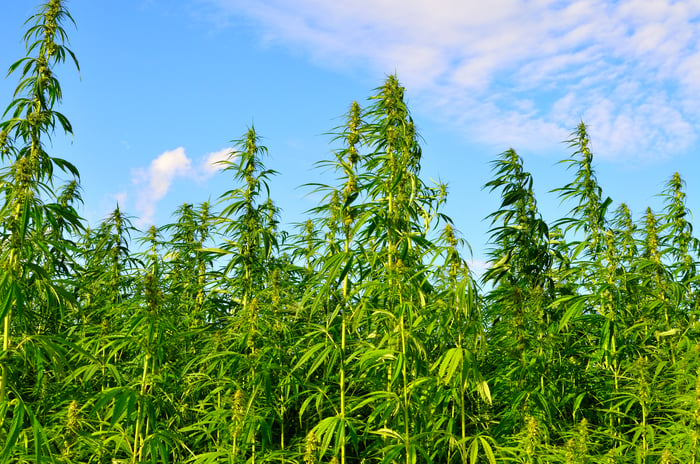 A merger in the nick of time

Ever since Tilray's bubble burst, its stock hasn't seen significant movement upwards, until now. The company will merge with its fellow pot grower Aphria (APHA) this year to create the world's largest cannabis producer, under Tilray's trade name. Its expected combined pro-forma annual revenue of CA$874 million will surpass the previous record set by Curaleaf (CURA -1.36%) (CURLF -0.99%) of CA$842 million.

Tilray will integrate its expertise in medical cannabis with Aphria's diversified product line, ranging from vapes to edibles to oils and capsules. Revenue synergies aside, Aphria-Tilray also expects to save CA$100 million over the next 24 months in operating costs due to the deal. Over the past year, the two pot growers increased their operating income less non-cash expenses (EBITDA) almost 19-fold from just CA$1 million.

Its products are available in over 29,000 retail locations as well as 10,000 restaurants and bars across the nation. The company can produce 400,000 barrels of craft beer per year and manages to sell over 230,000 barrels. SweetWater is just what Aphria needs to expand southward and tackle the $20 billion U.S. marijuana industry.

Besides, Aphria also has a sizable presence in Germany selling medical cannabis. In fact, over half of the company's revenue comes from distribution sales from its German subsidiary, CC Pharma.

Last but not least, Aphria also commands a leading position in its home country. Together with Tilray, the two giants will hold a 17.3% market share in the Canadian cannabis market, putting it in the top position by a large margin.

Despite its accomplishments, Tilray stock is trading for about 10 times revenue, which is slightly below the industry average of 15.3 times sales. Overall, I expect Tilray to become a millionaire-maker stock once again -- and perhaps even exceed its previous all-time highs. Its shares, however, are priced in the context of a different reality than 2018.

Back then, investors hyped up marijuana stocks based solely on their theoretical production volume. Now, however, investors are more demanding. They want to see solid revenue growth than anything else. Given that Tilray and Aphria's sales are increasing dramatically, it will take perhaps a decade or so for Tilray's stock to truly reflect the company's potential. For those with a long-term buy-and-hold mindset, it is an ideal pot stock to own.