Please ensure Javascript is enabled for purposes of website accessibility
Log In Help Join The Motley Fool
Free Article Join Over 1 Million Premium Members And Get More In-Depth Stock Guidance and Research
By Christy Bieber - Feb 3, 2021 at 7:02AM

Buying stock is typically a carefully-researched decision based on the long-term viability of a company. In recent days, however, the hottest stock on the U.S. market was a struggling, brick-and-mortar video game retailer -- not exactly a business model that suggests explosive growth or even long-term viability.

How, exactly, did this happen and why? Through a series of unlikely events, GameStop (GME 1.42%) became a "meme" stock, with small investors driving up the price by creating a big buzz on social media.

Still confused? Since social networks helped send GameStop's shares skyrocketing more than 1,640% at its peak, why not let one of them -- Twitter (TWTR 1.51%) -- explain just what's going on. 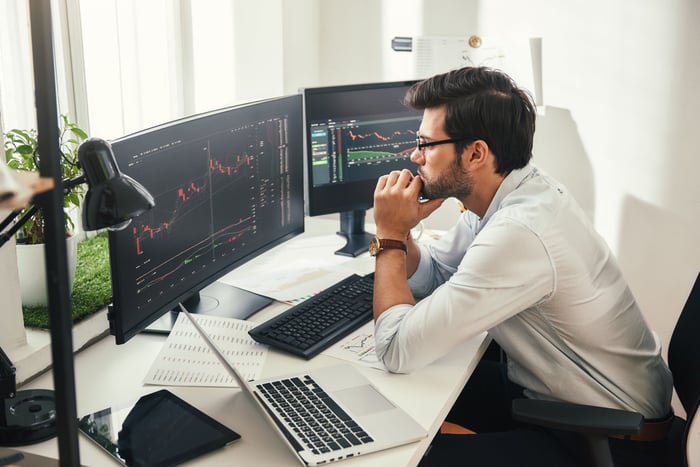 The GameStop saga all started in a Reddit subforum called r/wallstreetbets.

See, around a year ago, the founder of r/wallstreetbets published a book containing a warning for Wall Street. He cautioned that the industry's business model might not stand up to groups of retail investors who could harness the power of the internet to exploit weaknesses.

The warning signs were all there. This was from my book published a year ago. https://t.co/es4Hg40Kd7 pic.twitter.com/3ru2594Sd9

And that's exactly what happened. Reddit users, who were bullish on GameStop, noticed a whole bunch of hedge funds had shorted the stock, meaning they made big bets on its price going down.

For those who are interested, here is the post in r/wsb drawing up the play to gamma squeeze $GME and send the HFs to the hospital.

Redditors decided to execute a "short squeeze," buying up stock and harnessing the power of social media to encourage others to do the same.

As hordes of retail traders bought GameStop stock, the price of shares skyrocketed.

GameStop's value spiked to $24 billion in a matter of days as amateur traders bought stocks that Wall Street professionals had bet against. https://t.co/TolWnpsp3S pic.twitter.com/iBFFAM1aV1

Hedge funds had to cover their shorts by buying shares, which sent the price up further -- and Elon Musk amplified the whole thing.

The story took off, with even people outside of the financial world jumping on the bandwagon -- if not by buying stocks, then by cheering on what they saw as a takedown of Wall Street bigwigs by everyday people.

Your hedge fund collapsed? Sorry to hear that sir. I'm afraid I'm not authorized to give discounts- that'll be $18.95 pic.twitter.com/Xjq6aikatl

Unfortunately, many people who jumped on the bandwagon and bought GME may not have been fully aware of the risk they were taking on -- which was a big one. Warnings flooded in about the volatility of the investment.

Look gamestop stock can go to $1000 tomorrow or it can drop to $50. Please be careful with your money lol

Riding the GME meme train... to the moon! pic.twitter.com/RKgKiEoqKa

And started expanding their purchases to other stocks they thought had potential to execute a similar short squeeze.

GameStop, BlockBuster, Bed Bath & Beyond, AMC... it's like some kids remembered their favorite places in the mall 20 years ago and decided to invest in them pic.twitter.com/QOB8vLtOKk

As the stock price soared, however, some brokerages -- most notably Robinhood -- halted the ability to freely trade GameStop shares.

In light of current market volatility, we are restricting transactions for certain securities to position closing only, including $AMC and $GME. Read more here.https://t.co/CdJMjGAeFH

Robinhood got a lot of flack for this choice, most notably because it's an incredibly popular platform among the types of traders most likely to be participating in the GameStop frenzy.

This is so messed up @RobinhoodApp!! I'm limited and can't buy more than 1 share, so I try a fractional share and that's not available either? What happen to the free market?? Let the people trade! $BB $GME $AMC #DOGE pic.twitter.com/tw0kgZ3nB9

Lawmakers from both sides of the aisle also voiced their concern about why Robinhood stopped trading.

It later turned out the broker may have halted trading because it couldn't afford to let people continue buy GameStop on its platform, due to certain Securities and Exchange Commission (SEC) rules.

So it looks like Robinhood did not prohibit customers from buying GameStop or AMC as part of a conspiracy to protect short sellers. It did it because it literally couldn't afford to let them keep trading.https://t.co/0uFya2zDjr

Of course, the SEC took notice.

"we are working with our fellow regulators to assess the situation and review the activities of regulated entities, financial intermediaries, and other market participants." https://t.co/P3IMlwB62h (2/2)

And some Wall Street insiders decided to make some changes.

Citron Research discontinues short selling research After 20 years of publishing Citron will no longer publish "short reports". We will focus on giving long side multibagger opportunities for individual investorshttps://t.co/gP9HXzo7Nf

While this may all seem fun, a lot of regular people could end up suffering huge losses.

Regardless of the reason why, this is why you don't trade off short-term hype.

In these instances, there's A LOT more losers than winners. pic.twitter.com/zHuoetr7EQ

Which is why it's probably best to avoid taking stock advice from Reddit.

Idk why people are freaking out regarding taking stock advice from Reddit when the same people use WebMD....