Please ensure Javascript is enabled for purposes of website accessibility
Log In Help Join The Motley Fool
Free Article Join Over 1 Million Premium Members And Get More In-Depth Stock Guidance and Research
By Zhiyuan Sun - Feb 5, 2021 at 7:55AM

Here's why you should still pick up shares of this high-flying biotech.

Over the past decade, Vertex Pharmaceuticals' (VRTX 1.47%) shares have outperformed those of its biotech peers. During that period, it returned nearly 449% compared to the sector benchmark, the iShares NASDAQ Biotechnology ETF (IBB 3.00%), and its return of 430%. However, the stock is now down almost 30% from all-time highs after it pulled the plug on an experimental treatment for hereditary liver diseases last October.

Investors are now wondering if Vertex stock's run is over and it's about to enter the decline phase. On the contrary, trading at just 22 times earnings, I think that Vertex has now become seriously undervalued. Here are three reasons why the stock is a strong buy now. 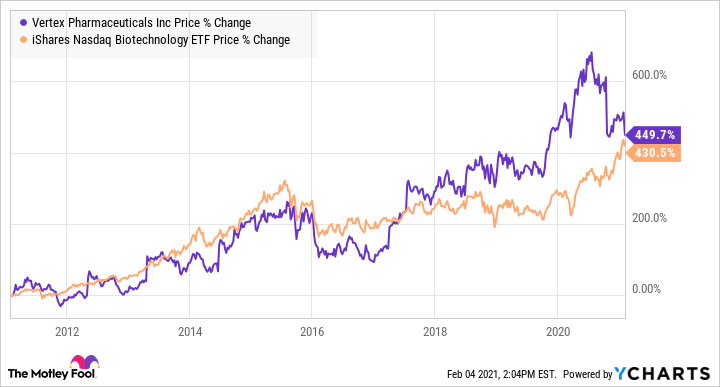 Vertex is currently the leader in the cystic fibrosis (CF) treatment industry. There are approximately 83,000 people with the condition in the U.S., Europe, Australia, and Canada. Approximately 50% of those patients are receiving one of Vertex's CF therapies. In fact, the company's triple combination drug Trikafta brought in $3.86 billion in sales last year, compared to just $420 million in 2019 when it was first approved. 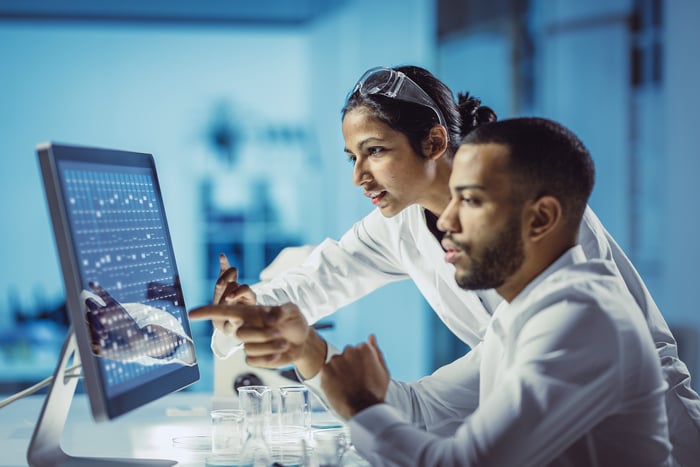 Vertex also plans to expand Trikafta's label to children aged six to 11 this year. It could potentially cover 90% of CF patients worldwide. The remaining 10% of patients need a gene therapy treatment -- which Vertex is also developing.

Given its advancements in treating CF, it should be no surprise that Vertex is highly profitable. Last year, the company brought in $6.20 billion in revenue and $2.72 billion in net income, representing a stunning 55% and 95% growth over the same metrics in 2019.

Right now, it has no debt whatsoever and over $6.6 billion in cash. This year, Vertex expects to increase its revenue to upwards of $6.9 billion. If it appears that the company's growth is stalling, I'd say it's just the opposite.

Together with CRISPR Therapeutics (CRSP 5.05%), Vertex is developing a gene therapy known as CTX001 to treat hereditary blood disorders such as sickle cell disease (SCD) and beta-thalassemia. A genetic mutation causes severe deformities in the shapes of red blood cells in SCD patients. If enough of these irregular, sickled cells clump up, they could constrict the body's blood vessels and cause a devastating condition known as a vaso-occlusive crisis (VOC).

As both conditions are genetic, currently approved drugs could only mitigate VOCs' occurrences and slightly improve hemoglobin levels. There are an estimated 360,000 infants born annually with either SCD or beta-thalassemia.

To the rescue comes CTX001. CTX001 is a transfusion featuring stem cells that are genetically engineered to produce high levels of fetal hemoglobin, which eventually mature into adult hemoglobin. During an interim phase 1/2 data release, 10 patients with SCD or beta-thalassemia were eventually either non-reliant on blood transfusions or had no VOCs post-treatment relapses. In addition, a few patients saw their hemoglobin levels approach those of healthy adults after infusion.

That's certainly very promising, and it gives the company a significant pricing advantage over novel therapies for SCD, which could sell for up to $15,000 per course of treatment. Even after a 50-50 revenue-sharing agreement with CRISPR, CTX001 would probably become a blockbuster biologic if approved, due to the prevalence of the indication it is addressing.

At the end of the day, investors should not condemn an established stock to the graveyard just because one drug program did not go as planned. The success of CTX001 on the market could more than make up for the hiccup. With the potential to expand into a multi-billion-dollar market outside of cystic fibrosis, I think that Vertex is still a hot biotech stock.