Please ensure Javascript is enabled for purposes of website accessibility
Log In Help Join The Motley Fool
Free Article Join Over 1 Million Premium Members And Get More In-Depth Stock Guidance and Research
By Dan Caplinger - Feb 5, 2021 at 5:05AM

Here's how to put hard-fought money to work in the stock market.

If you're an ordinary person and want to build wealth, then the stock market has been your biggest ally. Over long periods of time, stocks can take even modest amounts of money and turn them into life-changing wealth.

Many Americans are hoping that lawmakers in Washington will approve an additional $1,400 check from the federal government sometime soon. For many, financial struggles will force them to spend that money on immediate needs. But if you're fortunate enough not to need that money right now, investing it could grow that $1,400 into much more over time. Below, we'll look at three high-growth stocks that would've taken $1,400 invested a year ago and turned it into $5,000 today. 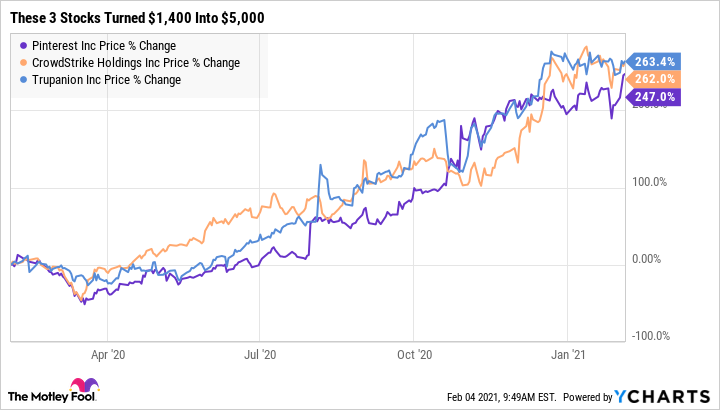 Social media stocks have been hit-or-miss over the long haul. Some have done extremely well, while others have struggled and remained volatile.

For the first year after its early 2019 IPO, Pinterest (PINS 6.50%) was underappreciated as an investment. More recently, though, investors have started to recognize its efforts, and they've gotten their reward with a 247% rise over the past year.

At first glance, you might be tempted to lump Pinterest in with all the other social media sites out there. But Pinterest is different, as its picture-focused platform has gathered an unusually positive and nurturing community together. Members often inspire and support each other to tap into their creativity, pursue wellness efforts, and take other steps toward self-improvement.

From a business perspective, Pinterest is starting to tap into monetization opportunities without jeopardizing the strong community it's attracted. International expansion and advertising efforts are picking up steam, and letting users take action with valued promotional partners has already led to greater revenue for Pinterest. Competition is fierce, but Pinterest's competitive advantage lies in the attractiveness of its ecosystem, and the social media company's own users are likely to defend that key trait to everyone's benefit.

Cybersecurity is more important than ever, and companies across the globe are undergoing digital transformations that require added levels of protection. CrowdStrike Holdings (CRWD 11.79%) has been at the forefront of a new generation of cybersecurity providers, and its stock has soared 262% since early February 2020.

CrowdStrike's cloud-native Falcon platform goes well beyond traditional cybersecurity efforts. Rather than focusing on building barriers between data servers and outside threats, CrowdStrike acknowledges the need to protect users and data wherever they are.

As more information resides in the cloud, making sure that corporate assets are defended properly is essential. CrowdStrike's platform detects threats wherever they are, and then most importantly, it communicates what it learns to every single one of its users. That way, if just one client gets attacked, the entire network knows about it -- and CrowdStrike is prepared for it.

The trend toward cloud computing isn't going to slow down anytime soon. That presents an ongoing opportunity for investors to tap into CrowdStrike's growth, as more big corporate clients are recognizing the value that the cybersecurity provider adds to their IT assets.

Finally, Trupanion (TRUP 8.84%) isn't exactly a household name for most investors. However, the pet health-insurance specialist's stock is the leader among these three companies, climbing an impressive 263% over the past year.

Trupanion specializes in veterinary medical coverage for dogs and cats. It's not the only player in pet health insurance, but its proprietary platform ensures that veterinarians and other medical professionals serving pets have access to medical records and get paid quickly. Trupanion is also amassing a useful database of pet health records, giving it the ability to detect trends, spot fraud, and even potentially give pet owners viable financial alternatives to euthanasia.

The COVID-19 pandemic dramatically increased the number of people owning pets, and that's created a spike in demand for veterinary services. Controlling costs is Trupanion's biggest value proposition, and rising customer counts show that people are catching on. Yet with an addressable market of tens of millions of dogs and cats that's far greater than its current subscriber base of roughly 800,000, Trupanion isn't going to run out of room to grow anytime soon.

These three stocks have paid off well in just a single year, but true investors aren't satisfied with a quick score. All three of these companies have the potential to keep on climbing from here and could eventually produce life-changing wealth for those long-term investors who stay the course. Given enough time and continued success for each of these businesses, a $1,400 investment in these stocks could turn into a whole lot more than $5,000.

Are 3 of the NYSE's Worst-Performing Stocks Ready to Resurface in 2022?