Please ensure Javascript is enabled for purposes of website accessibility
Log In Help Join The Motley Fool
Free Article Join Over 1 Million Premium Members And Get More In-Depth Stock Guidance and Research
By Robert Izquierdo - Updated Feb 3, 2021 at 10:17AM

Learn about some key considerations before deciding to invest in this IT security company.

CrowdStrike (CRWD -5.96%), founded in 2011, is a newer player in the IT security space. Yet it's already experiencing phenomenal revenue growth.

Is it worth investing in this hot stock? Consider these three factors before making an investment decision.

Let's dissect these factors in more detail to help you evaluate the company. 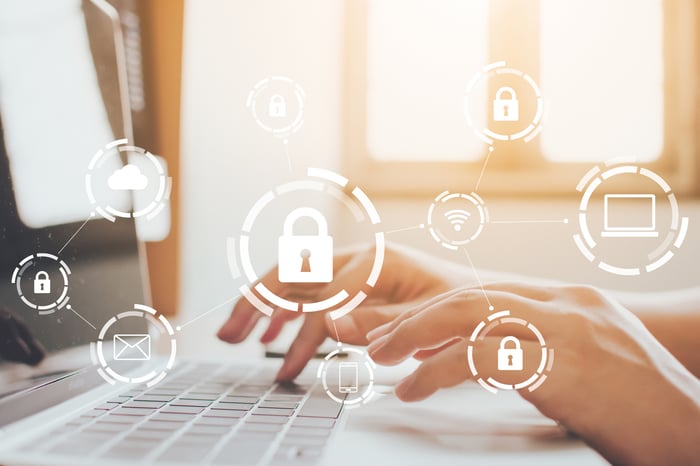 CrowdStrike has enjoyed several quarters of continuous growth because businesses are embracing its IT protection technology, even over cheaper rivals. I've worked in IT for many years, and can see why.

CrowdStrike's Falcon platform is impressive. It lets you effortlessly manage the security for thousands of computing devices.

Many corporations need this kind of easily scalable solution as employees are using an ever-expanding number of devices for work. Laptops, mobile phones, and other machines all require security, particularly in today's growing remote work environment.

CrowdStrike's toolset enables IT teams to set up security in minutes, while competitor solutions can take hours or even days. And Falcon was built from the ground up as a cloud-native platform.

Many older competitors bolted cloud-based capabilities onto existing technologies. This was done after cloud adoption took off, making these rival technologies more cumbersome.

Thanks to its platform's compelling attributes, CrowdStrike has witnessed strong adoption. The company concluded its previous fiscal year, ended Jan. 31, 2020, with 5,431 customers subscribed to its services. By the fiscal third quarter ended Oct. 31, subscriptions rose 55% to 8,416.

This customer growth led to steadily increasing revenue over the past year. 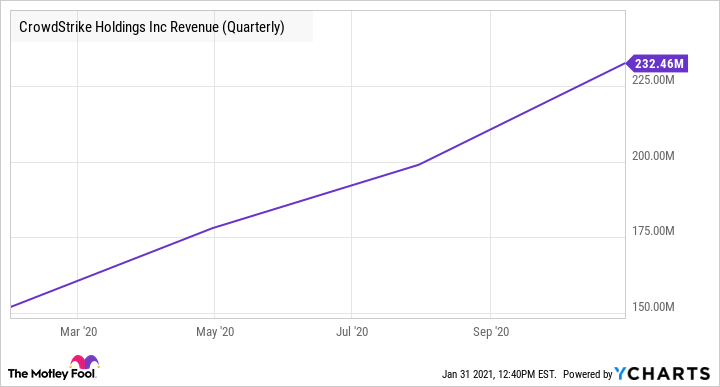 CrowdStrike's strong subscriber growth is impressive considering its security services are not cheap. Its base offering costs $8.99 per month for every protected device. Competitor McAfee starts pricing for as little as $2.59 per month.

It makes sense that businesses gravitate toward CrowdStrike's robust features and ease of use. But the Falcon platform has one potential downside, and it's significant.

While CrowdStrike's platform is impressive from a customer use perspective, here's the rub. When it comes to actually stopping cyberattacks, independent testing rated the product lower than many competitors.

AV-Comparatives tested CrowdStrike's platform against real-world cyber threats, releasing its results toward the end of last year. CrowdStrike came in 14th against 18 other security companies.

The test results were released after CrowdStrike's third quarter, so how much this impacts CrowdStrike's subscriber growth won't be clear until its fourth-quarter results are released later this year.

By all other measures, CrowdStrike is a compelling investment. Its year-over-year third-quarter results were amazing.

CrowdStrike's net losses also shrunk from $35.5 million to $24.5 million. It's common for tech companies to lack profitability, but CrowdStrike reducing its net losses is a great sign of its increasing financial strength.

CrowdStrike's less-than-stellar product performance in independent testing is concerning. Add to that the fact CrowdStrike battles with the likes of McAfee and VMware for clients in a crowded IT security space, and the situation looks ugly.

Right now, CrowdStrike offers an appealing platform. But if IT professionals read the test results and become concerned, company growth could slow. There are just too many alternatives to choose from.

Still, CrowdStrike's advantage is a cloud-native platform that offers a modern tech architecture and ease of use for its customers. And another big factor works in CrowdStrike's favor -- cyberattacks are on the rise.

According to the FBI, reported cyber threats more than tripled after the coronavirus pandemic began, coinciding with an increase in remote work. A staggering 3,000 to 4,000 cyberattacks per day have been reported.

With this kind of rise in cyber threats, IT security is a must for every organization. This reality gives CrowdStrike enough demand to continue seeing growth, even if it slows.

Now that you have a clearer picture of CrowdStrike's strengths and weaknesses, consider your risk tolerance before investing. For me, the company's strong growth combined with other metrics show it is still a compelling investment.