Please ensure Javascript is enabled for purposes of website accessibility
Free Article Join Over 1 Million Premium Members And Get More In-Depth Stock Guidance and Research
By Billy Duberstein - Jan 13, 2021 at 8:47AM

Don't miss out on the next big SaaS stocks.

In 2020 and over the past few years, several new-age software-as-a-service (Saas) companies have made incredible gains. In the immediate wake of the pandemic, these companies helped enterprises large and small go to a work-from-home posture, ward off cyber threats, and use data in new and novel ways.

Some investors may have missed the boat, having held off for valuation concerns. After all, many of these companies looked rather "expensive" to begin with as they reinvest to drive growth as fast as possible and make little in the way of profits. Some even post sizable losses.

One of the hottest of these stocks is cybersecurity software vendor CrowdStrike ( CRWD 3.64% ), which skyrocketed in 2020 and especially December, following revelations of the "Sunburst hack" against many companies as well as the U.S. government.

Still, many would have characterized CrowdStrike as expensive even before its meteoric rise, and sat out the party. However, if you had looked at two important metrics that many software investors look at, you might have been encouraged to invest. Learning these two crucial numbers could mean you won't miss out on the next big software opportunity.

The first metric to look at is the "Magic Number," first articulated by software investors in the mid-2000s. The metric works like this:

This equation yields a quarterly ratio. For an annual Magic Number, investors would take this metric from each of the prior four quarters, then average them.

In the real world, the metric basically shows how many annual dollars of revenue growth a software company generates from each dollar of sales and marketing spend. In general, a ratio of 0.75 is considered a good Magic Number.

CrowdStrike's Magic Number, as of its most recent December investor presentation, is 1.4, almost double what's considered strong. That's really, really good, and among the most efficient of any software stock you'll find.

Cloud software as a service is generally a high-gross-margin business, with the costs of goods primarily being data center or cloud servers. Last quarter, CrowdStrike's total gross margin was 73.5%, and its software gross margin was 76.8%, which is fairly high for any business, and very solid for a software business.

With high gross margins and a very efficient sales and marketing spend, as evidenced by the Magic Number, it's no wonder CrowdStrike has surged tremendously this year, despite its expensive-looking price-to-sales ratio and lack of profits according to generally accepted accounting principles (GAAP). 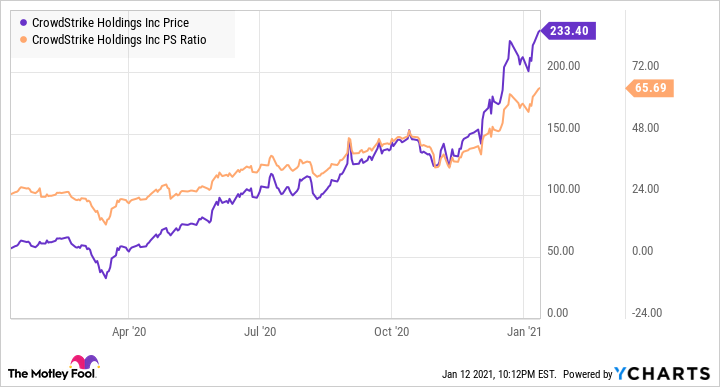 The Magic Number's cousin: The Rule of 40

The Magic Number is a cousin to the more well-known Rule of 40 for software investors. The Rule of 40 is another way of gauging unprofitable software companies, by adding a company's revenue growth rate to its operating income. If the sum of those two comes to more than 40%, it's sort of informally common knowledge that you've found a promising software business, even if that business's operating margins are negative.

CrowdStrike's ratio is an excellent 94%.

Looking at both metrics together

While the Magic Number and Rule of 40 are both distinct, each helps the software investor gauge the quality of software businesses that may be unprofitable or even posting big net losses. This is in contrast to more mature, profitable businesses, where a multiple of earnings or free cash flow may be warranted.

The Rule of 40 is a cruder but useful metric, while the Magic Number is more specific to the sales and marketing spend line item. I actually think the Magic Number may be more useful to investors. After all, a high Magic Number such as CrowdStrike's means there could be considerable growth to be had and a very large addressable market. It's also a useful metric for software CFOs in gauging whether they should pull back on sales and marketing spend or step on the gas. Basically, the higher the Magic Number, the higher the growth prospects. The Rule of 40 also offers similar clues but is more of a broader snapshot.

When looking at an exciting software stock, using not only the more popular Rule of 40 but also the less-well-known Magic Number in combination is a great idea. If both numbers are strong, you just might be on to a promising growth stock, even if it looks expensive on the surface.