Please ensure Javascript is enabled for purposes of website accessibility
Log In Help Join The Motley Fool
Free Article Join Over 1 Million Premium Members And Get More In-Depth Stock Guidance and Research
By Zhiyuan Sun - Feb 5, 2021 at 6:38AM

Here's why you might consider adding an enterprise software developer, an edge computing firm, and a coronavirus vaccine developer to your portfolio.

2020 was a fantastic year for the stock market, especially for those who had the patience and discipline to weather record levels of market volatility. Over the past 12 months, the S&P 500 gained a solid (and surprising) 15%. However, investors may no longer be satisfied with such a return since there were a lot of stocks that outperformed the benchmark index by several-fold in the same period.

During the early stages of a brand new bull market, it is common to see winners keep winning, while losers keep losing. After all, the best defense is sometimes a good offense. Today, let's look at three stocks that have already made investors rich over the past year -- and why their momentum is far from over. BlackBerry (BB -2.16%) is a firm that represents resilience. Since the disastrous loss of virtually all its market share in the smartphone sector, BlackBerry has now successfully reestablished itself as a market leader in enterprise software.

The company's cybersecurity services cover more than 96% of all online threats to enterprises. In fact, nine out of 10 of the world's largest banks utilize BlackBerry's security software. Blackberry also has a robust business segment dedicated to designing self-driving operating systems and vehicle software. As many as 19 out of 25 electric vehicle manufacturers, representing approximately 61% of market share, use BlackBerry's services. Over 175 million vehicles worldwide also have the company's operating software installed.

It should be no surprise that BlackBerry's services have a consumer retention rate of 90%. It brings in about $224 million in revenue per quarter and is breaking even. In its last fiscal year (ended March 30, 2020), the company increased its software sales by 26% compared to fiscal 2019.

The tech firm is well poised to take off, given the current craze for electric vehicles and the need for companies to upgrade their cyber defenses as working online becomes the norm. Since last January, BlackBerry has more than doubled investors' money. It was a temporary target of investor attention last week, along with other much shorted stocks, experiencing a short-sequeeze. However, BlackBerry remains a long term buy due to its outstanding performance in the cybersecurity and vehicle automation fields. 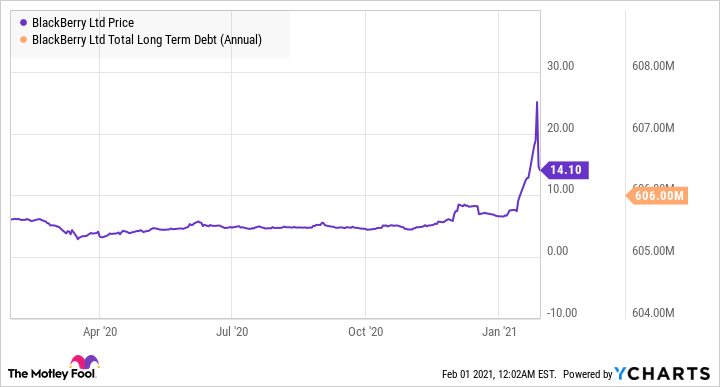 Fastly (FSLY -6.51%) is among the best-performing cloud computing stocks of 2020, returning 335%. Its edge computing network empowers companies such as TikTok to deliver their video content right to users' fingertips. Speaking of the matter, the company lost nearly 12% of its revenue last year as TikTok's Chinese parent, ByteDance, pulled the plug on Fastly's services due to looming U.S. restrictions.

However, that setback hasn't been enough to stop Fastly's momentum. Recently, independent investment bank Oppenheimer conducted channel checks on internet traffic. It found outstanding growth among all e-commercial, video streaming, and cybersecurity activity. As a result, I think that Fastly could blast past its guidance of $290 million in 2020. In 2019, the company brought $200 million in sales.

About 88% of its 2,047 customers are enterprise clients, with average spending of $753,000 per entity. Fastly currently holds an outstanding net retention rate of 141%, meaning its existing customers are spending more and more on its services. Over the past year, it increased its network capacity by nearly 100% to 106 terabytes per second. Due to its outstanding business and track record, this is a hot tech stock you will not want to miss.

With nearly 250 million doses in pre-orders for its experimental vaccine (NVX-CoV2373) and a target production goal of 2 billion doses this year, Novavax (NVAX 0.31%) is well on its way to helping put an end to the COVID-19 pandemic. It came one step closer to this goal after it published late-stage clinical trial data for NVX-CoV2373 on Jan. 28.

The results demonstrated that NVX-CoV2373 was 95.6% effective at combating the original SARS-CoV-2 strain. The more infectious U.K. coronavirus strains and the more resistant South African strains reduced the experimental vaccine's efficacy to 85.6% and 49.4%, respectively. But Novavax isn't the only one having problems in making an effective vaccine for the new strains. Moderna (MRNA -3.21%) and Pfizer (PFE -1.83%) are experiencing similar difficulties with their vaccines.

During the investigation, NVX-CoV2373 was well tolerated, with few occurrences of severe side effects. It is highly likely, if not a given, that Novavax's vaccine candidate could receive regulatory clearance. As for the low efficacy issue against the mutant South African strain, it is possible that patients could simply receive a booster shot after a two-dose regimen, although nothing has been confirmed as of yet. Since the inception of the project, Novavax has received more than $2 billion from government agencies to bring NVX-CoV2373 to market.

Given the superb efficacy of its vaccine candidate, robust financials, and excellent production capacity, I think Novavax should be a top biotech to buy right now. As a matter of fact, the stock is already up an eye-popping 4,070% over the past twelve months (with 2021 alone seeing a 151% jump). However, with the potential to profit tens of billions of dollars from the coronavirus vaccine, Novavax stock is still up for grabs despite having its market cap approaching $20 billion.