Please ensure Javascript is enabled for purposes of website accessibility
Log In Help Join The Motley Fool
Free Article Join Over 1 Million Premium Members And Get More In-Depth Stock Guidance and Research
By Adria Cimino - Jan 16, 2021 at 7:56AM

Investors in Pfizer (PFE 1.69%) and Moderna (MRNA 1.94%) may have breathed a sigh of relief when the U.S. Food and Drug Administration granted the companies' coronavirus vaccines Emergency Use Authorization in December. The risk of failure during clinical trials was in the rearview mirror. The companies began shipping vaccine doses to be administered. Revenue from their contracts with governments was right around the corner.

And then another risk emerged: new coronavirus variants. Over the past few weeks, new strains have emerged: a strain found in the U.K., one that started in South Africa, and more recently new strains in Japan and in Columbus, Ohio. Now, the big question is whether the Pfizer and Moderna vaccines can protect against these new versions of the coronavirus. Let's take a closer look at what we know so far. 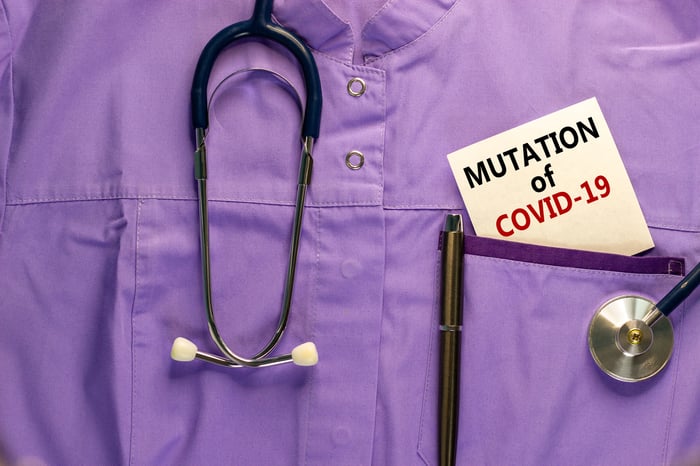 Focused on the spike

Let's start with a little background on the virus itself, the vaccines, and the variants. The coronavirus contains a "spike protein." These are literally spikes on the virus' surface that allow it to attach to cells and infect them. Vaccine makers are focused on this spike. In the cases of Pfizer and Moderna, their vaccines contain instructions so that the body can make a copy of this spike protein. Then the body produces antibodies to fight it. That way, if the actual coronavirus appears, this army of antibodies will recognize it and attack.

The newly discovered coronavirus variants each contain genetic mutations, or changes. And in each variant, the changes affect the spike protein. So now the question is: With these changes to the spike protein, will those antibodies still recognize it?

Moderna says that if it eventually must update its vaccine, the process wouldn't require big clinical trials, according to an article in MIT Technology Review. So, an updated vaccine could move from drawing board to market in a few months as long as regulators give it the nod.

As for Pfizer, the company recently conducted an in-vitro test against a mutation within the new strains that's linked to rapid transmission. The company said antibodies from people who were vaccinated neutralized the U.K. and South African strains. Still, the test didn't include the entire set of mutations from the new variants. Pfizer said more data are needed to confirm the vaccine's effectiveness against new strains. The company also said that if newer mutations eventually lead to a decline in vaccine efficacity, updating the current vaccine wouldn't be a problem.

Right now, new strains probably represent one of the biggest risks for coronavirus vaccine companies -- and their share performance. So far, it seems the Pfizer and Moderna vaccines can handle the new strains. But that doesn't mean this will be true for additional strains.

The good news is the possibility of a vaccine-resistant variant doesn't mean all of the companies' hard work will be tossed out. As Moderna and Pfizer both said, updates are possible. And this process isn't new. Researchers regularly update the flu vaccine to add new strains.

Still, that's not an ideal situation during a pandemic and after companies have already ramped up production of their original vaccines. It's bad news from a cost and logistics perspective.

Of course, we're not there yet. And that scenario may never happen. But if you hold shares of vaccine makers or plan to buy some, this is a point to watch with careful attention.