Please ensure Javascript is enabled for purposes of website accessibility
Log In Help Join The Motley Fool
Free Article Join Over 1 Million Premium Members And Get More In-Depth Stock Guidance and Research
By Alex Carchidi - Feb 6, 2021 at 6:55AM

Your portfolio could benefit from its group of soon-to-be-commercialized drugs.

Investing in biotech stocks is a risky endeavor, but sometimes you can eke out a return without facing as much potential trouble as usual. By identifying companies that are likely to report rapid revenue growth in the next few years, you'll be most of the way toward profit.

Of course, that's easier said than done -- except in the case of Lexicon Pharmaceuticals (LXRX 4.35%). Right now, Lexicon is putting the finishing touches on a few of its longest-incubating projects and awaiting the final go-ahead from regulators. If all goes well, it'll soon be a self-sustaining competitor in the diabetes space. Investors take note: This kind of opportunity won't knock twice. 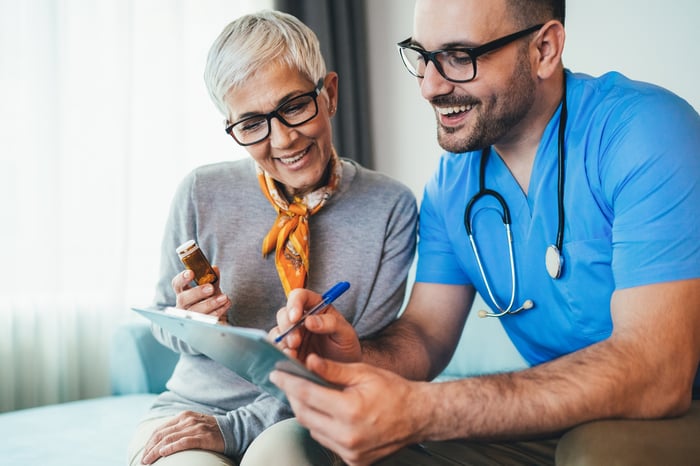 Why now might be the right time to buy

Last month, the company got the green light from the U.S. Food and Drug Administration (FDA) to submit a new drug application (NDA) for its therapy, sotagliflozin, which is intended to treat heart failure in patients with type 2 diabetes. This means that its recently concluded phase 3 clinical trial provides robust evidence for the drug's efficacy and safety in the eyes of the regulators, and it also suggests that Lexicon is on the cusp of commercializing the drug in the U.S.

Importantly, sotagliflozin is already approved as an adjunct treatment for type 1 diabetes in the E.U. And, in several phase 3 clinical trials last year, it was shown to be effective for type 2 diabetes (outside the context of heart failure) as part of a few different treatment regimens. So, the company will likely see significantly more sales revenue in the future, when it will have regulatory approval for several different indications. A couple of years down the line, Lexicon might even become profitable if the drug garners popularity in hospitals.

Lexicon also has a drug called LX9211 in phase 2 of clinical trials that aims to help patients struggling with diabetic peripheral neuropathic pain. Late last year, the FDA granted the project a fast-track designation. Thus, investors may not need to wait as many years as usual before seeing it bear revenue. But it'll still be a long while before the drug hits the market, and there's no guarantee of success -- just a promising start.

Despite the allure of potential new revenue on the horizon, skeptics will be quick to point out that Lexicon has yet to realize sales of any kind. Like many biotech companies on the stock market, it currently has no products to sell or license, and its only income is from drug development collaborations. Over the last 12 months, this totaled merely $32.52 million. And, since the end of its collaboration with Sanofi, the company has no allies with deep pockets that might help out with an investment.

In fact, the opposite is true. Lexicon needs to pay Bristol Myers Squibb for its right to develop LX9211, a drug that was originally discovered as part of a collaboration between the two companies. Bristol Myers will receive single-digit royalties if LX9211 is approved, and it'll also get tens of millions of dollars in payments for each approved indication and commercial milestone. That means investors should lower their expectations about the project's potential benefit to Lexicon's bottom line.

Sotagliflozin should advance soon to the next set of regulatory filings before commercialization in the U.S., and that's why this stock is worth buying promptly. It may take a couple of years for the drug's full revenue potential to translate into earnings, but the company will be expanding its sales and developing new pipeline projects in the meantime. For these reasons, be sure to hold the stock for the long term, and keep an eye out for any newly announced collaborations or pipeline programs that could seed future growth.