Please ensure Javascript is enabled for purposes of website accessibility
Log In Help Join The Motley Fool
Free Article Join Over 1 Million Premium Members And Get More In-Depth Stock Guidance and Research
By Zhiyuan Sun - Feb 10, 2021 at 7:10AM

These "blank-check companies" are taking over the most innovative and fastest-growing opportunities in the healthcare industry.

Special Purpose Acquisition Companies (SPACs) are essentially blank check companies with the backing of sophisticated institutional investors. SPACs raise money through an IPO solely to acquire another company. This setup allows retail investors to purchase, by proxy, a stake in small firms with a huge amount of growth potential that may not yet qualify for an IPO -- a privilege traditionally reserved for venture capitalists.

Such investment vehicles were wildly popular for much of last year; about 200 went public after raising more than $64 billion from investors. Today, let us look at two top SPACs in the healthcare field and how they can contribute to your portfolio. 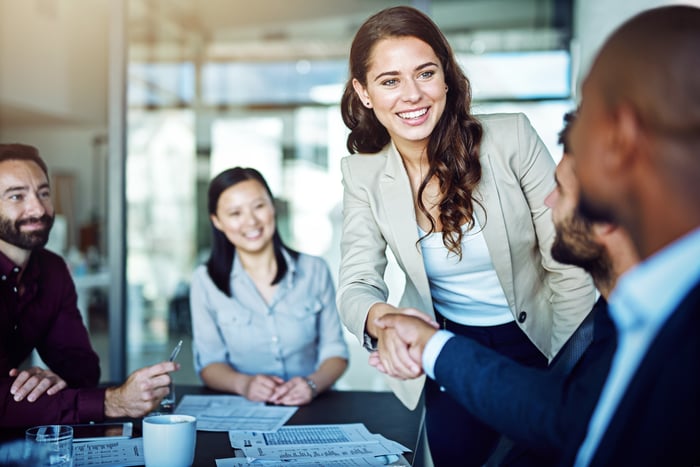 On Feb. 4, SPAC VG Acquisition Corp (VGAC.U) announced it would be acquiring consumer DNA analytics company 23andMe for $509 million in cash and $250 million in private investment in public equity (PIPE) financing. In addition, the multi-billionaire founder of Virgin Group and VG Acquisition, Sir Richard Branson, will be personally investing $25 million into the company. The CEO of 23andMe, Anna Wojcicki, will match that amount.

The deal values the DNA testing firm at $4.4 billion. After adjustments for nearly $1 billion in cash on hand post-transaction (and no debt), this leaves 23andMe at an enterprise value of $3.5 billion.

VG Acquisition's takeover could not have come at a better time. 23andMe is in dire need of cash to facilitate expansion efforts. In the short term, the company expects its revenue to decline more than 50% this year from a peak revenue of $441 million in 2019.

Its near-term woes are easy to comprehend. Right now, 23andMe offers consumers a snapshot of their ancestry after collecting a saliva sample in an at-home DNA test kit. The company also provides a health report of a person's likelihood to have or carry hereditary diseases, as well as developing several common illnesses (such as diabetes), based on the sample.

The problem? Both services cost a hefty combined price of $199. With over 10.7 million customers' DNA analyzed, it is safe to say that those who are interested in their racial or ethnic origins and can foot the bill have either already done such a DNA test with 23andMe or with its biggest competitor, Ancestry.com. As for the health diagnostic aspect, not all doctors trust the 23andMe test results' accuracy, and usually ask patients to undergo subsequent tests in a hospital lab setting.

Fortunately, 23andMe recognizes this problem and is actively trying to switch to a subscriber-based model. For $29 a year, it now offers its customers periodic insights on their cancer risk, reproductive health, diet, sleep, fitness injuries, and migraine risk based on their genetic data. Since its launch last June, the company has managed to enroll over 75,000 subscribers.

But the biggest reason why you should invest in 23andMe is its venture into drug development. Back in 2018, the company received the backing of large-cap pharma GlaxoSmithKline (GSK 2.20%) to discover new drug targets. Out of the company's 10.7 million member base, approximately 8.5 million consented to let 23andMe use their DNA data for research. By utilizing this enormous database, the company has already discovered eight possible drug candidates for clinical development and plans to increase that number to 37 by 2024.

23andMe is also projecting that it can get its revenue back to near-2019 levels (about $400 million) this year. Currently, the company is trading for about 8.7 times enterprise value to sales going forward (based on 2024 revenue estimates), which is quite a lot given the decline in sales it has faced. However, 23andMe can still revolutionize the $190 billion global pharma research industry with its unique drug design approach. That's the facet of the business I'm most excited about. Buying shares of VG Acquisition is a great way to pre-subscribe to the public offering of its healthcare backbone.

GigCapital2 (GIX) is a SPAC that will merge with two telemedicine firms, UpHealth and Cloudbreak, in the first half of this year. UpHealth provides virtual health consultations on a global scale, has a segment dedicated to online behavioral health, and has a digital pharmacy that can ship prescriptions to all 50 states. Once the merger completes, Cloudbreak will take their combined operations to the next level. The company specializes in providing medical interpreters during online doctor visits and offers its services in over 250 languages.

This year, UpHealth estimates it can bring $194 million in revenue, which is a substantial increase over the $115 million it brought last year. By 2022, the company projects it can generate upwards of $346 million in sales. It is also profitable on an operating basis, with an earnings before interest, taxes, depreciation, and amortization (EBITDA) margin of 12%.

UpHealth is currently seeing more than 100,000 consultations per month on its platform. It ships over 95% of prescription orders within 24 hours. There are also more than 160 psychiatrists providing mental healthcare on behalf of UpHealth.

The proposed deal values Uphealth and Cloudbreak at a combined enterprise value of $1.35 billion after adjusting for about $100 million in their cash balance after the transaction. It will trade at just seven times enterprise value to sales, which is a fantastic price to pay for a company that can grow its revenue by as much as 74% per year for the next two years. That arguably puts the acquisition target at the cheapest telehealth company in the sector. After the merger, the SPAC in the form of the combined entity, will trade under a single ticker, UPH, on the New York Stock Exchange (NYSE). I highly recommend investors who are interested in the industry consider adding GigCapital2 to their portfolios.

23andMe Is Going Public Via a SPAC. Here's What You Need to Know