Please ensure Javascript is enabled for purposes of website accessibility
Log In Help Join The Motley Fool
Free Article Join Over 1 Million Premium Members And Get More In-Depth Stock Guidance and Research
By Nicholas Rossolillo, Anders Bylund, and Billy Duberstein - Feb 14, 2021 at 6:00AM

There's a lot to like about these three growing tech names.

Looking for a new flame this weekend? Growing tech stocks have a lot to offer in an investment relationship. The world is going digital, so there's no shortage of growth in the decade ahead, and technology is highly profitable, too. Three Fool.com contributors think PayPal Holdings (PYPL 2.23%), Universal Display (OLED 1.07%), and Microchip Technology (MCHP -3.31%) are worth your attention right now.

The intersection of banking and technology

Nicholas Rossolillo (PayPal Holdings): Digital payments aren't new, but PayPal has done a ton of work to make them more mobile and touchless. Since the digital wallet company was spun off from former parent eBay back in 2015, shares are up over 670% as the app has become a modern household name.

But PayPal's run is far from over. The fintech company sits at an increasingly important intersection of banking and technology. In a world that has been pushed further down the digital road, flexible options to send money and make purchases is a must for consumers and businesses alike. PayPal and its subsidiaries (mobile money movement app Venmo chief among them) are providing the needed tools, enabling e-commerce, touchless payments in stores, flexible payment terms (its interest-free "Pay in 4" buy now pay later option), and a growing ecosystem of related services.

During the final quarter of 2020, payment volume using a PayPal service increased 39% to $277 billion, active accounts increased 24% to 377 million, and revenue was up 23% from a year ago. But what's really powerful about PayPal's business is its rapidly expanding profit margins. With its payments technology infrastructure largely paid for, new revenue is mostly profit. As a result, free cash flow boomed 50% higher. With an average of over $1 billion in cash flowing into its business every quarter, PayPal has the ability to invest heavily in new features on its apps and make acquisitions (like its purchase of e-commerce shopping tool Honey last year).

For investors looking for a stock they can love for a long time (at least a few years, but the longer the better), PayPal checks all the right boxes. Fintech will only grow in importance for the foreseeable future, and PayPal is a top name in next-gen financial services and e-commerce tools. 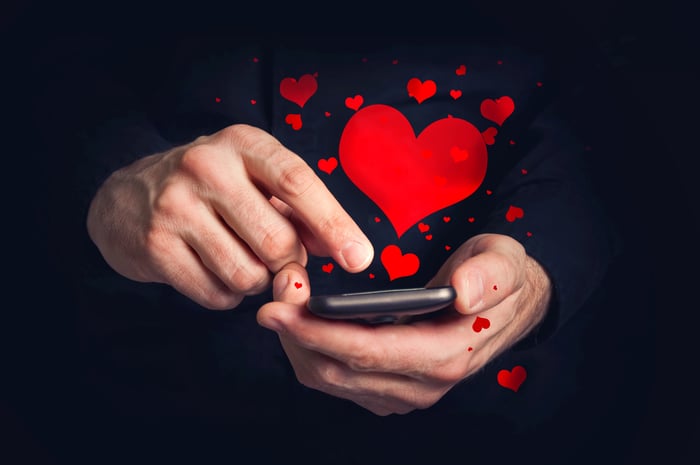 Anders Bylund (Universal Display): You already love this company's products, even if you didn't know you were using them. It's high time to fall in love with Universal Display as an investment, too.

You know that high-end smartphone you're using? Whether it's an Android or an iPhone, it probably sports an organic light-emitting diode (OLED) screen. Traditional LCD screens shine a light through a grid of colored pixels. In OLED screens, the pixels themselves light up with no need for a separate light source. This gives OLED screens perfect blacks, strong contrast ratios, and low consumption of battery power. OLED elements are great for smartphones and tablets, they're making their way into big-screen television sets, and will eventually become power-sipping light panels for everyday lighting purposes.

As the patent-holding developer of many key innovations within the OLED technology envelope, Universal Display collects royalties and resells the necessary chemicals whenever these screens or lighting panels are manufactured. Moving up from small-screen portable devices to living room centerpieces is good news for this company's revenue streams.

Universal Display's earnings have grown at an average annual rate of 27% over the last five years while revenue has risen by 16% a year. These figures include a sudden slowdown in 2020 due to the COVID-19 pandemic and the next five years should deliver even stronger growth on the rebound. The company's manufacturing partners are busy expanding their screen-building factories, gadget designers of all stripes are working out new ways to use flexible and transparent OLED displays, and Universal Display is not done developing patents for a larger slice of the total OLED revenue pie.

It's a lucrative business, too. This stock has gained 460% in five years amid surging profits and cash flows. Universal Display has so much spare cash laying around that it started paying dividends in 2017. The quarterly payouts have quintupled since then but the annual dividend yield still looks laughably small at just 0.3% -- because the stock keeps on growing almost as quickly. I'll tell you who's laughing now: It's Universal Display's investors, all the way to the bank. 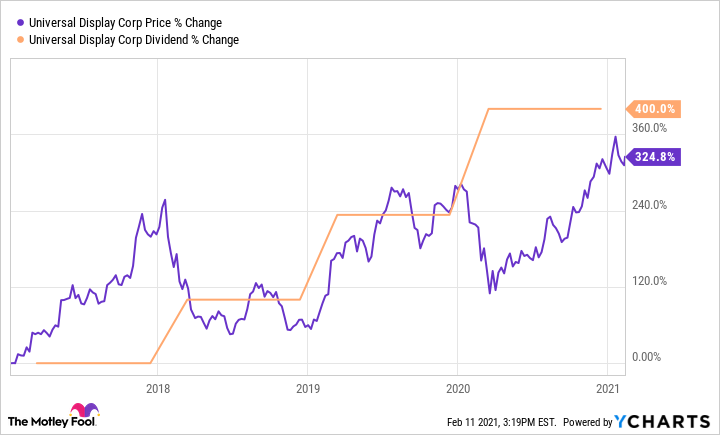 This diversified chipmaker is entering a new chapter

Billy Duberstein (Microchip Technology): Diversified chipmaker Microchip Technology is a name to put on your Valentine's Day list after posting a strong recent December quarter. It's no surprise, given that it's widely known many semiconductors are in a severe shortage. After two years of the U.S.-China trade war and then the COVID-19 pandemic, chipmakers cut back on capacity growth. However, new digital applications and an economic recovery are leading to a big boost in demand -- more than chipmakers have in stock.

Microchip is a large and diverse semiconductor company that produces microcontrollers (53.7% of revenue), analog chips (27.6%), FPGAs (7.3%), and licensing, memory, and other services across wide range of industries. In the recent quarter, Microchip grew revenue 3.3% over the prior quarter and 5% over the prior-year quarter, but was likely constrained by supply, not demand. In fact, management guided for 7.5% sequential growth at the midpoint, pointing to accelerating sales.

Not only that, but demand is apparently so overwhelming that management has implemented a first-ever Preferred Supply Program for customers. The PSP allows customers to get prioritized capacity, if they book 12 months of orders that are non-cancelable and non-refundable.

Clearly, we are entering a chip up cycle after several years of headwinds. But not only that, Microchip is entering a new phase, too. Two and a half years ago in mid-2018, Microchip acquired Microsemi, incurring a whopping $8 billion in debt in the process, just on the eve of the trade war downturn. Even though it was terrible timing, Microchip has since paid down $3.24 billion of that debt while also maintaining its dividend.

Management says it plans to get its leverage ratio (net debt to EBITDA) below three by the end of the year, at which point it would explore repurchases. Management also just raised the current 1%-yielding dividend by 5.8%, and plans to raise it on a quarterly basis as it de-levers going forward this year.

A less indebted company with rising dividends amid a semiconductor boom sounds like a good mix to me this Valentine's Day.