Please ensure Javascript is enabled for purposes of website accessibility
Log In Help Join The Motley Fool
Free Article Join Over 1 Million Premium Members And Get More In-Depth Stock Guidance and Research
By Zhiyuan Sun - Feb 17, 2021 at 6:31AM

These virtual care and online pharmacy platforms could make you healthy and wealthy.

A recent survey has found that 76% of Americans are now interested in using virtual health care providers, compared to just 11% who felt that way pre-pandemic. That consensus suggests that telemedicine companies could see exponential growth in their sales and bottom lines within the next few years. The current market opportunity for the sector in the U.S. alone amounts to $250 billion.

When it comes to investing in maverick industries, it's usually wisest to pick the companies with the best track records -- even after the market has bid them up -- over businesses with inferior track records but bargain-priced stocks. Let's look at three such winning companies today. 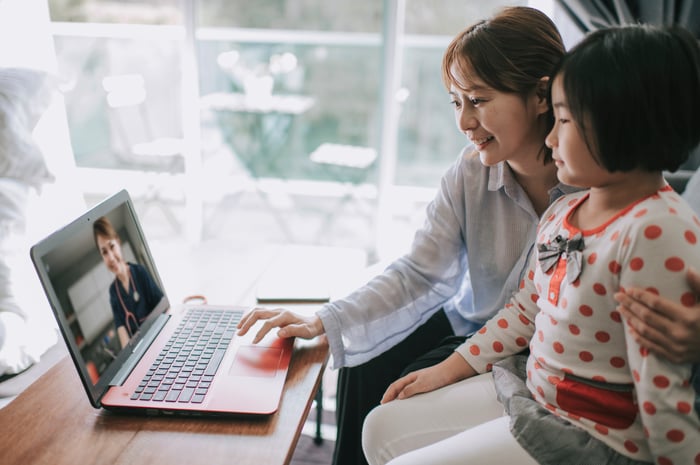 Teladoc Health (TDOC -6.35%) aims to become a one-stop platform for all of our virtual care needs, offering everything from physician consultations to behavioral health care to chronic illness management. Last year, it brought in about $1.09 billion in revenue and booked $110 million in operating income less non-cash expenses (EBITDA). Both were sizable increases from the $553 million in sales and $32 million in EBITDA it generated in 2019.

Last year, Teladoc provided patients with about 10.6 million medical visits, and more than 40% of Fortune 500 companies are now using its services. By 2023, the telehealth provider expects to increase its revenue and EBITDA to at least $3.45 billion and $591 million, respectively.

Given its rapid growth outlook, it shouldn't be a surprise that Teladoc stock isn't cheap. In fact, its shares are trading for almost 26 times revenue. While that's pretty expensive, the opportunities are enormous for Teladoc, which could further scale its business by integrating other healthcare operations that could be taken online. I believe that over the long term, Teladoc stock will prove well worth the premium investors must pay to buy it now.

Before the end of the current quarter, the SPAC GigCapital2 (GIX) will have acquired UpHealth and Cloudbreak. The acquisition company plans to merge the two to create one of the biggest telemedicine companies in the U.S., which will do business as UpHealth (soon-to-be ticker: UPH).

The current UpHealth provides virtual consultations, global telemedicine, telepsychiatry, and online pharmaceutical services. Meanwhile, Cloudbreak has a team of medical interpreters who can assist with virtual health care visits in over 250 languages, which will allow UpHealth to scale up internationally.

Last year, the two companies brought in about $115 million in combined revenue, and both were profitable overall. In 2021, the post-merger entity is forecast to increase that number to $194 million, and management expects accelerated growth to bring that figure to $346 million in 2022. In my mind, the unit that could be its biggest winner is its online pharmacy. Right now, UpHealth has a national fulfillment center for that purpose and holds pharmacy licenses in all 50 states.

If you're not a fan of Teladoc's expensive valuation, you'll like where GigCapital2 (UpHealth-Cloudbreak) is trading. After the merger completes, the two companies will have $105.5 million in cash net of debt and a combined enterprise value of $1.35 billion. At current share prices, that only represents a valuation of 7 times revenue. This is definitely a healthcare stock that investors won't want to overlook.

111 (YI -1.46%) is a leader in the online pharmacy industry in China. It partners with local drugstores to deliver a wide array of products to the consumer's doorstep, among them prescription pharmaceuticals, Chinese medicines, nutritional supplements, medical devices, contact lenses, beauty items, and reproductive products.

Management is nearing its goal of extending its reach to more than 300,000 pharmacies in China -- 57% of the country's total, serving more than 1 billion people. The prescription medicine market in China amounts to 300 billion yuan (approximately $46 billion) annually.

The sky is the limit for 111. The company intends to offer new branded medications on its platform. This is significant as many Chinese consumers could previously only afford cheap generic variants. It also has plans to offer products that would target chronic illnesses such as diabetes.

For all its growth and potential, you may be surprised to learn that the company is trading at just 2 times sales. As it turns out, investors have largely lost their trust in Chinese companies listed in the U.S. Just last year, Chinese coffee maverick Luckin Coffee (LKNC.Y 1.65%) was found guilty of accounting fraud for inflating its financials. That revelation led to a devastating decline in its share price. It has since filed for bankruptcy.

However, 111 is legit. A quick search of the company's flagship store on Chinese e-commerce platform JD.com (JD -1.65%) shows tens of thousands of positive consumer reviews for its popular items and a rating of 4.5 out of 5 for the store overall. Hence, I'd rate this company as one of the safer China-based American Depository Receipts to buy.

Why Teladoc Health Stock Rose More Than 7% on Wednesday